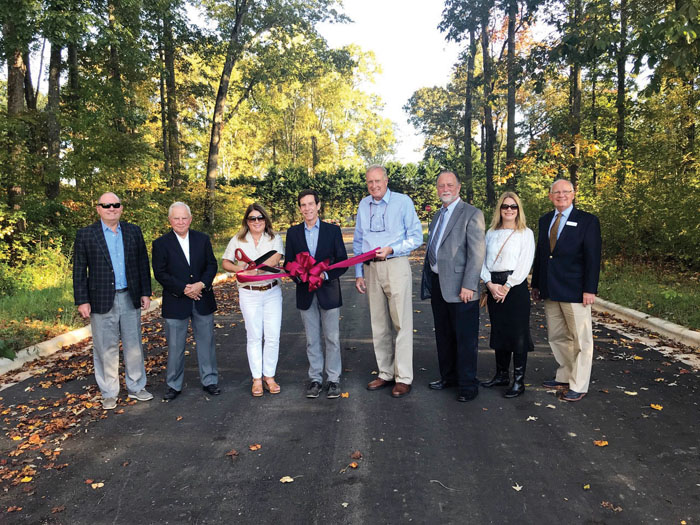 Photo courtesy of the Town of Bermuda Run Mayor Rick Cross (center) is flanked by Hillsdale Group principals Sally McGuire and Ken Bingham on the new Allgood Street in Bermuda Run during a ceremonial ribbon-cutting with the naming of two new access streets off of U.S. 158 in the Kinderton Commercial area off of U.S. 158. Also pictured are Town Council members, from left: Curtis Capps, Mike Ernst, Chris Fowler, Heather Coleman and Ken Peacock.

What’s in a name, even if it’s for streets? For Bermuda Run, the addition of two new access streets into the Kinderton Commercial area off of U.S. 158 proved to be a collaborative effort.

The town approved the naming of Allgood Street and WinMock Street in last Tuesday night’s Bermuda Run Town Council meeting and commemorated a public/private partnership with the Hillsdale Group by holding a ceremonial ribbon-cutting.

“These two new streets are a wonderful example of shared goals and resources between the public and private sector,” Mayor Rick Cross said. “This further leverages the town council’s desires to make investments in areas where infrastructure is already in place. The town is grateful for the partnership with Sally McGuire and Ken Bingham of the Hillsdale Group to cost share this project.”

Town Manager Lee Rollins said that in the discussion about road names, the council said that “maybe the developers have an opportunity to provide some input into what that’s going to look like.”

And so, Allgood Street, which terminates in front of Comet at Bermuda Run Apartments, got its name from McGuire, one of the partners with the Hillsdale Group, whose maiden name is Allgood. Then, the street closest to WinMock, a premier event venue, terminating between Advanced Oral & Facial Surgery and Coffey Law was named WinMock Street.

Rollins said that the new streets help encourage economic development and meet the objectives of the town’s Comprehensive Plan to work “to solve road capacity and traffic flow issues” and “to facilitate and promote an identifiable town center.”

Councilman Mike Ernst said, “I think we’ll look back and realize with these two streets that we’ve talked about for years needed to happen. The infrastructure is here to be able to draw businesses in. I think we are going to see the lion’s share of development over the next few years coming into this area.”

Also in last Tuesday night’s meeting, the council received an update from Rollins on other transportation-related issues, including the upcoming Festival of Lights at Tanglewood.

“It’s close to being the most wonderful time of year in this section of Davie and Forsyth,” Rollins said of the Festival of Lights, which opens Nov. 13 and runs through Jan. 1, 2021. “I want to give a lot of credit to NCDOT for taking the initiative to put together a couple of Zoom meetings with the Highway Patrol, Forsyth County Sheriff’s Department and Davie County Sheriff’s Department to all work together to be better at controlling, as best you can, traffic congestion.”

Rollins also mentioned the new four-lane road just inside the entrance to Tanglewood that winds through the old steeplechase area adding the capacity of more than 440 vehicles to help with the traffic.

Rollins added that the I-40 widening project, which recently was approved for the final phase of state funding, remains on schedule for completion in the first quarter of 2021 but that access to use the new pedestrian bridge won’t be available until construction is complete.

“And the timing is very good in that you allow me to let DOT know that we want to continue with the Blue Heron Trail project, where they have communicated that they will begin reimbursements in August of next year,” Rollins said. “So a lot of exciting things are happening.”

Cross also made one last pitch for Census 2020 and noted that Bermuda Run has received just over an 80% response rate, “putting us in rarified air for the state and country,” and that Davie County ranks No. 4 in the state with a 71% response rate.