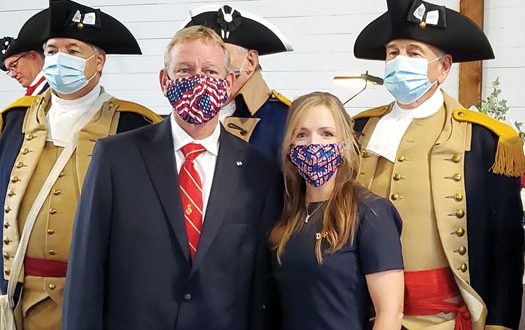 Dr. Pete Gilyard, who is the owner of the Clemmons Veterinary Clinic, was among the Sons of the American Resolution inductees in the recent Battle of Shallow Ford 240thCommemoration Ceremony at Huntsville United Methodist Church. His wife, Tabatha, was sworn in as a new member of the Daughters of the American Revolution. They are standing in front of the SAR Color Guard. Submitted photo.

The Battle of the Shallow Ford 240th Commemoration Ceremony was held Oct. 10 at Huntsville United Methodist Church. The ceremony was originally planned outdoors in front of the historic church but was moved inside due to inclement weather.

Her Patriot, Thomas Poindexter, fought in many battles for the N.C. militia. His wife, Elizabeth, and his daughters also served the Patriot cause by sewing letters in their petticoats, crossing enemy lines and delivering the letters to the proper parties. Thomas Poindexter and his family lived on the Yadkin River near where the Gilyards live today. He and Elizabeth are buried on a bluff of the Yadkin near Donnaha on what used to be their land.

Other new SAR inductees who were sworn in included Stephen Rantz, Joseph Weaver and Weston Parsons — who couldn’t attend, but his grandfather, Daniel, stood in for him.

Fred Learned, president of the North Carolina State Sons of The American Revolution Society, and past president of the Bethabara Chapter, served as host of the ceremony, which included the memorial wreath presentations along with the presentation of colors by members of the SAR Color Guard.

The Battle of Shallow Ford took place Oct. 14, 1780, exactly one week after the Battle of Kings Mountain. One Patriot (Whig) and 14 Loyalists (Tories) were killed during the battle. The Patriot, Capt. Henry Francis, was buried where he fell.

BANNER ELK — The 43rd annual Woolly Worm Festival may have been canceled this year due to COVID-19, but you... read more