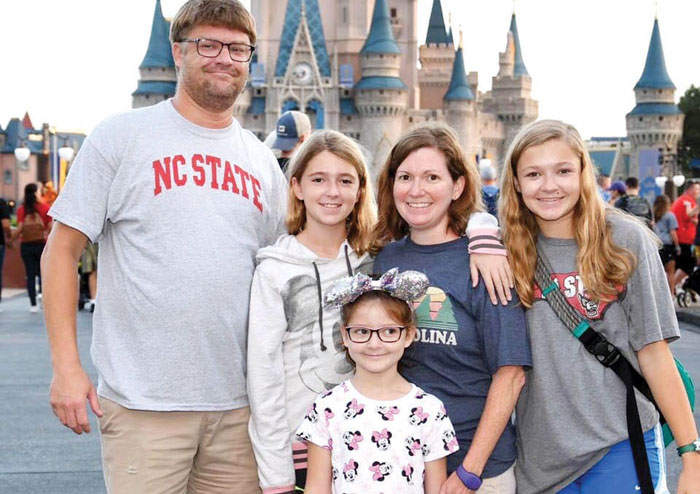 The Smith family. From left, Jim, Ella, Julie, Abby and Lara on the bottom.

Julie Smith found many signs early on in her life pointing to the roads to take. “From a young age I really leaned on science and math. My dad was an engineer and always gave me presents that encouraged an understanding of those subject matters. I had to work hard at it, but I enjoyed it,” explains Smith.

Naturally, Smith went to North Carolina State University in Raleigh when it was time to go to college. “I studied mechanical engineering,” mentions Smith. The rigorous program at NCSU and the co-op she was offered at Corning, Inc. prepared her for a career. “It’s funny because I really buckled down in college with my studies and didn’t focus on going out and having fun much. My dad even laughed and said that I probably should have had more fun while I was in school too,” says Smith. “But with my co-op I did quite a wide variety of experience working various jobs while I was there. Towards the end of my senior year I was getting to travel with engineers to work on fiber optic cables in various cities and places within North Carolina.”

The hard work paid off for Smith, when she graduated she was employed by Sprint. Smith was also making big changes in her personal life. She married Jim a year after college. “We had met when we were in third grade. We reconnected in middle school when we had the same group of friends,” explains Smith. Jim and Julie dated off and on for a bit before realizing that they had it right from the start. “After our first year of marriage Jim got a position at the U.S. Patent office in Washington, D.C. We didn’t have children and thought it would be a great opportunity,” notes Smith. “Jim had encouraged me to look for a position at the same government agency and it turned out to be a wonderful fit.”

The Smiths enjoyed living in D.C. as young professionals and newlyweds. “We stayed up there for about four years. When people would come visit us we’d do all the typical touristy stuff you could think of. But one of my favorite things to do was to visit the monuments at night all lit up. It was magical,” remembers Smith. “When we decided to have our first daughter, Abby, in 2005 we realized it was time to go back home. We had lived through 9/11 and the sniper attacks, and we wanted to do things differently for raising children. We were paying so much for childcare; we decided that one of us would stay home with the kids while we raised them. Jim had said he wanted to do it,” says Smith. “Our parents were thrilled to have their first grandbaby back home within driving distance.”

Smith was able to find a job in Winston-Salem very quickly. “I reached back out to Corning, Inc. in July 2005 and they had a process engineering role available. It was a great company to work for and they promoted from within. I got to experience leadership roles while Jim was home taking care of the children,” notes Smith. Daughters, Ella (born in 2007), and Lara (2012), joined the family during that time. “Knowing Jim was home taking care of our girls was a huge comfort to me. It really allowed me to focus on work when I was there, and know that he was handling their needs while I was doing so,” says Smith. “During this time, I also started a side hobby and began my own photography business. I started off asking people if I could take pictures of their children, and then it just grew. I really enjoy photography. It was also neat to see my two oldest children take an interest in it too.”

Although things were going very smoothly for Smith with her children and job, life threw her a curve ball. “I thought I would stay with Corning forever, but after 11 years they announced they would be moving to Charlotte. I could either move there with the family or commute. By this time, we had really established a wonderful community in Clemmons. We loved our church, Clemmons Methodist. So I found another position at Sonoco, a paper and packaging company as a regional quality manager. Much like Corning, I got to travel both internationally and domestically which I enjoyed,” says Smith. “Right before COVID-19 really hit they did business restructuring and my position was eliminated. Ultimately, I believe it was a blessing in disguise. Having to teach our children from home was a challenge we had never dealt with before. It was an all-hands-on-deck job,” explains Smith.

Smith briefly tried going back to work having been offered a job at Amazon. “I was the operations manager for them launching a new site in Kernersville. It was truly amazing to see the inner workings of Amazon, but the hours were 60-70 hours a week which was just not conducive to family life,” says Smith. “I stepped back last month from the position. The kids are still learning from home, and I want to find a place where I have a bit more flexibility with hours. I know it’s a bit of leap of faith, but I’m hopeful.”

Smith has made sure that her children, along with Jim are getting the best experience in their studies that are possible during COVID-19. “Our church, Clemmons Methodist, has been amazing. They’ve set up a virtual learning center for children. It’s been such a gift. There are stations for the kids when they are taking breaks to do things like art or corn hole, hot spots in the parking lot, and ways to encourage safe interaction for these children who miss being in the classroom. Currently they are working on securing another grant after the one we currently were awarded ends in December. I’ve enjoyed helping out over there with the kids. I know my own kids who go once a week have really appreciated the efforts of it,” explains Smith. “Our church has always been a huge part of our lives. We are involved with the youth group. It’s tight-knit group of kids, and very special to our family.”

Smith continues to focus on all the positives and blessings that have been afforded to her and her family. Like many families having to adjust to the “new normal” from COVID-19, she has found that things always turn out just as they are supposed to when you have a little faith.

New inductees sworn in at Battle of Shallow Ford…