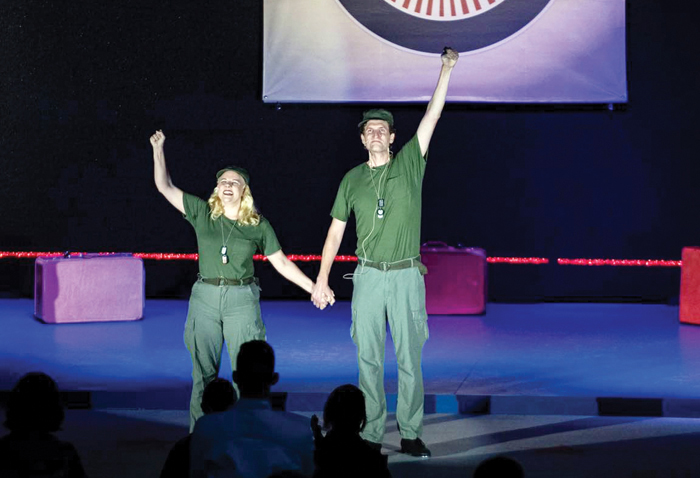 Erinn Dearth and Dan Beckmann perform in a “Letters From Home” performance.

WINSTON-SALEM — Letters From Home, the tap-dancing, joke-cracking USO-inspired duo made up of founder Erinn Dearth and self-proclaimed “tall guy” Dan Beckmann are now in preparation for a digital Veterans Day concert.

The show started performing in Winston-Salem in 2010 at the suggestion of Pat Dearth, a Coast Guard veteran and Erinn Dearth’s late father. For the past 10 years, the group’s mission has been to tour the country honoring our nation’s veterans, active military heroes and their families. They have taken on a new mission recently to unite the nation through music. The act has now toured over 40 states, and last year performed in Normandy, France, for the 75th Anniversary of D-Day. In 2019 alone, Letters From Home performed more than 160 shows worldwide.

The online show on Nov. 11 will be performed from Reynolds Place Theatre, thanks to the support of the Arts Council of Winston-Salem.

Though Letters From Home is usually on the road, touring many venues across the country in November, the duo has chosen to see the bright side of their tour being shut down. “Though we can’t hug and interact with our audiences like a normal show, we are definitely able to reach more veterans all across the world this way,” said Dearth. “Audiences can tune in from all 50 states instead of just whichever one we would have potentially been touring in, and it brings the world a little closer together.”