Stop and Save Mart gets new start in reopening 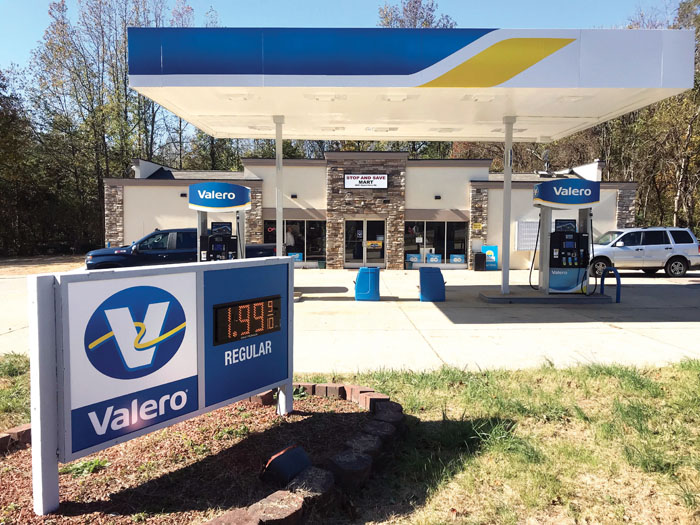 Stop and Save Mart in Clemmons was closed for two years after a robbery and fire in 2018 before rebuilding and reopening with a spiffy new store. Photo by Jim Buice, for the Clemmons Courier.

Man who was victim of robbery, fire in old store returns ‘to show my customers and my people we are stronger than they are’

David Slater cried. Several times. Who could blame him?

Here he was last week sitting behind the counter of the newly rebuilt and reopened Stop and Save Mart in Clemmons, recounting the story of the robbery and fire that pretty much destroyed the place two years ago when he was on duty.

Slater knows how close he came to dying and how fortunate he was to escape late that Saturday night in October 2018. He has battled to make his way back due to all the circumstances. He’s had good days and bad days.

“I wasn’t planning on coming back (to work at the store), but then I decided if I didn’t, they win. There’s no reason to hide, so I had to come back and show my customers and my people and friends that we’re stronger than they are. It’s a whole new place, but it’s still the same store.” 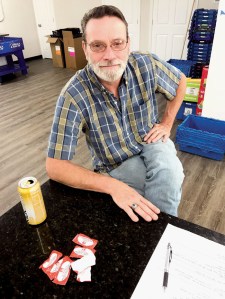 David Slater was robbed, tied up and doused in diesel fuel in the old Stop and Save Mart two years ago but came back when the store reopened because “there’s no reason to hide.” Photo by Jim Buice, for the Clemmons Courier.

The spiffy new store, which is owned by Raj Singh, finally reopened in October — a little more than two years after Slater completed treatments for cancer, going through 30 days of radiation and 14 days of chemotherapy.

He had to leave his job at Shop and Save during that time but told Singh when he completed his treatments that he would be willing to help, since he lived right down the road.

“It’s just call what it is,” Slater said. “He was having some issues with weekend help, and he came to ask me if I could help him out. I just picked the wrong weekend to work.”

It was near closing time on Oct. 20, 2018, when he was manning the store, which is located at the intersection of Styers Ferry and Dull roads. He was vacuuming a rug when he heard the doorbell and saw a couple of guys coming in.

“The only thing I sensed is when I tried to greet them, they never spoke,” said Slater, who added he made a second attempt and didn’t get a reply. “They just kept coming. Then you get face to face, and they tell me I need to open my register. And I refused three times. Well, he pulled out the gun, I went in there and gave them the money and then they tied me up in the corner and proceeded to rob the store.”

Slater said they threw him into the office, which is behind the front counter, and proceeded to tie his hands and feet and then started dousing everything in diesel fuel, including “pouring it all over me. So I’m in the floor there, and he’s wanting more money, and I told him there wasn’t any more.

“Then he throws a napkin down beside me on fire, and that one goes out, and then starts taking the lighter around the room. He closed that door and went out. I’m tied in the floor with zip-ties around my hands and feet on the floor doused in diesel fuel and flames are everywhere.

And then I said, “Am I going to die here, Lord? And I closed my eyes and continued to pray a little more, and out of nowhere when everything was shutting down, I heard the doorbell ring. That tells me someone entered or exited my building. So I opened my eyes, and I said, ‘not tonight, Lord, get me out of here.’ ”

“And I went crazy. I swung enough where my feet came loose. I was able to get up but can’t go up high because the fire is burning down, so I crawled on — fighting the fire above my head and got to the (office) door.

Slater managed to get through that door but said when he looked out, he saw the two men sitting in his truck “watching this place burn.” He eventually made his way to the front door. In the meantime, he was able to break his hands free but still struggled to push through the wrought iron security gate holding the door shut.

“I was able to get to the bottom of the glass door and saw they were gone,” he said. “I climbed  over to the door and pushed it, but it opens only so much, and I looked up and thanked God for cancer because I had been 36- to 38-inch waist before I got sick. I wouldn’t have got out that door right there.”

Through that opening, he said he screamed to the top of his lungs to try to get the attention of vehicles passing by before “one little white Honda buzzed around the corner, and they said they saw smoke coming out the front doors, and they pulled in that driveway. As soon as that boy opened that door, I screamed to call 911 and get me out of here, and the Lewisville Fire Department was here in 11 minutes. They said if they hadn’t have stopped and no one made any effort to see or stop here, I would have roasted like a turkey between the gates. I thank the Lord for everything he did.”

Amazingly, Slater was only in the hospital just that night, and after having X-rays on his lungs to make sure he didn’t “eat too much smoke” along with a decontamination since he was covered in diesel fuel and a few bumps and bruises, he was discharged.

But although he was cleared physically, Slater admitted that it’s been an emotional roller-coaster, saying that his biggest fear has always been fire.

“These visions I have in my head, I’ll have them the rest of my life,” he said. “I went into a deep depression when I wanted to hide myself and just put out the candles, but then you find yourself lonelier than you were before. There’s a lot of things to it, but it’s all good. I’m so thankful for all of the support.” 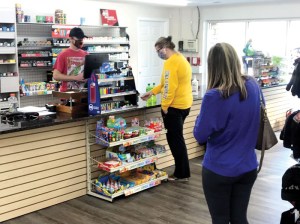 Jonathan Jarvis waits on customers in the new-look Stop and Save Mart in Clemmons. Photo by Jim Buice, for the Clemmons Courier.

Jonathan Jarvis was on the staff with Slater during the days of the old store, and when preparations were being made for opening the new place, he heard a common question from the public.

“We had customers coming by and checking up on us, and everybody wanted to know how David was doing,” Jarvis said. “Originally, he didn’t plan on coming back, but when he saw the outpouring of support, that kind of really gave him that boost of confidence to come back and show that he’s strong and definitely not let the bad guys win in this situation.”

Slater, who is single, said his sister proclaimed that he’s now the face of the store.

“That’s what she told me,” he said with a chuckle. “She said, ‘you’re the mascot.’ I said, ‘that’s a pet.’ I’m just a guy who proved that you can’t come in and mess with the little guys down here.”

The two men — David Curtis Smith of Yadkinville and Cody Lee Long of Alabama — were arrested a couple of weeks after the incident, facing numerous charges. Smith was sentenced in June to more than 26 years in prison.

Singh’s plan was to build back the store, but it took longer than expected, and that got extended by the arrival of the coronavirus pandemic earlier this year.

Of course, there is gas — it’s now Valero instead of Citgo — and all the typical items found in a convenience store. In addition, there’s a food truck on location daily.

“It’s definitely a facelift here, but we’re wanting to be the same mom and pop, friendly country store and seeing a lot of old familiar customers,” Jarvis said.

Erin Kennedy is one of those who lives close by that was “super happy” to have her “neighborhood” store open again.

“It looks awesome,” she said. “It was a pretty old store. It sure was a long time before it reopened, but I’m loving that it’s back.”

The opening of the new store, which is located in a convenient, rural setting but not far from the main strip in Clemmons and bordering Lewisville, has been well received, according to Jarvis.

“Pretty much nothing has changed here, even though it’s a new store,” Jarvis said. “Everyone was disturbed with what happened, but thankfully we’re back up and running. People have been in a two-year habit of going somewhere else, but now they come back here.”

“I’m still here today and blessed to be back,” he said.