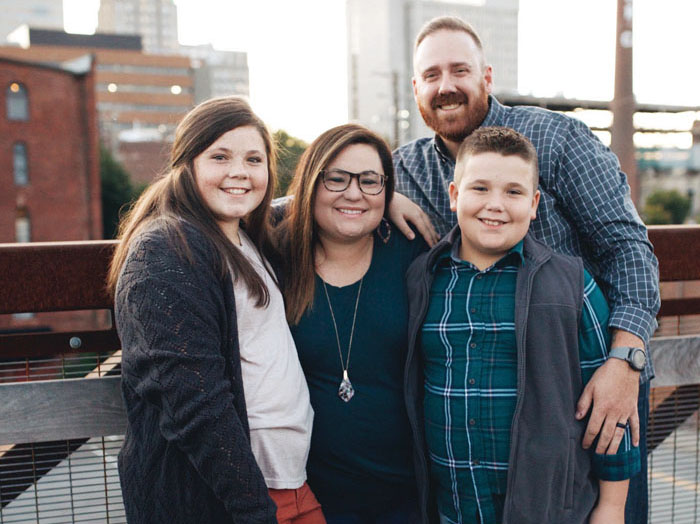 Charlotte Holder grew up in Arcadia, N.C., as an only child. “From an early age, I developed a deep appreciation for faith, family, and hard work,” says Holder. She attended Winston-Salem First Assembly of God Church and their school starting when she was 3.

It would be at Winston-Salem First Assembly that she would cultivate a love for playing sports, especially volleyball. “I appreciated the team aspect of it and working together towards a common goal,” explains Holder. She also valued the faith aspect the school afforded her. An active member of the youth group program, she met her future husband, Ben, in it at just 16 years old. “When it came time to go to college, I left for a year to go to Wingate University and I missed him and my family terribly. I came back home after a year and immediately started working,” explains Holder.

Holder’s move back home was one she felt confident in. She immediately began work at the Gap and became the youngest assistant manager they had ever had at 20 years old. During that time, Ben proposed to her, and they were married when she was 21 and he was 23 years old. “We knew we wanted to be together when we first met each other. We were excited to start our lives together,” reflects Holder.

Ben and Charlotte would have their first child, a daughter named Raylen just a few years later in 2007 and Cason, their son in 2009. “When Raylen was first born, I had begun a job at the United States Department of Veteran Affairs that my father-in-law had recommended I consider. I have family members that have served in the military, so helping other veterans has been near and dear to my heart. I’ve enjoyed working for them since that time and have had some really great opportunities to be promoted internally. Currently, I help determine veteran’s disability rating and how much money they will be able to receive. I respect the service that they have provided to our country tremendously,” notes Holder.

Outside of work, Charlotte and Ben spent most of their time doing activities with their children at their church or involving sports or extracurricular activities. “When we moved to Clemmons in 2015 for Ben’s job, we found instantly what a great community it has,” reflects Holder.

Around that same time, Ben and Charlotte had discovered a real passion and interest in building furniture. “I had given Ben some ideas of things I wanted done in the farmhouse style for our new home, and he thought he could do it. Then we put it online once we finished the projects, and people started asking if they could order a piece so we figured why not.” What started out as a hobby became Ben’s full-time job, and Charlotte’s part-time position just two years later. “In 2017, Ben was no longer working at his job, and was focusing full time on their new business venture, Knot Works Furniture, Inc., where they custom design pieces of furniture. Ben builds them and Charlotte stains and adds the finishing touches to them. “We are mostly custom orders which keeps us very busy. However, recently we have been approached by several stores to showcase our pieces in them,” says Holder. “It’s really neat to build something together. We take pride in working very hard to make something of quality and uniqueness.”

The Holders felt that their business endeavors were working out just as they were supposed to when another serendipitous moment occurred in their personal lives. “We were at our church one Sunday when a group of orphaned children from Africa came to sing. They blew my husband, children, and me away. Although, they were not there to promote adoption, we all left with the same take away message. We wanted to look into adopting. We began researching that option and taking classes and after four months were registered to be considered to do so locally,” explains Holder. The Holder family said yes to every child that they were asked to consider. “It didn’t always work out though for different reasons. We knew when it was supposed to work out, that it would,” says Holder.

The Holder family after six months of preparation and waiting were asked to help two young boys whose father had been incarcerated and their mother had signed away her rights to parent the children ages 2½ and 4½. “Instantly I felt a connection to them,” reflects Holder. “Whenever anyone asks how many children I have it’s automatic that I have four to include my children from birth and these boys.” The Holder family embraced them as their own for nine months. “We would have loved to have adopted them. However, their grandmother came forward and chose to gain custody of them, which is always the family’s right. We had two hours to pack up all of their things and bring them to her. It was heart-wrenching. You feel such a range of emotions. We feel fortunate that their grandmother still allows us visits and to be in their lives. The boys still call me mom and Ben they call dad. The family understands and doesn’t want to take away that connection from them.”

The Holder family knew that they would open their hearts and homes to the foster children that came in their home. However, they didn’t know how long the healing and emotional process of letting go would take them. “We weren’t sure if we could do it again. We thought about it quite some time since this past June. We wanted to help more, but we felt such emotion with having to let go and having zero rights to make a decision with the children on their behalf. So we’ve decided we will do respite work for other foster families. We will babysit and care for children when the foster families have to leave town and need a break. We feel this will give an opportunity also to see what age group would be best for our family dynamics. Babies are tough with our children that are older and very involved with their various activities,” explains Holder. “But we believe God has a plan for us. We just will be ready for what that looks like.”

The Holders have never shied away from the bigger picture of life — family, faith and hard work. Whether they are building a sturdy piece of furniture or their children’s future, they are dedicated to making it as beautiful as possible.