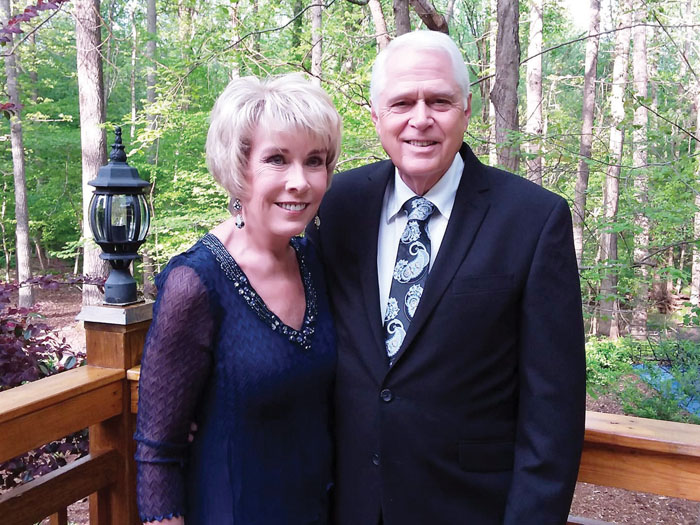 Al Burchett and his wife, Bonnie

Al Burchett is one of those people that doesn’t just understand hard work, he defines it. Growing up in Tennessee as one of six siblings, he had his first job when he was in the fourth grade. “I would get up and start delivering milk before school at 3:30 a.m. with my dad and then after a few hours head to school. When I got home from school I’d start my next job shining shoes at a barber’s shop. I had long days,” remembers Burchett. “I had many jobs as a kid including mowing yards and working at a gas station. I was a chronic do-it-your-selfer,” laughs Burchett.

Burchett chose East Tennessee State University in Johnson City to obtain a degree in electronics technology. His future wife, Debbie, whom he had met in high school, also attended East Tennessee State University with him. They were married after college, and headed to the Piedmont area as newlyweds. “During that time, the Vietnam War was going on, and a company called Western Electric (which has since changed names) came on campus and hired me. They recruited over 100 students on our campus and relocated them to the Piedmont area,” explains Burchett on his move in 1968 to North Carolina.

Seven years after Burchett’s move to North Carolina he received his master’s degree in engineering from Purdue University. “It was a five-week program that I took over the summer in Charlotte provided by the company. They paid for the expenses and I saw it as a good opportunity to focus on manufacturing systems. Although, I never worked in a manufacturing plant a day in my life,” jokes Burchett. Instead Burchett spent most of his career as a technical writer and manager. “Towards the end of my career I got into sales. It had less of the headache of management and because it was performance based I was able to double my salary in just 18 months.”

Not too long after receiving his graduate’s degree, Burchett added a new job title as dad to his resumé. Son, Heath, was born in 1976 and Sean was born in 1979. “I’ve been very blessed to have two amazing kids,” reflects Burchett. Family has always been very important to Burchett. When Debbie, his wife of 31 years passed from breast cancer on New Year’s Eve in 2000, it was very difficult for them. “We raised funds for Cancer Services in Winston-Salem through 12 golf tournaments in her memory. They help provide equipment and treatment support services to families dealing with cancer,” says Burchett. “I served on their board for awhile too.”

The Burchetts found giving back to the community was important and meaningful to them. When Al’s oldest son, Heath, went on a mission trip to Belize he was inspired to do more for another community of people. “Heath had gone to discuss spirituality and religion to groups of youth,” explains Burchett. “He found homelessness everywhere. He regrouped a bit and started making peanut butter and jelly sandwiches for the homeless in their community. The locals started seeing what he was doing and they picked it up and wanted to do more. Heath came back and did do more where he lived in Charlotte and created the Watchman of the Streets program. There are over 3,000 homeless people in Charlotte. We started delivering supplies like tarps, tents, sleeping bags and perishable food to them.”

Burchett wanted to further expand the program to the Piedmont area. Burchett was able to share in this passion with Bonnie, a woman he was introduced to by a friend and married in 2002. “Bonnie and I go out about 2-3 times a week. We take supplies to someone who just got out of a shelter, jail, rehab or a situation that left them needing some extra help. We get additional calls on top of those regularly scheduled outings. It just depends on the week,” explains Burchett. “We have a storage unit in Clemmons where we keep some of our supplies. Clemmons Methodist Church has been very helpful with this project. They actually started the Clemmons Food Pantry as a Sunday School project so feeding and caring for the community has always been near and dear to our church’s hearts.”

Burchett says providing tarps, sleeping bags, and tents are the primary focus when making his trips out into the community. “We always bring perishable food that can be opened without a can opener and doesn’t need to be heated. We received a grant from the Winston-Salem Foundation this year, which we desperately needed during COVID-19. Our homeless population tripled during the pandemic, so the needs were even greater than before. Financial contributions are always preferred and appreciated so we can make sure that we have exactly what we need to serve our clients,” says Burchett. “We cover most of Forsyth County. We travel with about 3-6 volunteers at a time on these runs. In our group we have about 19 volunteers in addition to myself and Bonnie.”

Burchett spends the bulk of his retirement serving the homeless community. He and Bonnie have appreciated the support of their church, Clemmons Methodist with supplying donations. “I’ve been involved with Clemmons Methodist Church for a very long time. It’s incredible how the members of the church give back in so many ways,” reflects Burchett.

Burchett encourages anyone interested in helping serve the homeless community to contact him. “We would love to have more volunteers and grow funding sources to serve those in need,” he explains. If you are interested in learning more please visit https://watchmenofthestreets.com to see how you can make a difference.

In the meantime, Burchett will continue spending his weeks helping others and inspiring his community to make a difference where they can.

Stop and Save Mart gets new start in reopening