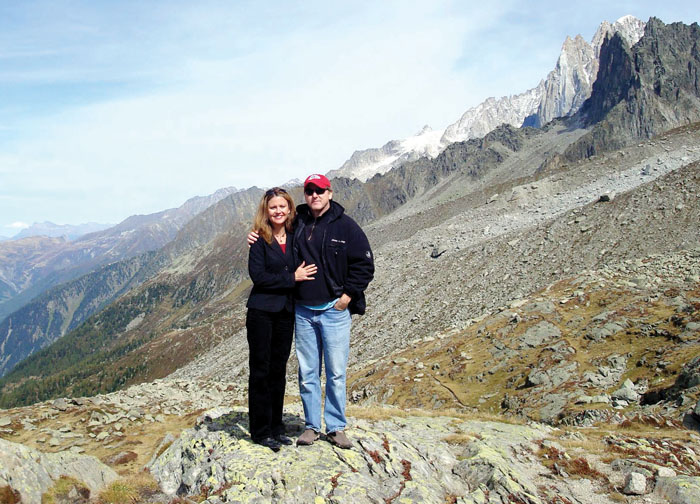 Daniel Gapastione and his wife, Kirsten, on Mont Blanc in France, taken while visiting a good friend in Lyon.

Daniel Gapastione was born in Los Angeles and spent most of his earlier years in southern California. As the older of two children, he enjoyed playing sports like many kids his age. Gapastione took advantage of the ocean and surfed with friends, and also ran track in high school. “I also learned early in life that I enjoyed art. I didn’t think of it as something I could do professionally though,” explains Gapastione.

Gapastione did consider going pre-med when he chose to attend Long Beach State University on a track scholarship. “I learned quickly that I didn’t want to become a doctor and decided to pursue history,” notes Gapastione. “I enjoyed running track during college, until I was sidelined after three years due to a series of hamstring problems.”

As graduation approached, Gapastione weighed his options with his bachelor of arts degree in history. “I knew that I was limited in career choices so I decided to go to graduate school to get my master’s in history. It was a bit of a delaying tactic while I figured out what I wanted to do. I also began teaching freshman history at Long Beach State as part of the mater’s program,” explains Gapastione.

While Gapastione wasn’t completely certain what his next professional move would be, he had zero hesitation on who he was going to marry. “I had met my future wife, Kirsten, at a party,” says Gapastione. Surrounded by many suitors, Gapastione realized he had to rise above the competition. “I chided her when I first met her, and I think she wasn’t used to that. She was absolutely beautiful so I knew I had to do something different,” said the smitten Gapastione. “It worked and we have been together ever since that night. We’ve been together for 33 years.”

With Gapastione’s personal life in order, fate would work in other interesting ways professionally. “My nextdoor neighbor and I would go surfing together. I had designed a few surf boards and he was looking at my drawings,” says Gapastione. Unbeknownst to Gapastione, his friend had shared the drawings with his brother, an art director for Walt Disney Studios. “He offered me a job as a contract artist at Buena Vista Film Distribution Company which was the entertainment arm for Walt Disney,” notes Gapastione. “I worked as a staff artist for Disney for five years. I enjoyed working in the entertainment industry for places like ABC and CBS too.”

Although, Gapastione enjoyed using his artistic talents professionally, he wanted to secure a career where he could make more money. “I decided to make a niche in computer and cyber engineering. I saw a big demand growing in this area of the Industry. And in the 1980s there wasn’t much in the computer science area for schooling — just applied mathematics. I decided to go back to school to supplement my education at San Diego State University,” says Gapastione. “While I was there my wife and I decided we were tired of living in southern California. It was becoming overcrowded and the cost of living was quite expensive. Because her job had her traveling frequently, we decided if she found somewhere she liked, she would bring back real estate pamphlets, and we would explore it more. One of those places happened to be Winston-Salem, North Carolina.”

Kirsten and Dan decided to pack their house and move to North Carolina. “I was finishing up my additional math electives at Wake Forest University,” mentions Gapastione. He didn’t have to wait long for job offers to roll in. He immediately began working not long after they moved to North Carolina. “There was such a demand for security as companies desired to use the internet and connect to each other for expanding their business. I started off helping Integon (now GMAC Insurance) get on the net and begin doing internet-based commerce,” explains Gapastione. He worked with various consulting companies. Gapastione aided businesses with fulfilling requirements to have secure networks and applications.

Gapastione’s work extended from companies like Aon and Volvo to even the state of North Carolina. “I helped build the first security integrated network system for our state. The design took about six months to plan alone,” says Gapastione. His most recent work has kept him at the Bank of America as the vice president of cyber security and network services senior architect. Having been with the company for almost 10 years, Gapastione says, “We have 250,000 employees so it’s always challenging to stay ahead for securing the firm.” Gapastione during his time at Bank of America has patented two systems designed to provide protection and encryption for networks.

Gapastione has found that his downtime hobby is often parallel to the skillsets he applies to his work. “When creating art I have a certain set of requirements needed to execute a painting. I hope, as I get closer to my retirement to go back to having art more as a profession too and create pieces that are enjoyed and affordable to people. People don’t really buy art like they used to. I have stayed active in my studio at home, and plan to do it even more of it once I retire,” says Gapastione.

When Gapastione is not working or painting, he and Kirsten enjoy traveling. “Before COVID-19 we tried to go to at least two places and trips a year,” mentions Gapastione. However, due to COVID-19, the Gapastiones are spending more time at home with their two rescue dogs, Figgy and Sidney. “We’ve always had rescue dogs and usually two at a time. It’s so rewarding to see the progress they make when you help them work through their issues from whatever they experienced before joining your family. They aren’t just pets to us, they are family members.”

Whether, it’s providing a secure and safe computer network, painting an art piece, or making a difference in an animal’s life, our neighbor reminds us that anything worth doing comes from hard work and persistence.