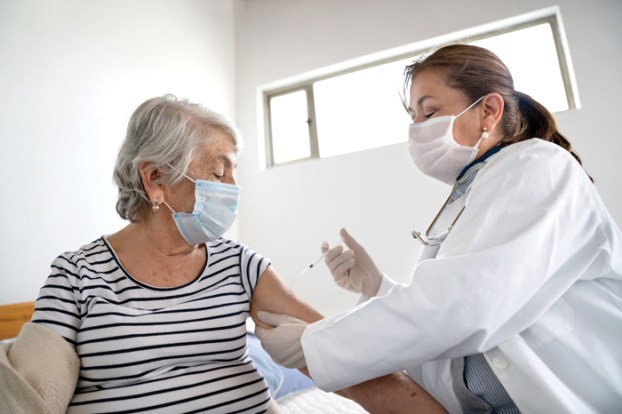 As we get closer to a COVID vaccine, arm yourself with the facts

With flu season returning and scientists striving to deliver a vaccine for COVID-19, the anti-vaccine movement is hitting its own feverish pitch.

Their latest conspiracy theory is totally unfounded. It claims that retired Microsoft founder and CEO Bill Gates is plotting to insert a chip into COVID-19 vaccines so he can track people’s movements via 5G cellular networks.

This appears to be a conflation of several conspiracy theories rooted in suspicion of both wealthy elites and cellular technology, including one that alleges 5G towers are somehow spreading COVID-19.

While it’s true Gates has invested a substantial portion of his fortune funding vaccine programs, he’s done so as a philanthropist through the non-profit Bill & Melinda Gates Foundation, which recently pledged $1.6 billion to deliver vaccines to the world poorest countries. Viruses, meanwhile, can’t travel on radio waves.

Perhaps more frightening is that so many people say they believe this absurd conspiracy theory.

Anti-vaccine myths, which have been around since before the smallpox vaccine was even invented in the late 18th century, tend to gain currency the more health experts and governments push for broad participation in vaccination programs.

Two of the United Kingdom’s most prominent anti-vaccine organizations were launched in the last half of the 19th century in response to new laws requiring children be inoculated against small pox, according to Dr. Vincent Iannelli, a pediatrician, blogger and author who has written extensively about the topic.

Then as now, the anti-vaccine movement is often led by promoters of alternative medicine who claim vaccines don’t work, make you sick and contain poisonous chemicals that can cause cancer or birth defect. Other adherents simply seem to perceive mandatory vaccinations as an unjustified violation of their personal liberty.

Then as now, embracing their arguments requires ignoring the preponderance of peer-reviewed research and scientific organizations that say the benefits of routine vaccination greatly outweigh the risks.

“The truth about vaccines could not be more clear: They are safe, effective and do more to protect us from a host of deadly diseases than any other tool we have at hand,” said Dr. David Priest, Novant Health senior vice president and chief safety and quality officer.

Below are some of today’s more popular anti-vaccine myths and the facts they ignore.

No, a vaccine cannot cause the illness it’s supposed to protect you from.

While some vaccines contain live viruses or bacteria, they have been weakened, or “attenuated,” in a laboratory so that they trigger an immune response without causing illness. The vaccines do not give you the disease they are protecting you from.

Most side effects from attenuated vaccines are usually minor and short-lived. For example, a person may feel soreness in the spot where they were inoculated, or experience a mild fever.

“We all need to understand that the risk of being harmed by a vaccine is infinitely smaller than the risk of a serious illness or death, from infectious diseases,” Priest said. “Vaccination is a vital step to get children off to a healthy start.”

No, vaccines do not contain toxic levels of mercury, aluminum, formaldehyde and other chemicals.

While some vaccines use these and other chemicals to enhance their effectiveness, they are used at levels below what is found naturally in the body or environment. For example, the average newborn has 50 to 70 times more naturally produced formaldehyde in their body than what is found in a single dose of the vaccine used to prevent diphtheria and tetanus.

Another example is thimerosal, a chemical used to prevent contamination in multidose vials of vaccines. Thimerosal uses ethyl mercury, rather than methyl mercury, which is the form that causes mercury poisoning. Because it is used in such small amounts and is processed differently by the body, ethyl mercury is also less likely to build up in the body.

Vaccines are evaluated for their potential to cause cancer, birth defects or sterility.

The statement that they are not evaluated is based on a misinterpretation of the language in Section 13/Nonclinical Toxicology that appears on documentation manufacturers insert into vaccine packages. For many routine vaccines, including MMR (measles, mumps and rubella), Section 13 states that the vaccine “has not been evaluated for carcinogenic or mutagenic potential or impairment of fertility.”

This merely means that there was no need for further testing because toxicology studies conducted at the preclinical phase showed no signs of adverse effects from the vaccine or its individual components.

All necessary testing is done on vaccines and their components, Priest said.

No, the measles vaccine does not cause autism.

This myth was triggered by a study involving just 12 children that was retracted in 2010 after the British medical journal that published it in 1998 said it had been deceived by the study’s lead author. In 2004, 10 of the study’s 13 co-authors disavowed the study’s findings and the primary author ultimately lost his medical license.

The facts are that vaccinated children develop autism at the same rate as unvaccinated children. Properly designed studies involving more than 1.2 million children have established no links between vaccines and autism or autism spectrum disorder.

No, viral vaccines are not made from aborted fetuses.

The culture used to grow viruses used in vaccines for German measles, chickenpox and hepatitis A is derived from fetal cells recovered during two elective abortions performed in the 1960s.

Because these descendent cells never, themselves, formed a part of the fetus’s body, the National Catholic Bioethics Center has advised Catholics that they could use such vaccines if they deem the benefits to personal and public health outweigh the risks of not using them.

These are just some of the myths being circulated by anti-vaccine campaigns today.

If you still have concerns about the benefits and risk of vaccines, including the potential consequences of not vaccinating against diseases, talk to your physician. If you or your child has a compromised immune system or allergies — particularly to eggs or latex — inform your healthcare provider before getting the vaccine.

Science shows that these conditions — and not any hidden agendas — pose the greatest risks of being vaccinated.

By Mandy Haggerson For the Clemmons Courier Shannon Conrad developed his affinity for Lewisville and the surrounding area from a... read more