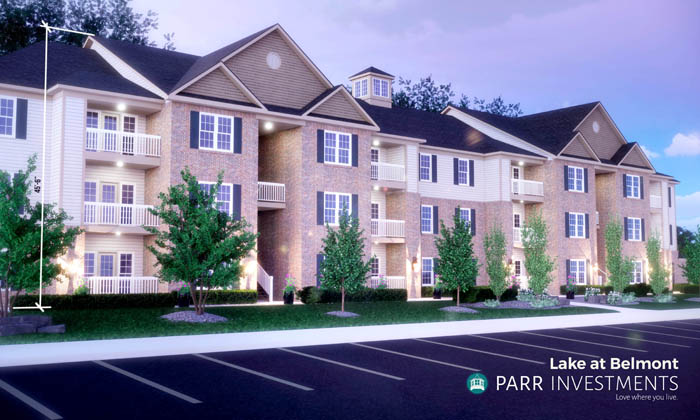 The Lake at Belmont. Image courtesy of Village of Clemmons.

Developer Chris Parr’s The Lake at Belmont project cleared the final hurdle for a 360-unit, multi-family development on Lewisville-Clemmons Road when the Clemmons Village Council approved voluntary annexation along with the zoning and site plan adoption in Monday night’s meeting.

The favorable vote came after a public hearing for Zoning Map Amendment — Zoning Docket C-237 — of Hendrix Commercial and Industrial Enterprise Inc. from RS-40 to RM-18-S (Residential Multifamily — Special) for the property described by the Forsyth Tax Offices as PIN number 5884-81-0709.

The breakdown of apartments for the development shows 140 one-bedroom units, 184 two-bedroom units and 36 three-bedroom units on the old horse farm — a 38.48-acre tract at 1930 Lewisville-Clemmons Road just north of I-40.

This will be the second major project for Parr Investments in Clemmons.

“This is a project I’ve worked on for 10 to 12 months,” Parr said. “I have a property up the road — Clemmons Town Center Apartments — and thought this would be a good use of the property with the topography, the lake, the wetlands and everything else. I thought it would make sense to bring it into the Village of Clemmons.

“I’ve been in the village for seven years with my other property behind KFC and love it here. I hope to do it in two phases and give it time for the property to absorb in the area. Hopefully, we can start it this summer.”

No one spoke during the public hearing, but planner Nasser Rahimzadeh provided more details on the project. When asked how many individual homes could be placed on the same property, he stated that roughly figuring 9,000 square-feet per lot for RS-9, and not taking into account streets, that the number would be about 186 lots.

Comparing traffic — in terms of average daily trips — for that kind of development would be a trip generation of 1,756 compared to 1,960 for 360 apartments, but he added that the difference in unit numbers — from 186 to 360 — is nearly double.

While considering the merits of The Lake at Belmont, councilwoman Mary Cameron could only find positives on her checklist:

• A sidewalk will be built on Lewisville-Clemmons Road.

• The project will be annexed into Clemmons, which means the village will have control over the project.

• It complies with the Village’s Legacy, Comprehensive Plan and Transportation Plan.

• The buildings are 15 feet under the maximum height they could been have built.

• The impervious service coverage is only 27% — in large part to the rear part of the project being in a floodplain that will remain vacant, helping with stormwater issues.

• Parking will be to the inside of the site.

• There will be a full-fledged fire suppression system in the buildings.

• The developer agreed to eliminate porches on the second and third floors of the buildings that face Lewisville-Clemmons Road and replace them with sunrooms.

“I see a lot of good here,” Cameron said. “All the village has to do is collect taxes and enjoy the new product that’s been built there. I see no cons and I see an awful lot of pros here.”

Actually, there was one con that Cameron originally mentioned — 18 more spaces than were required, stating her displeasure for more concrete creating more stormwater problems.

Parr said he would agree to eliminate those extra spaces and talked more about the back of the property, “which is basically unusable. It’s going to stay undeveloped. It’s going to be beautiful back there, and the acreage next to me, a lot of his property is also wetlands. So for years and years to come, it’s probably going to be deer and everything running back there.”

In addition, Parr discussed “working hard hopefully with what I’m doing here and being a catalyst to get the sewer brought in from the lift station to Harper Road.”

Councilman Mike Rogers added, “Mr. Parr will have the lift station in the site plan, however he will pursue with City-County Utilities and the village to orchestrate a gravity-feed line to the new lift station on Harper Road and abandon his plan for a lift station if everything works out between the parties.”

Village Manager Scott Buffkin concurred, saying, “I’d like to reiterate that I have spoken to Ms. Driver at City-County Utilities, and they are willing to partner with us to facilitate that happening.”

While working on his development, Parr has been heavily involved in the realignment of the proposed Styers Ferry Connector from Lewisville-Clemmons Road.

“It actually dissected the middle of this property, which obviously wasn’t going to work for the development,” he said. “I always want to have the ability to know this road could be built one day. If we left the road where it was right now, it would not receive the score to be built because I would have a $50 million apartment complex there. I spent a lot of time realigning that road and preserve that in the future to put easements along my proposed property so they would be able to have that built. That road may not be built, but it could be.”

Rogers said that Parr “has done a lot of work not only for today but for the future on this project. He looked far ahead for what was proposed for our transportation infrastructure.”

In other highlights from Monday night’s meeting, the council:

• Heard from Buffkin regarding record crowds for this year’s Tanglewood Festival of Lights. ”This year has been excessively busy, and if you haven’t heard from some of your neighbors about some traffic issues, I would say that I’m surprised,” he said. “Last Saturday night, we set an all-time high.” Sgt. Brian Gieger confirmed that 2,550 vehicles viewed the lights on Dec. 12.

• Approved a budget amendment to reallocate funds for additional street resurfacing in the spring.

• Heard a presentation from Dale Graver of VC3 Inc. regarding a VOIP Telephone Solutions proposal and asked the staff to also look at local providers for this service along with pricing.

• Designated Cameron as the council’s voting delegate for the N.C. League of Municipalities.

• Discussed the most recent executive order, including the possibility of meeting virtually with the continuing pandemic.

• Heard from Mayor John Wait, who recognized the 100th anniversary of Clemmons Mill.

Blotter for the week of Dec. 9

Obituaries for the week of Dec. 9