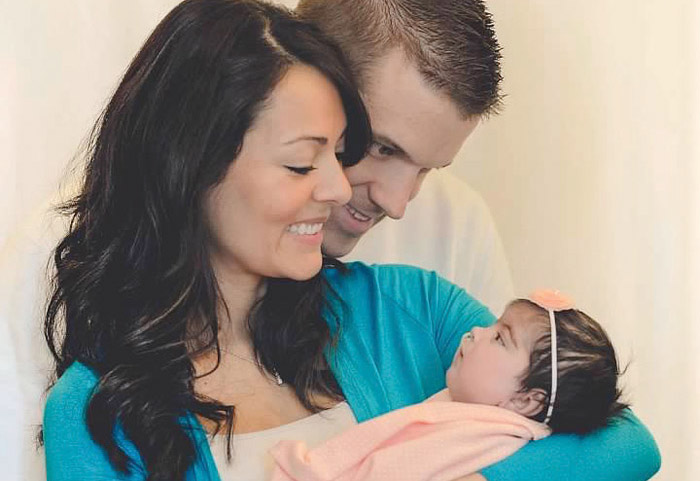 Lisa Bocan’s earliest childhood memories commence in an orphanage in Bogota, Colombia. Bocan was five when she was adopted with her older sister. “I couldn’t say for certain if she was my biological sister, but according to the paperwork she was,” explains Bocan. “However, we always assumed that we were.”

Raised by her adoptive parents in New Hope, Minnesota, Bocan enjoyed the closeness of her family. “We did karate together as a family and I really enjoyed having that activity together,” says the brown belt Bocan. She enjoyed other extra curricular activities — joining the track team, cheerleading, piano, singing and theater.

Like many high school seniors, when it came time to select a college, Bocan wanted to spread her wings and try a school that was far from home. Bocan headed to the University of Kansas in 2000. It was during that time that Bocan, who was raised in the Jewish faith, began to really reflect on her relationship with God. She began attending church with various friends.

Halfway through her sophomore year, Bocan dropped out and headed back to Minnesota. She began working at Best Buy and really contemplated her next steps. “I had accepted Jesus Christ as my savior and knew I wanted to go to a school that embodied that,” says Bocan. “Northwestern College, which is now a university, was the first one to pop up during my research.” Bocan headed to St. Paul Minnesota to earn a bachelor’s degree in communication and a minor in Bible. “My choice in major was influenced by my love for writing. I also had hoped it would give me more options in professional choices,” explains Bocan.

Bocan’s future was also impacted during her time at Northwestern in her personal life. Meeting her future husband, Matt, happened through mutual friends. “I met Matt my senior year. We dated for eight months and then were engaged for 11 months. The rest is history with us. We talked about marriage really early on when we were dating. I just knew,” reflects Bocan.

In the Bocans’ first few years of marriage, they moved often for Matt’s work. “Matt had told me that travel was likely with his work from the get go so I was prepared to switch gears often. Luckily, I found jobs that I truly enjoyed in the church that allowed me to help with events and the planning that goes with it. I also served as a youth director in a big church. Everywhere we traveled the environment was very supportive. I appreciated in my positions getting to utilize my love for building relationships too,” says Bocan.

Bocan started honing her photography skills. “I was inspired to start Lisa May Photography. I was surrounded by an amazing group of women who encouraged me as well. I love capturing important moments in peoples’ lives,” explains Bocan.

The Bocans knew that with their professional adventures they also wanted to embark on their personal one to expand their family. “We suffered two miscarriages before our daughter, Brenna, was born in April 2012,” says Bocan. “When I miscarried after Brenna, I was essentially flagged for further investigation. I learned that my body has a hard time processing folic acid which is important with fetal development,” explains Bocan. After recommendations from her doctor, Bocan began an anti-inflammatory diet to cut out gluten and dairy to allow her body to detox.

“We found out that we were pregnant again after the miscarriage in 2014. We were overjoyed. At 18 weeks and 5 days we had an ultrasound. We were hoping to find out the gender of the baby. Everything was going perfectly. Matt and Brenna had even left because they thought everything was healthy with the baby. Then, the ultrasound technician kept going back to the heart. I didn’t think much about it. She told me that she would have to get the doctor because she thought there was something wrong with the baby’s heart. If you could physically hear your heart shatter, I did. I laid there in silence and darkness by myself. I got up and saw my reflection and said to myself, “thy will be done” as if the Lord was preparing me,” says Bocan.

The Bocans were delivered the news that their new baby girl, soon to be born and named Mila was diagnosed with Hypoplastic Left Heart Syndrome. In short, Mila was going to be born with half of a heart and require multiple open-heart surgeries to survive. Her life expectancy could not be predicted, however, the prognosis was grim. “I went through a grieving period. I grieved having a healthy child. I spent hours upon hours researching the potential surgeries that heart babies have. I reached out to every single medical friend I had. At this juncture in life, I was so grateful for my faith,” says Bocan.

Bocan’s faith and research led her to Boston Children’s Hospital for Mila’s birth. “The level of care and support I gained from speaking to the doctor that would be caring for us was incredible. He responded so quickly and spoke to me for two hours. I felt confident and momentum as we came up with a plan. My community at home gave us a baby shower and prayed over us, prayed for Mila, and offered incredible support,” reflects Bocan. “I knew that this was the beginning of having zero control of the situation. However, I knew that this was Mila’s story, and I was grateful to be a part of it.”

Bocan began a blog to track Mila’s story. “It was therapeutic. It ended up being a vessel that helped us in many ways like helping us find housing when we headed up to Boston. We had an army of people rally behind us to pray for us. I truly believe it is what held us together,” says Bocan. Their network of support were grateful to see that Mila, who’s name means “miracle,” arrived at 38 weeks. “She came out pink. I was able to hold her for 10 whole minutes before they had to take her,” says Bocan. Matt walked with Mila when they took her away to check her heart and perform the necessary examination to determine next steps for Mila. “It was mentioned to us how much they admired our pep and zeal for enjoying the moments we had with her given that there was so much uncertainty,” explains Bocan.

For the next 4½ months, the Bocans got to know and love their daughter, Mila. The 5 pound and 3 ounce baby girl looked very much like her big sister. “Her brown eyes sparkled as she took in the world around her,” says Bocan. “It wasn’t until her appointment on Oct. 22, 2016, that we were blindsided. Because she had initially done so well, Matt and Brenna were able to go home. However, her CT scan that day indicated that she was not going to be with us much longer. They both rushed to Boston the very next morning not knowing if they would be able to say goodbye in person. They were able to fortunately. Brenna for her young age was such a trouper, having to forgo naps and just be there with her sister. The outpour and support we felt from the Boston Children’s Hospital, friends and family is a true testament to God providing you what you need. It was a devastating time. However, we were there as a family honoring her life.”

The Bocans also didn’t give up hope on expanding their family. They welcomed son, Nolan, three years ago. “I love my children so much. I don’t take for granted any moments with them. That is one of the reasons I decided to home school Brenna,” says Bocan. “We now have the perspective of life, and how fleeting it is.”

The Bocans would be reminded of that perspective when they would become pregnant with their son, Aiden. “Everything was great at our eight-week check up. At 12 weeks, they saw that Aiden had Trisomy 13 and that the prognosis was grim. I was frustrated because it seemed so unfair. I felt that we were being tested again. I didn’t understand why,” shares Bocan. At Aiden’s appointment at 14 weeks and six days, Bocan got some concerning news.  “We were unable to find his heartbeat at that point. However, when Aiden was born at 15 weeks and two days he came out looking perfect, just so very small. It gave me a new perspective that life begins immediately. We have always believed that,” says Bocan. “Every life has a purpose. Every life is a gift. Even if they are taken too soon. Their life in many ways has immeasurable value. The perspective we have gained from letting our children go has taught us that there is always a silver lining.”

Our neighbor has been comforted by words that remind her that she is not alone in her lifelong journey. “Fear not, for I am with you; be not for I am your God; I will strengthen you, I will help you, I will hold you with my righteous right hand,” Isaiah 41:10.