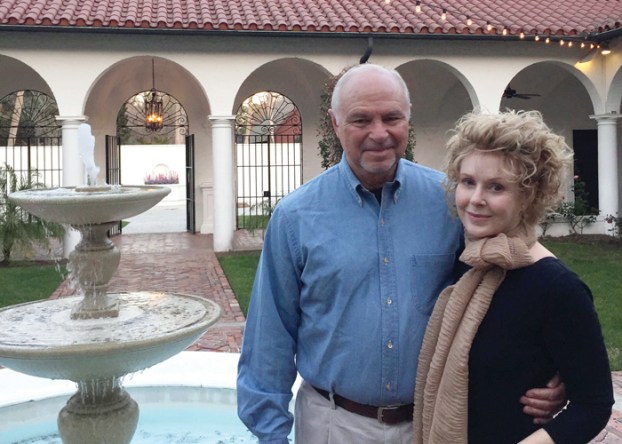 Debra Allman and her husband, Eddie.

Debra Allman grew up in Summerfield, a farming community right outside of Greensboro. Allman’s family purchased the farm with over several hundred acres in the 1890s. Growing up on a multi-generational farm was meaningful and offered many valuable life lessons. “My brother and I helped with the many duties of farm life. We shared responsibility of the calves and steer. I was primarily in charge of the hunting dogs who I adored.”

Allman didn’t mind the all-consuming aspect of helping with the animals. “We were always late going to school. One time I remember when we had to go to the principal’s office to explain why we were tardy the secretary looked up at us and just asked if it was horses, cows or pigs? Ironically, my first thought was that the pigs weren’t actually ours, but our neighbors’, but found it comical that they knew what had held us up,” says Allman. “It was during this time as a child though, that I became a lifelong advocate for animals and their welfare.”

Allman stayed close to the farm and her family, as she grew older. “I left high school after my junior year and did an interdisciplinary program at Guilford College,” explains Allman. She ultimately honed in on her skills for numbers and received an undergraduate degree at North Carolina A&T University in accounting. Allman utilized her degree as a CPA.

“As I continued down my career path, I became interested in the human and well being connection with finances. I decided to go back to school and get a master’s and PhD in human development and family studies. I was fascinated with the human aspect of financial decision making, the inconsistencies, the lack of connecting the dots, the way people struggle with making financial decisions both good and bad ones,” explains Allman. “It’s interesting because there is more and more research now about that, however, it’s still in its infancy from what I found.”

Allman enjoyed applying what she studied and learned to her professional life. “Now I primarily manage a small number of closely held entities, most of which are related to my family,” notes Allman.

Allman also found a partner in life that shares her love for finances and animals. “I was married in 2007 to Eddie, although it’s ironic because when we met we knew immediately we wanted to be together but just never planned to get married,” laughs Allman. “Eddie is now nearing retirement, and we have recently begun fostering a dog from a local shelter. I’m pretty certain that we will fail at finding another home for it,” jokes Allman. “From the very beginning of my time on the farm as a child I can’t recall not being concerned with animal welfare. Fostering and helping with rescues is very meaningful to me.”

Allman reminds us that some of the best life lessons of childhood can remain well on into our adulthood. “For me making a difference is important,” says Allman. As Mahatma Ghandi appropriately said, “the greatness of a nation and its moral progress can be judged by the way its animals are treated.”

By Mandy Haggerson For the Clemmons Courier Jennifer Reader grew up in Winston-Salem. From an early age, Reader appreciated and... read more