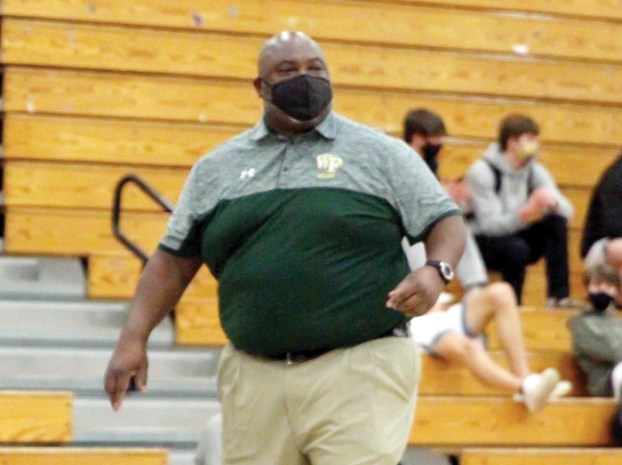 Coach Johnny Hill is taking over as coach of the West Forsyth girls basketball team as Coach Brittany Cox Hudson is on maternity leave.

Taking the reins: JV coach at the helm of West girls basketball team as Cox Hudson goes on maternity leave

If one thing is true, change is inevitable in life. Quite possibly, the most natural thing in the world has transformed the highly successful West Forsyth girls basketball program this season.

No, it’s not COVID-19 that has affected high school sports since last March. It’s that Coach Brittany Cox Hudson, who has coached West Forsyth since the 2015-16 season and helped lead the Titans to the NCHSAA Class 4-A state championship during the 2018-19 season, has taken maternity leave to focus on the impending birth of her first child.

“Brittany, Coach Hudson is out on maternity (leave),” Athletics Director Mike Pennington of West Forsyth said. “I think she’s due any time.”

Reached for comment, Cox Hudson said she just wanted the focus of this story to be on the team this season.

Losing a coach for the season is difficult, especially one with the success Cox Hudson has had. No problem for West Forsyth. In steps the very capable hands of Johnny Hill to coach the Titans this season. Hill has been at West Forsyth for the past five years.

“I was thinking all along that she was going to continue to coach,” Hill said. “It was just business as usual for us. And probably right around Thanksgiving we started talking, and basically we knew it was going to be January before we would start playing. With that being as close to her due date as it was going to be it just didn’t make sense for her to continue coaching.”

Hill was the JV girls basketball coach at West Forsyth last season, and was originally slated to be the JV coach this season.

“(Cox Hudson) just decided that once it was time, it was time,” Pennington said. “And it was a hard decision for her because she loves coaching and she loves these girls. And that made it even more difficult for her to step away because other than her family, coaching and those kids are a very high priority for her.”

Hill also had to step away for workouts through most of December because his daughter Caitlin, who graduated from West Forsyth in 2016 after playing both girls soccer and softball, tested positive for COVID-19. Because of contact-tracing, Hill had to quarantine for two weeks even though he didn’t test positive. Hill’s eldest son, Darius, graduated from West Forsyth in 2019, and his youngest son, Jake, is a senior on the boys basketball and football teams. And his wife Charla is a math teacher at West Forsyth.

Once Hill came back after Christmas and practice entered its final week before the regular season started on Jan. 4, Cox Hudson, who was there for some of the workouts and practices in late November and most of December, decided it would be best to take maternity leave this season.

“Once I was away for the time that I was — basically for the month of December — she and I talked about it a couple times,” Hill said. “She was like, ‘There’s a possibility,’ and I was like, ‘Look, you’re about to raise a family. If you feel like you need to step away, because of for whatever reason, that’s what you do.’

“I’m no stranger to coaching. I feel comfortable doing it. I think the most nervous I got was the week before our first game, which, to be honest with you, that was the first week I was back. And that was the week that she stepped away.”

It’s been a relatively seamless transition for Hill since he stepped in as head coach for the Titans.

“That was really the only transition for me, was moving from JV head coach to varsity head coach,” Hill said. “The biggest difference for me is the speed of the game. Being able to switch from one mindset to another in short a period of time was, it was different, but at the same time it’s kind of exciting. I like it.”

Pennington said it was an easy decision for himself and Principal Charles McAninch to name Hill the interim coach for this season.

“Brittany was fine with that,” Pennington said. “You want to make sure she was comfortable with everything because Brittany, she’s just done such a great job, so hard-working. We wanted to make sure that when and if she did step away that she’s not worrying about the team.

“That’s the great thing about Johnny. She’s not had to (worry about the team). They were very close. Johnny’s an excellent coach in his own right. He’s really one of the most experienced coaches on our entire staff. And so that just made it a very easy transition.”

On the court, the talent at West Forsyth isn’t quite to what it was two seasons ago when it won the state championship, but the Titans have a great foundation with seniors Shakira Baskerville and Alana Gary. Baskerville has already signed to play at High Point next season, alongside former West Forsyth players Skyler Curran and Callie Scheier.

“I expected us to play at a high level,” said Hill, who has no assistant coach. “I wasn’t real sure if some of the younger girls would step up like they have. When I say younger girls I mean girls like (junior) Bri Schilitto, (sophomore) Abby Hunter, and most definitely (junior) Caroline Johnson. I think the three of them have played pretty tremendously up to this point.”

However, the Titans did lose dynamic point guard Maddie Scheier, Callie’s sister, after she moved with her family to New Jersey after her father Adam took an an assistant football coaching position at Rutgers last summer.

“When you’ve got somebody that can score like Shakira from anywhere on the floor, that’s always helpful,” Hill said. “And then you’ve got a girls like Alana, who, she’s not going to put up a whole of points because she’s very unselfish with the ball most of the time. But she rebounds, she plays defense. She does all the intangible things that you look for.”

The season, which is compacted, began with a 54-49 nonconference loss against Jamestown Ragsdale. Since then, West Forsyth pummeled Parkland 78-47 in its final nonconference game, and is 5-1 overall and 4-0 in the Central Piedmont 4-A, including last Tuesday’s 46-36 win at home against East Forsyth, which many thought was the preseason favorite to win the conference. It capped off the week with a 53-39 win Friday night at rival Reagan.

Basketball is something Pennington knows well. He was an assistant coach at Carver, and was the head coach at Parkland for 10 years, where he helped the Mustangs win the NCHSAA Class 3-A state championship in 1999 and was also the runner-up in 2002. He left Parkland and became the head coach at West Forsyth after David Laton left, and Pennington was the head boys coach for the Titans for seven seasons before being named athletics director after T.R. Richards retired.

“I look at the schedule, I see who’s coming up,” Hill said. “I get the girls ready for them and that’s who we get ready to go play.”