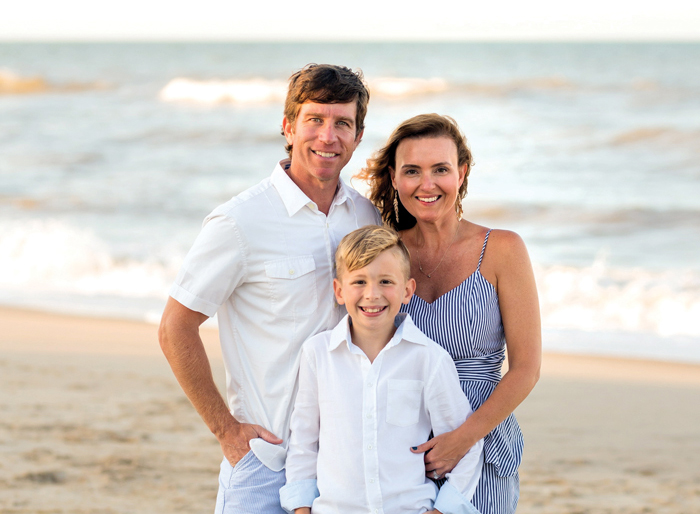 Stacie McClellan, with her husband, Kris, and son, Liam.

Stacie McClellan grew up in both Tennessee and Virginia because she lived in Bristol, a town split by two states. McClellan was the middle child of three. She was always encouraged to pursue her passions. McClellan became very interested in dance from a young age. “I recall watching the ‘Nutcracker’ and being mesmerized with ballet,” mentions McClellan, who immediately began her love and commitment to the art. “I danced all the way until college. At that point, I decided to buckle down and focus more on my schooling,” she said.

McClellan had chosen to attend the University of Tennessee in Knoxville. “I loved the campus when I went there. You could feel the camaraderie. I knew it was the right place for me,” explains McClellan, who originally began studying nursing. “My mom was diagnosed with colon cancer going into my junior year of college. I was by her side helping her with her care. At that point, I realized that I wanted to help people in our situation with how their health care was being delivered. I switched my degree focus to healthcare administration with a concentration in management and a minor in marketing.”

McClellan had another influential situation occur during her time in college. She reconnected with her future husband, Kris, whom she had known since their childhood. “He was the first boy I ever kissed,” laughs McClellan. “We had the good fortune of being best friends when growing up. And even to this day our families live close to each other in our hometown which is nice.”

Kris and Stacie were married after they graduated college in 2003. “Kris found a job first in Winston-Salem at Pfizer so we decided to move to North Carolina. Knowing that area was a good health care town, I knew it wouldn’t be too long before I found the right fit,” says McClellan. “Ironically I received an email about a position available as a physician liaison at Wake Forest Baptist Health. I answered it and had about 13 interviews with various department chairs. I was hired, and once I came on they didn’t know for certain what to do with me. However, they split the duties between one other person and myself, who is now my boss, to become advocates for the physician’s at Brenner Children’s Hospital. We started a new program called the Provider Relations Program. We essentially break down issues and barriers with carriers and patients. It’s a position that didn’t exist when I first began, and between the two of us, my boss and I now cover about 26 counties in the state and 14,000 miles. It’s very rewarding because we are passionate about what we do.”

McClellan has been advocating for the programs at Brenner Children’s Hospital for almost 12½ years. Now serving as the director of provider relations, she knows that each day is different, but always one that has a positive impact on its patients. “As a parent myself, having had my son Liam in 2010, it’s especially meaningful to me,” notes McClellan. She learned from her role as mom the importance of patience. “Liam is all boy. There is not one sport that he doesn’t enjoy playing,” laughs McClellan. “He’s truly taught me about what unconditional love is.”

McClellan feels strongly that part of being a good parent involves teaching her son to give back to the community that she feels has given them so much. “I’ve been in this area now for 18 years. I live in Bermuda Run surrounded by a group of women that share my values about giving back and including our kids on how to do that,” explains McClellan. She is very active in a group called Bermuda Run Cares. “It was a group that was originally started by women in our area that wanted to support our community. We have expanded our areas of focus. In fact, most recently with our work with delivering Thanksgiving meals to families through Storehouse for Jesus, we helped families that pre-COVID-19 probably never needed any assistance before. They were humbled and grateful that people in their community cared enough to help then when times were tough,” says McClellan.

“What I also love about Bermuda Run Cares is that the kids want to be a part of it. They don’t do it because they have to. It gives them and others a way to help our community that they might not have known existed. Seeing these families at Thanksgiving it taught our children that these people were impacted and didn’t have a choice. It also showed them that you shouldn’t judge a book by its cover and that you need to be kind. Anyone can need help at any given moment,” says McClellan.

McClellan is hopeful that COVID-19 won’t impact their future fundraising events this summer so they can continue to help the community. “We are always looking to have more people join our group and help give back. We try and keep everyone informed through our Bermuda Run Cares Instagram and Facebook pages so they can look forward to events we hope to have in the fall, like our golf tournament,” notes McClellan. “We are always energized and uplifted by families that jump in to help improve families’ lives when they need help most.” The children of the families that have volunteered at Bermuda Run Cares would likely agree with Anne Frank’s sentiments, “No one has ever become poor by giving.”

Blotter for the week of Aug. 11