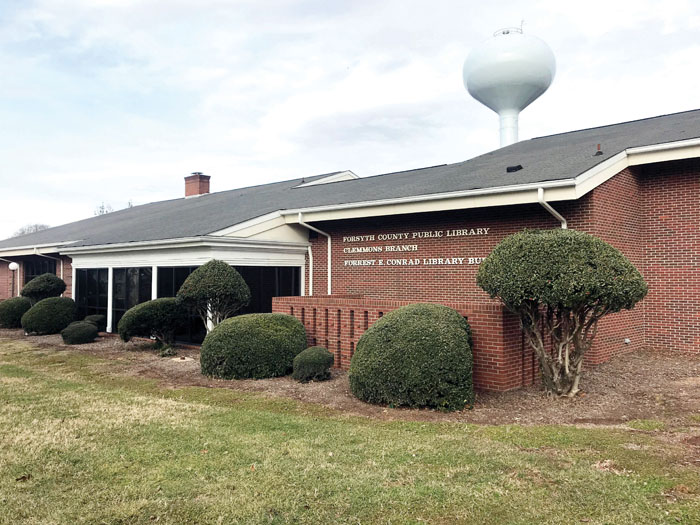 The Clemmons Branch of the Forsyth County Public Library system opened in 1984 but will soon make way for a much larger and updated facility off of Stadium Drive. Photo by Jim Buice, for the Clemmons Courier.

With a shiny, new bigger and better Clemmons Branch Library on the verge of opening, what will become of the current facility on U.S. 158?

Deputy County Manager Damon Sanders-Pratt said that no decisions have been made but what could happen is the county could declare a surplus and make it available for sale.

“The board hasn’t spent a lot of time collectively determining how they want to move forward with that facility,” Sanders-Pratt said. “The next thing that we will do as a staff is likely present an item to surplus that facility since we’ll be leaving it and then the board could either choose to do that or move in another direction.” 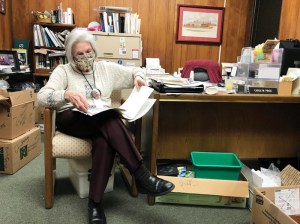 Branch manager Carolyn Price goes through some materials in her office. Price and her staff are preparing for the move to the new library with a projected opening of late March. Photo by Jim Buice, for the Clemmons Courier.

If the property went on the market and was sold, Sanders-Pratt said that in prior years the board has discussed using the proceeds to replace borrowing for other construction.

“That’s what staff has heard to this point, but the board can do something different in the event that the facility does sell and there are proceeds to be dealt with,” he said.

Mayor John Wait said that he didn’t have any specific comments regarding the future of the current library but has heard talk about that space being turned into a community center or similar use.

“What I would say is if the county would be willing to give us that property, we would make good use of it,” Wait said. “So I hope that if they do decide to dispose of that property, they would keep us in mind.”

Sanders-Pratt said, “I haven’t heard the board of commissioners talk about that. I have heard people in the community there discuss other uses for that building ranging from a museum to the historical society to a community center. A number of people talk about what to do with it, but the board has not.”

Meanwhile, the new library, which will come in with a final price tag around $6.3 million (with everything included), is currently on schedule to open in late March.

“That’s the timetable for now,” Sanders-Pratt said with a chuckle, knowing weather could change things. “Construction would end prior to March if things go according to schedule and then the building will be turned over to the county. And then that period before the end of March is when everything would move from the old facility to the new so we could open by the end of March.

“That month will be a period of time when we will be moving the old stuff in and the new stuff also coming in. We will be turning on the technology and testing the technology to make sure it is ready for the general public and the staff getting accustomed to the logistics of the facility and where things are located because it will be new to them, too. The community and the library staff will learn it together a little.”

There will be lot more room (more than 20,000 square feet compared to 8,900 for the current facility, which was built and opened in 1984) along with all the new technology and flexibility with the space.

“The community in Clemmons has grown a lot since that facility was built,” Sanders-Pratt said. “Its usefulness for a community of that size has been challenged.” 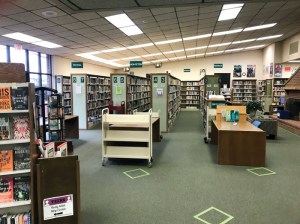 The current Clemmons Branch Library has 8,500 square feet of space. Photo by Jim Buice, for the Clemmons Courier.

Carolyn Price, the longtime librarian at the current Clemmons library, said she is thrilled with all the new facility will provide.

Price didn’t hesitate in saying that the increase in space would be the biggest difference along with the technology. Keep in mind that the current library building — with the groundbreaking in March 1983 and the official opening in August 1984 — wasn’t even wired for computers.

For now, however, there’s lot of work ahead in preparing for the move to the new library off of Stadium Drive.

“We’ve been trying to go through our current collection and doing drastic weeding out because we want everything to look as good as possible,” Price said. “It’s not something you can do quickly. We’re just now getting ready to get the budget for next year, and we’re not sure exactly what we need. We’ll have some new books, but again budgets have been affected by COVID. It’s hard to gauge how to compare this to that.”

As for a future use for the current library, Price said that “the two biggies” she has heard discussed are a senior center and a branch for Forsyth Tech.

“It will be up to the county what they want to do with it,” Price said.

Meanwhile she and her staff, which includes five full-time and four part-time employees, are looking forward to the new digs.

“The whole idea of having all this space is mind-boggling,” Price said. “We’ve been cramped for so long. Whatever we get there, we’ll be happy for sure. It’s an exciting time.”

Buice column: The early days of the Clemmons library