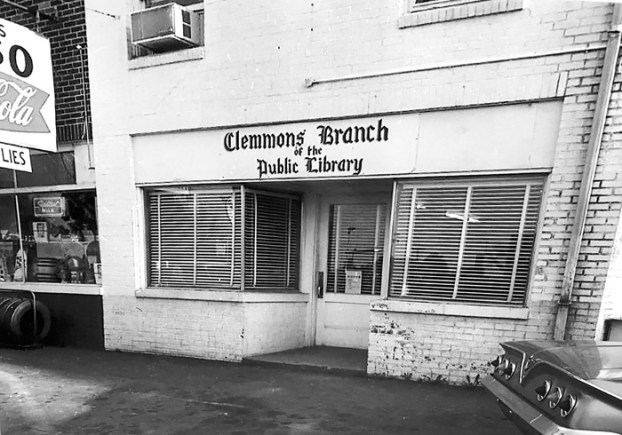 Buice column: The early days of the Clemmons library

When Mary Cameron moved to Clemmons in 1984, she recalls having a hard time locating the local library.

“I found out it was in where the florist shop is next to the Courier office,” said Cameron, a longtime member of the Clemmons Village Council who holds positions with both the county library board and the Friends of the Clemmons Library group.

She was obviously expecting much more. 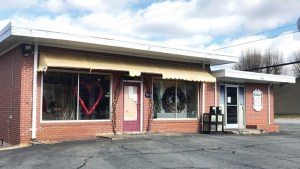 Photo by Jim Buice
Before moving to its current location, the Clemmons Branch Library was located just down the road on U.S. 158 in a building beside what was a pharmacy at the time and is now a florist shop to the left of the Courier office.

Cameron recalls the first and only time she went inside. “I went in there one time and the floor squeaked and it scared me, so I said there’s got to be another library somewhere. The closest library was in the (Thruway) shopping center on Stratford Road down underneath. I went to that library several times before the new library opened.”

That was in August 1984 when the first full-service library branch opened just up the street on land donated by Edgar Broyhill. Having a new building with 8,900 square feet and the many amenities available at that time was a big deal.

It served Clemmons well for quite some time, but as the village has exploded with population growth, a new facility was in demand. So after years of waiting, a new library with more than 20,000 square feet and all the new technology is only a couple of months away from opening.

But back to the past…

Actually, that small space beside the newspaper office wasn’t the first library in Clemmons.

According to information on the Forsyth County website, county library service began in 1964 with a sub-branch in a former Northwestern Bank building on U.S. 158.

Carolyn Price, the librarian at the current library, has an old photo of what was described on an accompanying envelope as “the first location of the Clemmons Branch of the Forsyth County Library on the S.W. corner of Clemmons Road and Middlebrook Drive in the old Casstevens Building.”

If you’re a certain age, that site is remembered first for the Casstevens Clinic where babies were born and tonsils were removed.

“The original building that was there was the Dr. Casstevens Clinic because a lot of us were born there,” said Ann Sheek, who was a longtime reporter at the Courier.

The clinic eventually moved to Winston-Salem on Stratford Road in the late 1940s, but the Casstevens Building had a number of different uses over the years — gas station, women’s clothing store, other retail shops, apartments and the bank.

“The Clemmons Jaycees and Jaycettes put that together,” Sheek said. “They got it started.”

The library was there several years in that building, which was later torn down when Piedmont Federal Savings & Loan took over that location and built a new branch.

David Hauser, who also previously worked for the Courier and has been actively involved in the Clemmons Historical Society, said that the first place he lived in Clemmons was in an apartment in that old Casstevens Building. He remembers when the library moved down the road, replacing a pharmacy, in the building next to Courier on U.S. 158.

“I was at the Courier when the library was next door,” Hauser said. “It was there until they went into the Edgar Broyhill building.”

Now it’s moving again, but it certainly hasn’t been without challenges along the way. It is noteworthy that discussions in the 1970s for a new branch library in Clemmons came after a recommendation in 1973, according to a story in the Courier, that the City-County Planning Board recommended closing the Clemmons and Lewisville rural branches, because as the board termed them, they were ”ineffective.”

It’s also interesting to look back and see a story written in late 1984 after the opening of the current library by Jim Govern, who was then the head of the Clemmons Branch Library.

“The old branch building had only 1,500 square feet of space and had been severely overcrowded for some time,” he wrote. “Several factors contributed to the decision to build the new branch — space limitations of the old building, the population growth of Clemmons and the likelihood of continued growth in the area.”

Govern concluded his piece with this statement: “If you wish to increase the profile of the library in your area — build a new one!”

And it’s happening again… after all these years.

Rep. Harry Warren just doesn’t get it. When he personally resumed Republican legislators’ crusade against local newspapers and the public’s... read more