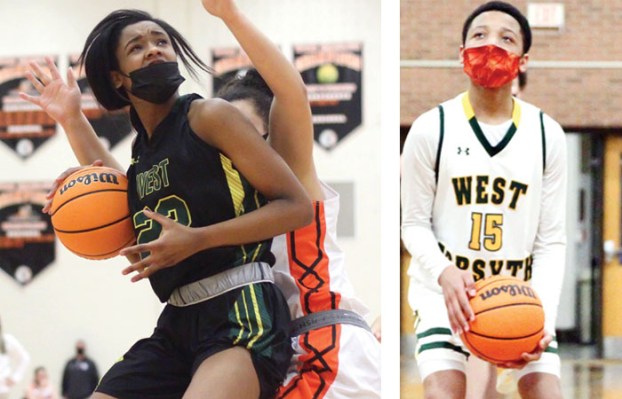 The ties that bind are sometimes and interesting proposition for siblings, much less for a teenage brother and sister.

That’s not the case for two West Forsyth basketball players — superstar senior Shakira Baskerville on the girls team and her sophomore brother, AJ, who is starring on the boys team.

They both look up to each other and they’re both each other’s best fans in a family of four children, which has three girls, including eldest sister Shakema and youngest sister Jeanna.

“Shakira, she’s easy-going. She has a really nice personality,” said their mother Sharonda Moore. “She gets along well with others, including her siblings. She doesn’t really argue. She’s not the jealous type.

“She helps AJ along, carries him along, takes him to practice, gets him a ride home if he doesn’t have a way. She encourages him. She’s not like, ‘I don’t want you to do better than me or shine.’ Shakira has a really good personality, so luckily they’ve always looked out for each other.”

Despite being the only boy and the second youngest of the children, AJ has stepped up in many ways.

Shakira, who has already signed to play at High Point University next season, always gets to play her games first on a given night because the girls games start before the boys games.

“Me and my brother, we would play-fight all the time, which I think has made me tougher,” Shakira said. “Still even now, any time I go anywhere he likes to ride with me.”

Although AJ might not say it directly to his big sister, there is some hero worship for Shakira.

“We just click together. We don’t argue much,” he said. “We get along.”

While AJ is preparing himself to play on a given night, he is also watching the girls game to see how Shakira is playing.

Asked why would like to see all of her game instead of preparing in the locker room before his games, he said learns the game through Shakira. However, after her games are over, she sits and watches her brother play.

“I feel like we learn different things from each other,” AJ said. “She might have a certain move she learned from me. And if I see her play, we just learn from each other.”

Both shined this past Friday night, with scoring 18 points in losses to cross-county and conference-rival East Forsyth in Kernersville. Through last Friday’s games at East Forsyth, the West Forsyth girls are 6-2 overall and and 5-1 in the Central Piedmont 4-A, and the boys are 2-6 overall and 1-5 in the conference.

However, even though Shakira is the star of the girls team, and AJ is one of, if not the best player on the boys team, both have come a long way in the last four or five years.

Shakira didn’t play basketball until seventh grade, and AJ was on the freshman team at West Forsyth as early as the beginning of last season.

“She was in seventh grade, I took her outside and told her to throw me the ball and the ball went backwards,” Moore said.

This came as a shock to Moore because she played in college from 1996-2000 at Winston-Salem State, but she said she never pushed her children to play basketball.

“I took her to an AAU tryout and I told the coach, I said, ‘Just give her a chance.’ I didn’t think she was going to make the team,” Moore said. “She was like, ‘Yeah, I’ll give her a chance.’ And she put her on the team. And she’s been going ever since.”

Shakira has vivid memories of the first time she played basketball with her mother.

The siblings quickly took a liking to basketball and bonded through learning the game.

“Me, my brother and my sister al used to play at Reynolds Park Rec, and I remember looking at the people in a game and shaking my head, like ‘Don’t pass it.’ ”

Working together as siblings has definitely made them better players.

“It’s really fun because we used to train with each other when we were younger,” Shakira said of AJ. “AJ always had the best defense on me. It would be so hard to score on him. I was always taller than him, so I would always post him. We would always go against each other. I think my brother is one of the toughest people I’ve played against.”

That’s not quite the case anymore. AJ has hit a growth spurt and is now listed at 6-foot-1, and Shakira is listed at 6 feet.

“Neighborhood basketball, she would play against boys most of her life,” AJ said. “Like with me, with my friends outside. That’s probably how she got better.”

Shakira came to the Titans as a freshman and played with a team loaded with talent, including then senior Skyler Curran and then-junior Callie Scheier, both of whom are playing at High Point University now. And she as coached by Brittany Cox Hudson, who is on maternity leave this season, and Johnny Hill is the interim coach this season. Shakira played a fair amount as a freshman, showing off some of the raw talent she had, but she slowly got better her sophomore season when the Titans won the NCHSAA Class 4-A state championship, defeating Southeast Raleigh at famed Reynolds Coliseum in Raleigh.

“It was really fun because everyone was expecting our team to win states my freshman year because we were stacked,” Shakira said, “Sophomore year, it was really fun because the team was together. Because some teams have a lot of tension between them. Teams that we’ve played, they argued on the court and stuff, but we’ve never had that issue, which I think plays a big part in it.”

Who was there through the whole state championship run? That’s right, her little brother AJ. He got a chance to see what it was like to be a student and an athlete at West Forsyth while still being in middle school at Meadowlark.

“It was way better because she was kind of known there because she was pretty good at basketball,” AJ said. “People knew her, so they knew me. They would say, ‘Oh, that’s your brother. I was comfortable.”

Also there that day in Raleigh was Moore and many friends and family.

“I was nervous up until the end,” Moore said. ”I sweated to the end. I don’t know why I’m like that.”

Moore also noticed a lot of green and gold sitting in the stands.

“What I was so excited about, as well, was the people from West that showed up,” she said. “It was unreal. We had almost the whole entire gym. The support was awesome.”

Flash forward to the past two seasons and Shakira went from a raw player, to a talented leader.

“I’m just taking it all in,” she said. “I’ve noticed my teammates look for me a lot when they don’t have anything to do. Just like learning to come to the ball more when they need help and things like that.”

No matter what the girls or boys varsity teams do for the remainder of this season at West Forsyth the dynamic of Shakira and AJ Baskerville will sway some next season. Shakira will be a freshman at High Point playing with her former teammates, Curran and Scheier, and AJ will be a seasoned junior on the boys varsity for the Titans.

“I’ll probably see a lot of her games,” AJ said. I don’t know if she can come to a lot of mine because maybe she’ll have film or something like that. Who knows?”

Going from being a senior in high school to being a freshman in college can be tough on anybody.

“I’m a little nervous because I have to start from being the baby all over again,” Shakira said. “But I’m super-excited. I’m so excited about High Point.”

As a devoted mother and a fan of basketball, Moore doesn’t know how she’s going to be able to see Shakira and AJ play next season if they play on the same night.

“It’s not too far for me,” Moore said. “I can get to her quick. She can come home quite often.”

Moore thinks she has an early plan.

“I might have to leave at halftime, come back,” she said. “I’ve done crazy things, coming from here and there.”

Taking the reins: JV coach at the helm of West girls basketball team as Cox Hudson goes on maternity leave

By Jay Spivey For the Clemmons Courier If one thing is true, change is inevitable in life. Quite possibly, the... read more