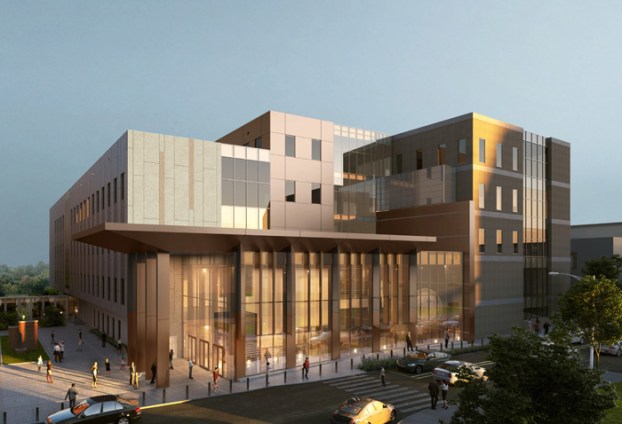 CJMW Architecture image An artist’s rendering of what the new Forsyth County Hall of Justice will look like.

Construction has begun on the new Forsyth County Courthouse

Ground has officially been broken on the new Forsyth County Hall of Justice that is being built on Chestnut Street beside the Forsyth County Government Center.

To avoid large gatherings during the COVID-19 pandemic, the groundbreaking ceremony was conducted virtually with prerecorded remarks that went live recently and can be viewed on the county’s website and Facebook page. Construction is anticipated to take up to two and a half years.

“This project is one that’s been in the works for quite some time and I am thrilled that it is underway,” said County Commissioner Chair Dave Plyler. “…It will become a symbol of the county’s promising future.”

The new courthouse will be approximately 250,000 square feet, with six floors, 18 courtrooms, two escalators and four public elevators. It will have a secure tunnel that will allow for inmate transfers from the county jail without using a vehicle. There will be a physical connection to the Government Center that allows for shared services and will allow for future expansion of court services into the center. Most functions of the Clerk of Court’s office will be located in a dedicated area on the first floor, so visitors can access those services without having to take an elevator or visit multiple areas of the building.

Samet Corporation and Balfour-Beatty are the construction managers of the project and CJMW Architecture is the architect.

Forsyth County has had four courthouses since its founding. Forsyth County’s first courthouse opened in 1849, and was designed by Francis Fries, the first chairman of the Forsyth County commissioners. It was replaced with a new courthouse in 1897. A new courthouse was built once again in 1926, which has now been converted into downtown condos. The current Hall of Justice on North Main Street opened in 1974 and is 175,000 square feet with 14 courtrooms.