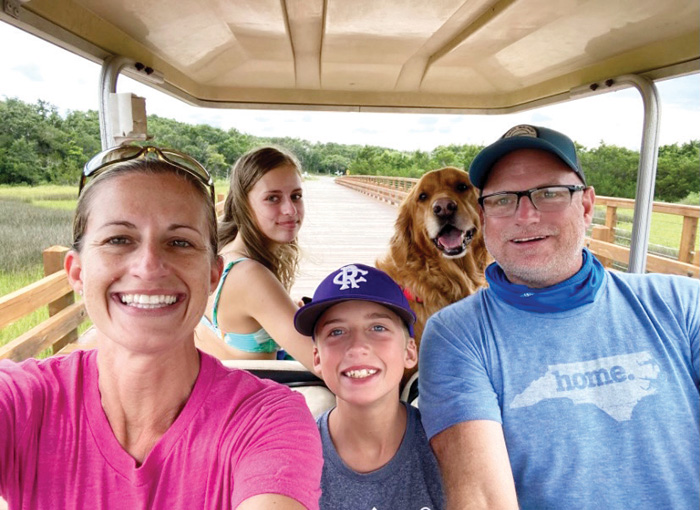 Brad Bovender with his wife, Margaret, daughter, Hannah, and son, Colby, with their dog Bella on their annual trip to Bald Head Island.

Brad Bovender has had a love and appreciation for the Clemmons community ever since he was a young child. The younger of two boys in his family, Bovender spent his early years at the baseball field, playing basketball at the old Clemmons gym — “the Cougar Dome,” and football too. While a student at West Forsyth High School, Bovender continued to play those sports that taught him valuable life lessons.

When Bovender graduated from West Forsyth he headed to the University of North Carolina at Chapel Hill. “Initially when I went off to college, I had considered being a military fighter pilot. I realized pretty quickly that was not my calling though. I also learned after my first year at Chapel Hill that I wanted to be at a smaller school environment and headed to Appalachian State University,” mentions Bovender. “I decided to study physical education. My dad had been a coach at Carver High School for 25 years, and I thought I would enjoy that profession as well.” 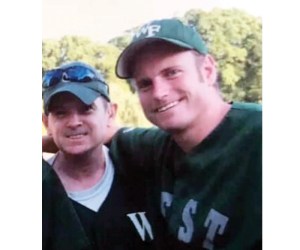 During Bovender’s time toward the end of college, he would fatefully run into his future wife and also former West Forsyth alumna, Margaret. “I had gone to visit a friend in Charlotte, and we bumped into each other on her birthday,” remembers Bovender. “I asked her for her email address,” laughs Bovender. “And I emailed her to hang out and then we started dating.”

When Bovender graduated from college he knew that he wanted to end up working in the community where he was raised. “I am a homebody. I had looked at going to Charlotte too because that was where Margaret was doing her residency. Ultimately, we were able to go back to Clemmons. I got a job at East Forsyth High School and stayed there for two years. When the principal left and headed to West, I was lucky to go with him in 2003,” says Bovender. “I can’t believe how long I have been there.”

When Bovender returned to his former high school, there were still several teachers at West that had also taught him. “At first, it’s strange being an adult with your former teachers,” laughs Bovender. “I had so many great ones there when I was a student. It was neat to be back with them as a peer.” Bovender initially was teaching health and coaching both the baseball and football teams. “My role at West has evolved to teaching physical education, coaching football in the winter, and driving athletic teams as needed in the spring. I also help with the field painting for soccer and baseball. Once my children were born, Hannah (2006) and Colby (2009), my schedule allowed me to spend more time with them, and once they got older, watch their activities too. They are very active kids, and we are always on the go,” says Bovender. “Both my parents and Margaret’s have always been very active in Hannah and Colby’s lives. We’ve been very fortunate for what they have done for them and helping us manage our professional careers. Being a parent has taught me patience. Love comes in many forms. Sometimes you have to be hard. Sometimes you have to take it easy.”

Bovender’s kids are old enough to enjoy watching their dad in action as a coach and teacher. “With each state championship won at West Forsyth, no matter what sport, it was enjoyable to watch. The last state championship title was with the girl’s basketball team. Watching the players’ improvement made from their years together was what made it so special. As a coach and teacher, that’s what is most meaningful, the relationship with the kids. Every time you get a call after they’ve graduated and gone off into the world, and they let you know that you made an impact on them. The scoreboard doesn’t matter as much as the life lessons from it and how they turn out as adults,” relays Bovender.

Bovender and his family have had to slow down a bit on their activities like everyone else due to COVID-19. However, they’ve always enjoyed spending their free time going to events at West, “I love seeing my students in drama, the talent shows, all the different sporting events, and we try to see as many as possible,” says Bovender. “What I loved as a kid growing up in Clemmons is truly how much the saying of, ‘it takes a village,’ is carried out here within our community. At West, and all the local businesses around here, I’ve grown up a lot with these families and it’s great cultivating that sentiment.”

As our neighbor nears his almost 20 years back at West Forsyth, he reminds us that being part of a community and continuing to build it is so rewarding in many ways.