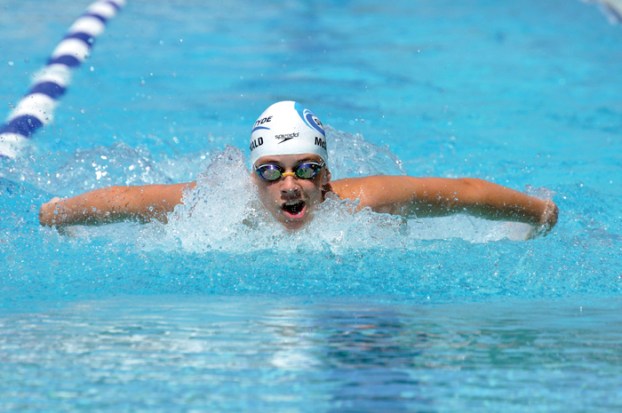 Athlete of the Month: Logan McDonald

When junior captain Logan McDonald stepped up to compete in the 200-yard individual medley in the swimming state championship meet recently, his final words before breaking the school record were, “I’m about to get your record, George. Watch this.”

Previous record holder George Vlahos and Logan McDonald have a unique relationship in that Vlahos is McDonald’s coach and a former West Forsyth swimmer himself. Vlahos set the record his sophomore year and then proceeded to break his own record his junior and senior (2015) years respectively.

McDonald says that he and Coach Vlahos have engaged in friendly banter throughout the season..

“(Vlahos) used to always make fun of me for it and tease me that he still had (the record), so it was my goal to get it before I was a senior, just to say that I was faster than him,” he said.

But don’t be fooled by the jokes. Vlahos is also one of McDonald’s biggest supporters.

“During meets he’s always jumping up and down and screaming super loud. He gets really hype,” McDonald said.

Since Vlahos is the coach for both West and year-round swimming for TYDE, the two spend a lot of time together. McDonald is grateful to have such an upbeat and energetic coach.

“George always cares about what he’s doing, and for every single workout, he explains how it helps us or what he wants us to focus on,” McDonald said.

Vlahos recognizes Logan’s capability and tries to push him every day.

“I’ve always challenged Logan, ever since I was hired at West and the Y. There aren’t a lot of swimmers who are six-foot-three with that kind of potential,” Vlahos said.

McDonald has always had a competitive nature and admits that though he’s been swimming since age 6 on his summer league team, it wasn’t until he was 9 or 10 that he started to win consistently and began to love it. Vlahos is glad that he stuck with it.

“He’s a racer. He will do anything and everything to win. You don’t see a lot of swimmers with the type of mentality that he brings to the table every day at practice and every time we race,” Vlahos said.

Vlahos says Logan does whatever the team needs to help them succeed; he is an unselfish athlete, willing to swim events that aren’t his favorite to help the team win.

“Logan is a team player. He never puts himself first. It’s always what’s best for the team.”

Not only did McDonald break the record in the 200 IM with a time of 1:53.83, but he swam backstroke in the men’s 200-yard medley relay — with senior Patrick McKenna and juniors Leighton Jones and Alex Valliere — that also broke the school record (1:35.77). He then placed sixth in the men’s individual 100-yard backstroke. McDonald was undefeated in all of his events during the regular season, including relays, and was an all-conference selection in all four of his events at the conference meet. At the regional meet McDonald was 0.1 second from breaking the school record in the 200 IM, making him realize that it was within his reach for the state meet.

McDonald devotes around nine hours every week to swimming and is looking to compete at the Division 1 level in college. There are some smaller schools that he could commit to now, but he would rather go to a bigger D1 school.

“Logan 100% has the potential to swim at the Division 1 level in the NCAA,” Vlahos said.

“He just needs to keep putting in the work and taking care of himself and eventually those types of things will pay off.”

With one more year of high school swimming left for McDonald, only time will tell if he will continue to follow in the footsteps of Coach Vlahos and break his own record during his senior year.

Dream vacation: Ski out West or surf in Hawaii

Janie Peterson is a junior first-year sportswriter for the West Forsyth student newspaper, the Zephyr. She runs track and cross country for West and is also part of the Mindfulness and Meditation Club. In her free time, she enjoys spending time with friends and family, listening to music, and playing the piano. She also works at Publix.
You Might Like

By Jay Spivey For the Clemmons Courier Things couldn’t have gone much better for the West Forsyth football team last... read more