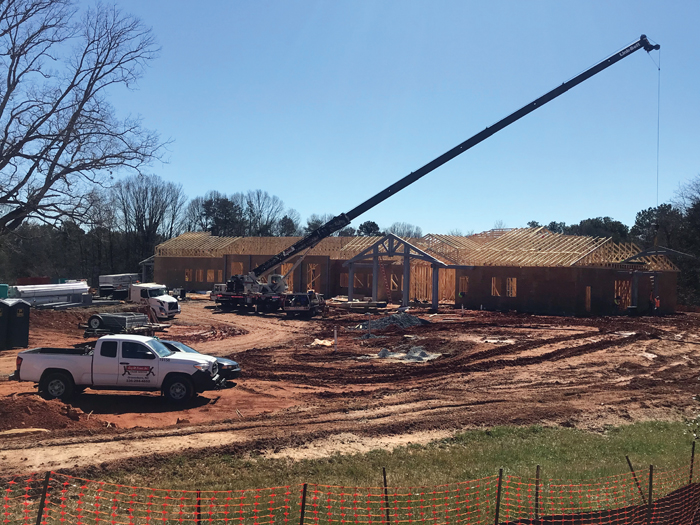 As the new Mary Alice Warren Community Center starts to take shape in Lewisville, Mayor Mike Horn said that the town is also taking inventory of its other facilities and additional issues in conjunction with its five-year Comprehensive Plan update.

“With the new building coming online in September or early October, we want to take a look at all of our facilities — the Annex, the Old Community Center, Town Hall and other storage facilities — that we have stuff in and what is it that we need to do,” Horn said. “One of the things we want to do is not just have an adequate but a functional area for our Community Policing deputies.”

The progress on the community center, which is being built on a 15-acre site next door to Jack Warren Park, continues with the framing going up along with putting on the roof trusses.

“You can really see the shape of the building now and the height,” Horn said of the 12,000-square-foot facility. “It’s pretty cool.”

Meanwhile, in February the town had what it called “a retreat,” Horn said, “but basically it’s an update for council and discussion on a variety of things that the staff needs direction on.”

Horn said that the talking points will feed into the start of the five-year Comprehensive Plan and Parks and Recreation Master Plan update this month.

“We’ll get the review process set up with lots of community engagement with residents to participate in over the next 12 months, and by April we will have a schedule for all the opportunities for residents to be able to be part of the discussions,” Horn said.

The “retreat” included Parks and Recreation items related to the community center property, including the possibility of a splash park and a dog park.

“We’ll have a better idea with the Comp Plan update and Parks and Rec plan update of all these things we want to try to do, where they should go, how much they will cost and that will put us in better position to file for PARTF grants,” Horn said.

Roads, sidewalks and building projects are always a focus of these kinds of sessions, and Horn said that work on the delayed Gateway Project — the road improvement from the U.S. 421 interchange on Williams Road continuing between that interchange and the roundabout at Shallowford and Williams roads, should start this month.

Funding for the project, which will consist of curb and gutter, median and landscaping, is through a 80-20 split with state transportation funds taking care of 80% and the town providing the other 20%.

In another development involving roads, Horn said that the proposed roundabout at Lewisville-Vienna and Robinhood roads scheduled to coincide with the opening of the new middle school in 2021 has been pushed back a year to 2022.

“Unfortunately, we wanted to be ahead of the curve, but I think we’re going to be behind the curve now,” Horn said. “This is one of the ones that you wonder a little bit when you start having discussions with the people who do the prioritization of projects. I’m not sure that they really realize the impact that the school is going to have on that intersection and the 280 homes that are going up in Conrad Farm.

“In the interim, I’m going to be trying to work with the state DOT to do something right now. It’s just a signalized four-way intersection now, and if that is the mechanism to control traffic out there, it will be a disaster. We have to figure out how to make traffic move through there better until we get the roundabout built.”

Stormwater is another issue the town knows it needs to address going forward.

“We are going to try to figure out long term what our stormwater costs are going to be,” Horn said. “It’s not going to go away. We’re going to continue to have some of our facilities fail. We don’t have the huge amounts of impervious pavement. Most of ours are neighborhood projects where we have town roads, and it’s generally culverts or sinkholes. Those aren’t cheap to repair, and we don’t have an endless budget to do that. We don’t have a stormwater fee, so we’re considering how to fund that on an ongoing basis.”

Leaf and limb pickup is another frequent topic, and while Horn said that many residents would like to have that service, the enthusiasm wanes when they are asked to pay about a cent and a half on the tax rate. For now, Horn said that the town will put together a list of contractors that do that kind of work and make it available to all residents.

Other items that were discussed and be targeted for more attention going forward included capital spending needs, planning and land use, four-year or staggered terms for the council and rewriting the town’s Unified Development Ordinance to make it more consistent and easier to use.