Sutton named Clemmons Rotary Student of the Month for February

Lillie Sutton was recognized on Feb. 17 as the Rotary Club of Clemmons “Student-of-the-Month” for February.

Sutton is an excellent student with a GPA of 4.625 and ranks fourth in her class of 563 students.

She is a member of the West Forsyth Orchestra, where she plays the violin. She is a leader in her orchestra class where she tunes the orchestra and make decisions about fingerings and bowings, helps students focus on difficult passages and serves as an example. She placed into the highest levels of All County, Western Region, and the NC All State Orchestras. 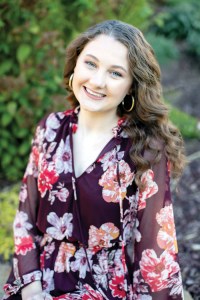 Sutton’s other school-related activities and community service include participating in Titan Buddies, where she mentored and supported an elementary student at Southwest Elementary that had been identified as at-risk because of home life; she volunteered for more than 75 hours at the Animal Hospital of Clemmons for two summers during high school because of her interest in science.

In addition, she has been very involved in West Forsyth High School’s Student Government Association and as junior was representative for the junior class. She helped plan and organize homecoming celebrations, the canned food drive, and a Christmas toy drive. She was elected as the student body president as a senior and is implementing her four-point platform for West’s students during this year of virtual learning.

She created and hosted a Zoom series, called “Let’ s Talk,” in the summer of 2020, as a result of racial tensions in our country. In an effort to educate herself, she invited others to join her in discussions about diversity, effective communication, and unconscious bias.

In her spare time, Sutton takes dance classes and is a member of the Dance Honor Society.

Sutton plans to pursue a pre-med degree in biology or neuroscience and is considering Davidson, Duke, Wake Forest, UNC Chapel Hill or University of South Carolina.

Couriering Clemmons — This week in 1981

Couriering this area this week in 1981 — 40 years ago: Last Friday night, there was a surprise party for... read more