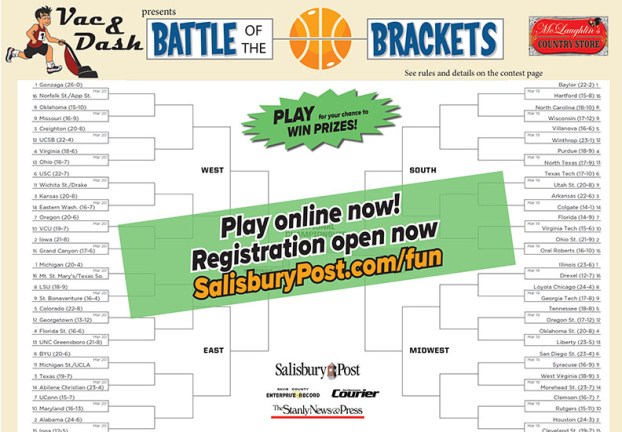 Battle of the Brackets contest is here

March Madness is upon us, and while Duke University is out, the University of North Carolina at Chapel Hill, Appalachian State and UNC Greensboro are in, giving local fans plenty to cheer for.

The Salisbury Post in collaboration with its sister newspapers — the Stanly News & Press, Davie County Enterprise-Record and Clemmons Courier — and media outlets across the country is giving locals a shot at national and local prizes in the annual Battle of the Brackets contest. The contest is sponsored by Albemarle’s Vac & Dash, the South’s most unique specialty store.

The contest gives participants a shot at national grand prizes that include a Sony Playstation 5 for the highest score and $1 million if all games are picked correctly. Each round within the bracket has a national prize of $75 per round. The local overall prize is $100.

Readers can join the basketball bracket fun by signing up online at salisburypost.com/fun and looking for the Battle of the Brackets link. Picks must be submitted by 10:45 a.m. Friday before the first-round games begin. Contestants can create private groups and invite their friends to play. Entries are free.

But there’s good news for those who are like us and frequently out of the running after the first round ends.

If your bracket is busted, you can pick a fresh bracket beginning with the Sweet 16, with a $75 prize for the best picks. There’s also an opportunity to pick the Final Four, with a $50 prize.

Answers to COVID-19 common questions about quarantining, headaches and fertility

What to do if you’re exposed after you’re vaccinated By Cliff Mehrtens Novant Health As more of the population becomes vaccinated... read more