“Throughout the years, the Republican Party has expressed great faith and confidence in me by asking me to serve in positions of great responsibility. Being elected chairman is, by far, the greatest honor, and greatest expression of their faith and confidence. It’s very humbling, and I’m going to do my best to live up to their confidence,” Raymond said. 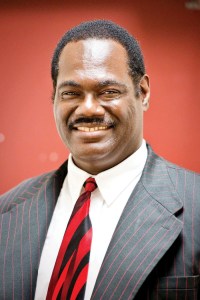 The new chair has a bold vision for the next two years of his term. “The local GOP chairman does not only work for political candidates and local activists.He works for families within his community that want good, responsible and effective government,” he said. “Today, that means restoring in-person learning at schools, supporting our law enforcement officers, restoring confidence in our elections, promoting freedom of speech, and re-opening the economy. So, the people of Forsyth County can expect me to promote and support candidates and public officials that support the same things.”

Born and raised in Boston, Raymond graduated from Winston-Salem State University with a bachelor’s degree in English in 1987. He worked at the Winston-Salem Police Department for 27 years, and retired as a police dispatcher in 2017.

Raymond is also a business owner and a published author. In 2020, he established Frederick Douglass University which produces and sells books about black history. His most recent work is entitled “Black Political History: From the Arch of Safety into the Mouth of the Lion.”

Victory on the Frontline Church services