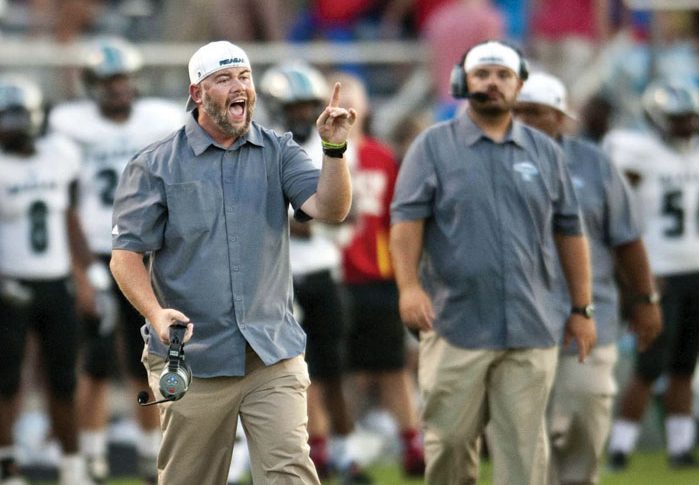 Josh McGee relished having an active childhood. “Growing up, I can’t remember a time that I wasn’t playing a sport. It was always football in the fall, basketball in the winter, and baseball in the spring,” recalls the Clemmons and Lewisville native. “My whole life has always revolved around sports. I’ve always loved being part of a team. The lessons that come with having to work together to achieve the same common goal extend off the field and court.”

McGee was heavily influenced by coaches that impacted his physical and mental game. “At West Forsyth High School, I had the opportunity to play football under Russell Stone in 1999 and 2000. He had this way about him that made every player feel special. Even if you were the least talented, he made you feel like you were ‘the’ guy,” recalls McGee. He finished out his senior year leading the Titans to a Central Piedmont 4-A title at quarterback.

McGee knew that participating in sports wasn’t something he was ready to give up. After high school, McGee headed to Winston-Salem State University (WSSU) and joined its football team. Initially, McGee wasn’t the starting quarterback for the Rams, however, it didn’t take too long to realize the talent that was right under their noses. By the end of McGee’s freshman year, he was starting at quarterback once again and getting recognition for the Rams. McGee exceeded expectations at WSSU’s football program during his time as a player and was asked to be a student coach his fifth year in school by Coach Kermit Blount. “I had gone back and forth about what I wanted to do when I got out of school. I had considered possibly doing something with communications or being a sports agent. I knew if I took that route, I would have to go to law school, and I wasn’t interested in doing that,” explains McGee. “For that reason, I had an extra year in college, and I felt lucky to be a student coach at that time too.”

McGee’s choice of pursuing a degree in physical education set him on the path to influence kids and players. “I knew that I wanted to make an impact like Coach Stone had made on me as an athlete,” says McGee. He also was looking forward to starting a life with his future wife, Amy, whom he started dating when he was 18 years old. The newlywed was hired by then Principal Stan Elrod to be a teaching assist and coach the wrestling team at Reagan High School. “They didn’t have any full-time positions open yet in teaching, and I knew absolutely nothing about wrestling,” laughs McGee. For three years, he coached wrestling. “At first when the guys came out, we put in DVDs and I learned and got up to speed that way,” recalls McGee. “It was a great group of kids and I got comfortable with it fairly quickly.”

After McGee got used to the new sport, his position was temporarily cut. “In 2009, I moved over to Wiley and Hanes middle schools to teach on an every other day rotation,” mentions McGee. “During that time, I also went to be an assistant coach at West Forsyth with Coach Stone in 2009 and 2010 for their football program.” However, as soon as an opening became available back at Reagan High School, McGee was asked back to teach full time in physical education. “I also started as the head coach for Reagan in 2011,” explains McGee.

McGee has loved coaching and teaching at Reagan for the past 10 years. “What makes Reagan special is the people. The students, players, families and administration support you in such a tremendous way. Our principal, Brad Royal, and athletic director, Alexis McCoy, make sure we have what we need to be provide for the students. You can tell how much they care and support the students and faculty.”

When McGee isn’t investing time in his players and students, he’s focused solely on his family. Josh and Amy are parents to Olivia (14), JJ (12) and Maverick (3). “Our free time is spent going to Olivia’s soccer games, JJ’s travel baseball and basketball games, and now even Maverick when he plays t-ball. “It’s such a joy watching your kids do what they love. Being a dad is so incredibly rewarding,” says McGee. He appreciates the lessons and metaphors he can teach his children about life through sports.

Our neighbor reminds us the importance of working hard to accomplish your goals. As Vince Lombardi once said, “The man on top of the mountain didn’t fall there.”