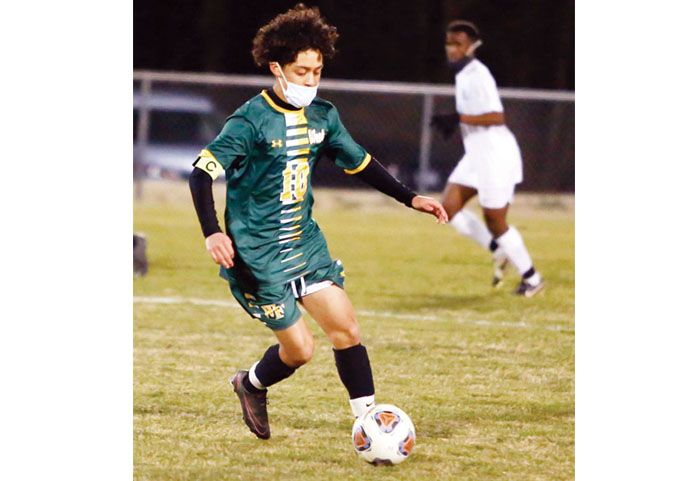 Athletic seasons come to an end in a blink of an eye, and that’s especially true during each high school sports season this school year.

Each athletic team in the NCHSAA, including those at West Forsyth, have a constricted seven-week regular season because of the delayed start to the athletic sports calendar last fall because of COVID-19.

Even though the boys soccer team and the girls lacrosse team at West Forsyth had very successful seasons it just appeared that the seasons were over as soon as they started for the two respective teams.

The boys soccer team for the Titans started their season with a road game at Ledford on Jan. 26 and finished with a first-round NCHSAA Class 4-A playoff on March 26. In between there were some bumps in the road, but there were mostly high notes for a team that finished 11-3-1 overall and 9-0-1 in the Central Piedmont 4-A, winning the conference title outright.

“It was a little touch and go, until the end,” Coach Jeffrey Williams of the boys soccer team at West Forsyth said. “It was like, ‘OK, we’re finally here and hopefully we get to play every game. Hopefully no one gets sick or something from it.’

“But we were all gracious and just having the ability of being together to try to form something that was greater than ourselves.”

West Forsyth, which had a number of roster changes after the boys soccer team last played in the fall of 2019, lost the season opener at Ledford 3-2. The Titans followed that with another loss three days later, 1-0 to Greensboro Grimsley at home.

“I think we were figuring some stuff out,” Williams said. “Every team’s like this. They’re trying to figure stuff out more so than every other year because you don’t have a preseason, or the amount of open fields. For us, it was the familiarity with the players, too, since we had a lot of new players and a good number of young guys.

“I think we figured out some things, moved some people around, and really were held together with a lot of our seniors from the beginning.”

“It’s funny, when conference play started we were trying to figure things out just like everybody else, but I figured we were like halfway there,” Williams said. “It was like how we did things the best, how we worked together as a team.”

During that stretch, West Forsyth had the injury bug crop up. Seniors Clever Morillon and Jeffrey Song both strained their hamstrings.

“We tried to rest Clever and Jeff the last two or three weeks,” Williams said. “Even on Senior Night I let them kick off and they just came straight to the bench.”

“The conference changed from last year,” Williams said. “There were a lot of seniors on a lot of teams last year. And so the dynamics were a little different.

“I expected to compete for the conference, for sure. I’m not I would’ve predicted us going undefeated, though. I think that’s a testament to the guys.”

To back that up, Williams said that each position player either had a goal or an assist. Jack Watkins led the Titans with 10 goals, and team finished with 40 overall. Jesse Guzman led the team with seven assists, and the team had 29.

“I’ve never had a team like this where whatever job is just fine,” Williams said. “They do it. They just do it.”

After defeating Glenn 3-0 to finish the regular season, West Forsyth had to wait three days before the NCHSAA pairings were released. West Forsyth was one of seven conference champions in the Class 4-A Western Regional, and each of those seven teams were put into a hat to determine seedings for those teams. West Forsyth drew 7 and played its lone playoff game against No. 10 Raleigh Athens Drive, which finished runner-up in the Triangle 8 4-A conference.

“Really, they cut down the teams from 64 to 32 (16 in each regional), and you’re really skipping the first round, per se,” Williams said. “I know when they put the seven conference winners in a hat, they pulled it out, and we were just the seventh one.

“But like everybody’s a good team in the playoffs.”

Despite the early-round loss, Williams looks at the season as a success.

“I guess there’s multiple thoughts that goes through,” he said. “Hey, we’re to win everything, better ourselves, better our team.

“It’s almost like every single game starting with our first scrimmage to the last it’s like we’re playing with house money.”

The West Forsyth girls lacrosse team also had a very successful season. Coached by Doug Brawley, the Titans finished 12-1 overall and finished the Central Piedmont 4-A undefeated to win the conference.

The Titans started the season on Jan. 29 with a 12-8 nonconference win at Northern Guilford. After just one nonconference game, the Titans defeated East Forsyth 14-12 on Feb. 2 in the conference opener, and followed that with a 13-1 home win against Davie County.

West Forsyth’s toughest competition this season in the conference was Reynolds, which is the perennial favorite to win each season. West Forsyth traveled to Bolton for the first game and defeated Reynolds 10-9.

“You’re a little nervous because you know how good you are, how good you’re capable of being,” Brawley said. ‘It’s just whether or not you match up.”

Brawley said the Titans immediately came out against the Demons with confidence.

“We were definitely not intimidated,” Brawley said. “It’s been a rivalry for several years now. Somebody was telling me, like in the last seven games, one of those games was decided by more than one point.

“So it’s been a close battle that, unfortunately, Reynolds has had the upper hand the last couple years.”

After outscoring Glenn and Davie 30-5 in the next two games, West Forsyth met Reynolds on Feb. 24 in Clemmons for the rematch. West Forsyth won that game 8-7.

“I talked with them time and time about these memories stick with them for the rest of their lives,” Brawley said. “And it was just a matter of, whether they’re good memories or regrets, missed opportunities.

“They took that very seriously and they were really a special team.”

The Titans outscored their opponents 168-85, and that’s after a second-round NCHSAA girls tournament loss on March 17 to powerhouse Weddington 17-4.

Senior Chloe Christensen led the Titans with 54 goals and Sidney Gurley chipped in with 24.

“Offensively, Chloe Christensen was our leading scorer and actually was chosen as the Offensive Player of the Year for the conference just this past week,” Brawley said.

The announcement of the girls lacrosse pairings came out on March 13 and the first round started on March 15. Despite winning the conference, West Forsyth was announced as the No. 8-seed and played host to No. 9 Charlotte Ardrey Kell.

“I thought we were way under-seeded,” Brawley said. “Now, I understand they didn’t really do a seeding so to speak. I was told it was basically just a draw. They put the conference winners, the eight of them, and drew them out of a hat. They put them in order. They put the other eight teams in a hat and pulled them out.”

Every game is a learning experience for the Titans.

“We were hoping to play someone different,” Brawley said. “We could’ve ended up with Reynolds again, and nothing against that, because we love playing them. But you just want expose the team to different opportunities.

“When we heard Ardrey Kell, like I said, I thought we should’ve gone higher, but still it was a team out of Charlotte we hadn’t played before. So we were excited about it.”

Then came the game against Weddington just two days later. It just happened to be the lone loss of the season for West Forsyth.

“We ended 12-1 (record), losing to Weddington, who’s the No. 2 team in the state of North Carolina and the No. 3 team in the nation,” Brawley said. “So even to get on the field with a team of that caliber, it was fun. We obviously didn’t finish the way we wanted to, but it was still a great experience.”

Spring sports get cranked up at West