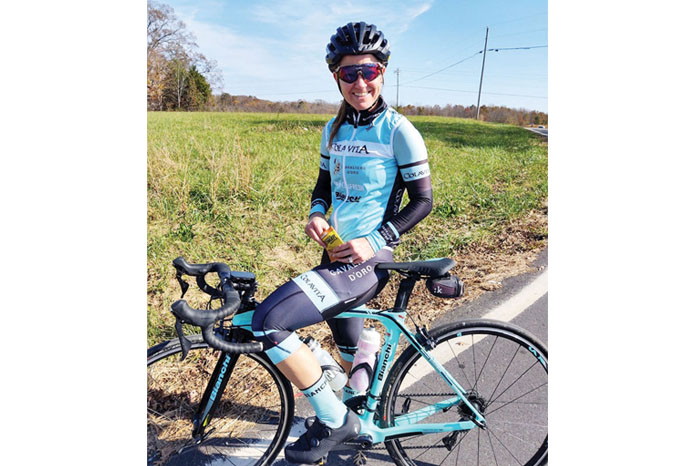 Dr. Sara Tussey Rains has always loved living in the Lewisville and Clemmons community because the value it places on family and friends. “I know a lot of times when you’re a kid you can’t wait to get away once you’re older, but I always knew that this was home,” says Tussey Rains.

Tussey Rains was an active child, starting organized sports at the age of 4. “I started gymnastics and the swim team early on, and soccer started around kindergarten,” remembers Tussey Rains. “I loved being part of a team, and the aspect of working together.” As she grew older she played basketball too. “I liked playing different sports each new season. I think it was good for helping to prevent burnout and injury. I was fortunate to have many great coaches through the years too,” Tussey Rains mentions.

Tussey Rains’ family was equally as active. “My dad, and I would go on bike rides together. When I was 12 years old, he signed us up for a relay triathlon. You were technically supposed to be 15 years old to participate, but I snuck in and did the swimming. My dad did the biking and running part. After that race, I was hooked. When I turned 15 years old, I started doing them regularly. It became my passion to do the triathlons,” remembers Tussey Rains.

Tussey Rains’ participation in cross country and swim team while at West Forsyth High School was helpful with the running portion of the triathlons. She trained for the biking portion with her dad on the weekends. “When I first started out with triathlons there weren’t any girls in my age group so I would win because of that,” laughs Tussey Rains.

As Tussey Rains prepared to go to college at the University of North Carolina at Chapel Hill, she knew that she also wanted to continue participating in triathlons. “My dad had attended Chapel Hill and early on both my sister, Emily and I were brainwashed into becoming fans,” jokes Tussey Rains. “It was the only place that I wanted to go so I’m glad that I got in.” The athlete chose an academic focus that paired well with her lifestyle. “I majored in nutrition and got a bachelor of science degree in public health. I was very interested in sports performance and sports nutrition so I wanted to find something that would allow me to have a career in health care that could help people.” Tussey Rains decided she would go to chiropractic school after graduation. “I had an injury that was greatly helped by the chiropractor that I visited. I knew that would be a great fit for me too,” explains Tussey Rains.

Tussey Rains headed to the National University of Health Sciences in Chicago after her undergraduate program at Chapel Hill. “The chiropractor that had influenced me had highly recommended their program because of how their philosophies and belief systems,” explains Tussey Rains of her four-year doctorate program. “It was during my time in Chicago that affirmed I really wanted to move home once I was done. I also fell in love with distance races and started training for Ironman competitions during that time too,” notes Tussey Rains.

Tussey Rains kept the promise she made to herself and headed back to North Carolina in 2005 after she completed the doctorate program in Chicago. “I had to finish taking my exams, get certified and licensed before I was able to practice. My first job was in Lexington,” says Tussey Rains. It was during this time Tussey Rains also participated in some of her favorite races. “In 2008 and 2009, I won the Beach to Battleship Ironmans which meant so much not because I won, but because of the injuries I had to overcome to even participate. What these races teach you is about perseverance which is much more satisfying than winning when you overcome an injury or obstacle,” says Tussey Rains. “These races were also special because it was in North Carolina. A lot of Ironman races required you to travel, and this one was in my home state.”

Tussey Rains accomplished another feat that was outside of the athletic competitive realm when she opened her own practice. Although right before she officially opened her doors, she had a bad bike crash. “It delayed me from opening my business for about two months,” says Tussey Rains. However, it opened another door for Tussey Rains that she was least expecting. “During the crash I met my future husband, Daryl,” says Tussey Rains. “He actually ran over me.” After the initial unfortunate encounter, Daryl and Sara kept running into each other on training rides and began dating in 2008. “Within the first year of dating we knew we wanted to spend our lives together,” says Tussey Rains who was embarking on two major life changes personally and professionally.

About two years later in 2010, Tussey Rains was sidelined with an injury that prevented her from participating in triathlons. She was able to continue riding and was asked to join a team. “I really enjoyed it, so I kept doing it instead of going back to the triathlons once I healed. I really have always enjoyed team sports,” mentions Tussey Rains who participated in both local and regional events for several years. Tussey Rains dipped her feet into some national and international racing events and caught the eye of someone on the highest tier level of the cycling (the Union Cycliste Internationale) world. Tussey Rains was asked to race with them in 2016. “Daryl and I talked, and we decided that I would wind down my business and focus solely on racing because at that point when I was home, I worked a little, but it was sporadic because of my training schedule,” says Tussey Rains. “We also got married that year, bought 40 acres in Lewisville and began the process of building which took several years. Daryl did the majority of the building with the help of a general contractor who was also a personal friend.”

Not shy from a challenge, taking a risk and new adventure, Tussey Rains relished in the world of professional bicycle racing. “It’s a full-time, seven-days-a-week job. If you’re not training hard, you should be resting. Depending on the time of year, you go through different phases. What is great about racing is that it really is a team sport. One of the athletes on our six-person team is a six-time national champion and a phenomenal racer. She is one of the winningest cyclists in our country, and my job is to help support her. Support is critical with training and I’ve been very lucky to experience that myself with my own family. Daryl, my parents, my sister, they’ve all been there for me, and I couldn’t have done it without them. I will be forever grateful for their unwavering support,” says Tussey Rains.

Tussey Rains is gearing up for her season to start again in June. “I had taken some time off in 2019 and was supposed to start back in 2020 but COVID-19 happened. I’m looking forward to getting back to the Colavita and Hello Fresh team. I’ve been utilizing the home gym Daryl and I created during the pandemic, but it will be nice to be back with everyone again.”

Our neighbor has proven that hard work, determination, and knowing that taking risks often lend the most fruitful rewards both on and off the road.

Season over: West falls to Davie 36-35 in overtime