Twins for the win: Avery and Victoria McGuirt instrumental for West soccer 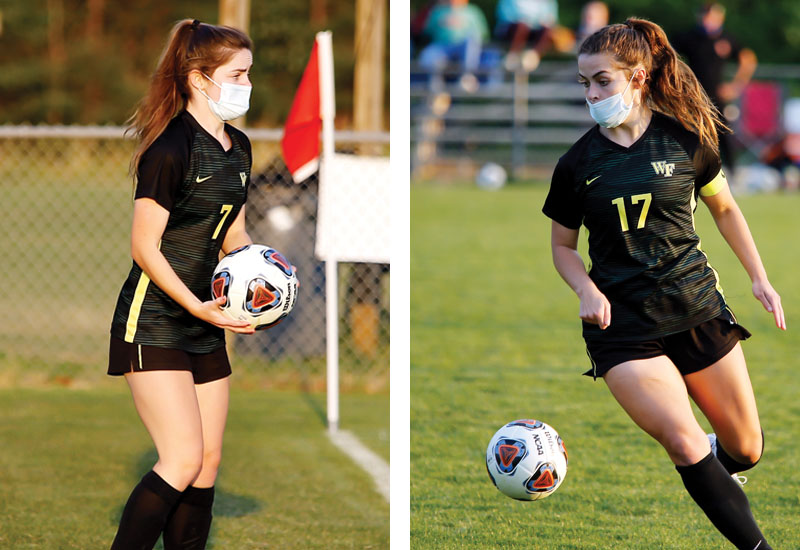 That’s the case for seniors Avery and Victoria McGuirt, who are fraternal twins, and play on the West Forsyth girls soccer team.

“I think it’s always been fun because I’ve always had someone that I could talk to and someone that I’m really close to,” said Avery, who is 2 minutes older. “We’ve always been on the same team, so that’s also helped. So I think the combination of that has made us super close.”

Avery has held the proud badge of being the older twin, but that has faded as they’ve gotten older.

“I definitely did (hold it against Victoria) when I was little, but not so much now,” Avery said.

Both twins have been instrumental for the Titans to have had a very successful season this year. Avery is a midfielder and Victoria is a fullback for the Titans finished the regular season 8-1-3 overall and 6-1-3 in the Central Piedmont 4-A, runner-up to Reagan. West Forsyth played its first-round NCHSAA Class 4-A Monday night as No. 11 seed but lost 1-0 to No. 6 Raleigh Athens Drive to end the season.

“Especially in soccer, it’s been fun to be playing,” Victoria said. “Besides I’m with someone with know well enough, like when I’m playing that it’s easy to understand what they’re doing. And sometimes it’s hard with new people, but with her it’s a lot easier to (know) how to play.”

Born Dec. 1, 2002, these 18-year-olds are the children of Dr. Will McGuirt, who is a doctor at Piedmont Ear, Nose & Throat Associates, and Robin McGuirt. They are also siblings of 25-year old sister Taylor, who lives in Charlotte, 23-year-old brother Ian, who goes to Wofford, and 21-year-old brother Colin, who goes to Davidson.

“I think in our family it didn’t really affect us because we’re all so close and it’s never been an issue,” Avery said. “But I think definitely having someone the same age helps.”

Although they are fraternal twins, there is one stark difference.

“Maybe in the way people treat us a little bit because we don’t look alike,” Avery said. “So they never think we’re twins, but yeah, they always think I’m the other older one, so I think that’s different, but besides that, not really.”

Instead of people calling them by their actual names students and faculty at West Forsyth call them something else.

“It’s funny, around school people refer to us as like, “The Twins.'” Victoria said. “Some of my teachers will even do that.”

The twins have calculus together this semester, but neither has returned to school yet because of COVID-19. They both opted for online learning.

“I would definitely say it was a little bit hard, but it was nice to have someone going through the same thing as me so I could lean on them for support,” Victoria said. “I think we just kind of push each other to be happy and to go outside and do stuff. That’s kind of made it easier for both of us.”

The twins grew up playing soccer and started their high school careers as freshmen at Mount Tabor with Coach Jay Benfield, who was a goalkeeper at West Forsyth. They transferred to West Forsyth after their freshman years.

Neither twin has anything against Mount Tabor. It was just decision made for personal and academic reasons.

“We both wanted to transfer,” Avery said. “I think she would rather have gone to Reagan at the time. I don’t know. We toured both. We toured Reagan first and didn’t love it. And then we toured West, and we really liked it. We had one of our best friends that went there. She just told us all these good things about it. We knew how good academics were there.

“They were just off the state championship win, so I think that drew us to that school. But I think at the time when we made the decision she wanted to go to Reagan and I wanted to go to West. I think she’s happy that we made that decision.”

Coach Scott Bilton helped guide the Titans to the NCHSAA Class 4-A state championship in 2017.

“I knew they were twins just from talking to Coach Benfield,” Bilton said. “You know, he just told me that they were twins because I definitely wouldn’t have expected that because they’re pretty different in a lot of ways.

“They do share some characteristics. They’re both very much students of the game and they love their professional soccer. They watch Manchester United (in the English Premier League) and all that kind of stuff. But they have those characteristics, but other than that they actually have some pretty different personalities and different playing styles, as well.”

In the three years since the twins have played at West Forsyth, Bilton has noticed some subtle differences.

“Avery I think is more introverted almost in the fact she’s a little bit more quiet, sits back and observes, and then reacts,” Bilton said. “And Victoria is not shy in the fact that we always joked that whenever we’re doing something you know you’re going to get this: Victoria would say, ‘Hey, I have a question.’ And it was always a question.

“And what was interesting is V would always be asking questions during the game, too. ‘What do you want me to do in this situation?’ ‘What do you want me to in this situation?,’ And Avery is more about trying to observe a lot of times and kind of figures out what she thinks she needs to do. So it’s a pretty big difference and I think both of them get on to each other because of those differences.”

Although the twins had a chance to be with each other at home last year when COVID hit, they lost most of last season because the season was halted after five games. They lost most of their junior seasons and were unsure about whether there would even be a season this year — their senior year.

“It was really sad, especially since we didn’t get a chance to celebrate the seniors that we had in a normal way,” Avery said. “But it was also sad to not make a playoff run with them. But I was really certain that we were going to have a season this year, and that was what I was looking forward to.”

Practice started on March 1 and West Forsyth played its first game on March 15 against Mount Tabor. West Forsyth won that game 5-0, then defeated Greensboro Page 2-1 two days later in its final nonconference game. West Forsyth opened conference play March 22 against cross-county rival East Forsyth, and won that game 1-0, followed by a 5-0 win at Davie County and a 2-1 win in double overtime against Reynolds.

“I’m definitely grateful for having a season because I know in the situation we’re in it was almost unlikely to have one,” Avery said. “So I’m glad, and I know, like the seniors (last year) like I said before didn’t even get to have one. So I’m just appreciative of what I got.”

Reagan tripped West Forsyth 2-0 on March 30 for the Titans lone loss. It rebounded to defeat Glenn 5-1 at home, tied East Forsyth 1-1, defeated Davie County 5-0, and tied Reynolds 1-1 and tied Reagan 2-2 before finishing the regular season last Thursday with a 10-1 win against Glenn in Kernersville.

“Our coach and our teammates — they bring the best energy they can to the games,” Victoria said. “At some point our unluckiness with goal scoring is going to change. I think that will happen during playoffs.”

Both players play club soccer for Fusion, but on different teams. Avery suffered a foot injury during club season and missed the first few games of the Titans’ season. She also had knee surgery when she was a freshman.

“It’s one of those things where it’s hard to tell,” Bilton said of Avery’s injuries. “Because every time after she has one we’ve said, ‘Hopefully that’s it now.’ It was a little bit scary coming into the season because we knew Avery was going to be a captain, and honestly was going to be a vital cog for us. She came to me right before the season started and said that she had a stress fracture in a club event in her foot.

“The estimate that they originally gave her to come back was going to be after spring break (which ended April 11). You know, that was pretty hard for us to take and it was hard for her to take. But she just really dedicated herself to doing anything she could to make it improve. And obviously she was able to come back much sooner than expected.”

“I like credit him with everything because he’s been so sweet to us, and he’s an amazing coach,” Avery said.

Bilton, who has three daughters, considers that a badge of honor to be considered a second father to the McGuirts.

“They’re pretty special, and I tell this sometimes too to our kids, is, we are a family, and sometimes we get mad at each other, sometimes we annoy each other, and things like that,” Bilton said. “But at the end of the day, we still love each other. I know and I hope the girls know this, I’ll do whatever I can to help them. And they come out there we get a chance to play, and they lay it on the line.

“And I take that seriously. They’re giving me a lot, and I’ll try to help them in any way I possibly can.”

Bilton’s wisdom seems to have permeated the team.

“I think our team is one of the most resilient teams,” Victoria said. “There’s been a lot of time this season where we’ve been down a goal and we’ve come back to tie or beat a team we were playing against, and I think that just goes to show that all the unlucky things that happened to us, we just pushed through them.”

Despite the injuries, Avery’s going to play soccer at Division III Carnegie Mellon in Pittsburgh. Victoria will stop playing competitive soccer after the season and focus on going to college at Davidson. Both are leaning toward following in their father’s footsteps and becoming doctors.

“I’ve always wanted to play soccer in college, but I didn’t want to give up my academics to play in a school just to play,” Avery said. “So I kind of have the best of both worlds because I can play on a really good team and have really good academics.”

For the first time, really in their entire lives, the twins will be separated. They will be going to separate colleges, hundreds of miles apart.

“I’d say for the majority we’re together, so it’ll definitely be different,” Avery said.

It’s not the end of her high school career for Avery. She’s been chosen to play in the East-West All-Star Game in July.

“I’m really surprised and I’m really honored to do it having been chosen,” Avery said. “Because there are so many great players in our state.”