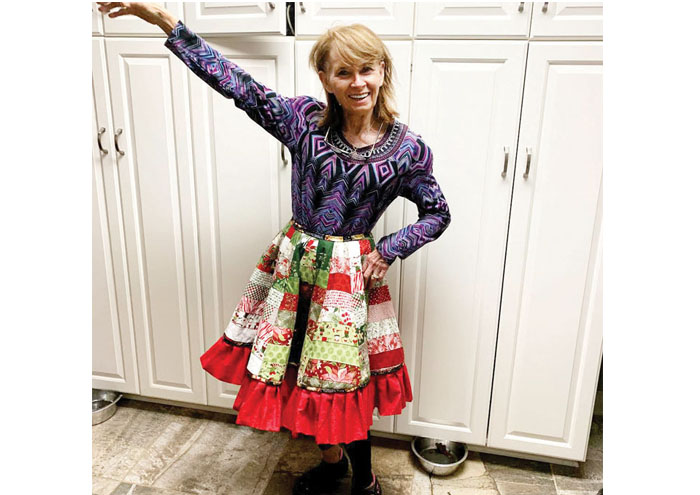 Charlotte Eggers and a Christmas skirt she created.

Charlotte Eggers has always found most at home with her close family and friends. Growing up in Mobile, Alabama, with five other siblings, all of them girls except for her younger brother. Eggers found her extroverted personality helped with the constant entertainment. “We would spend the warmer days and summers in Point Clear, Alabama, where the author, Winston Groom wrote ‘Forest Gump,’ and it was just wonderful. It was an old barrack home and we made so many cherished memories there as a family,” recalls Eggers. “I water skied a lot, and it was one of my favorite activities for exercise.”

Eggers was also active in sports as a child in school playing both volleyball and basketball. “I was too tiny to play basketball, but I still did it anyways even though it was hard to reach the goal,” laughs Eggers.

When it was time to head to college, Eggers initially went to school in Louisiana before transferring to the University of South Alabama to get her degree in education. “I wanted to teach vocational business,” explains Eggers. During her time in college, Eggers would meet her future husband, Jerry. “He told people that I met him on a bridge, and he took one look at me and knew he was going to marry me when I waved at him. I don’t exactly remember doing that, but I wave at everyone,” jokes Eggers. “We didn’t date right away because he was seeing another girl, but he finally ended the relationship and with the help of my brother persuaded me to give him a chance. Jerry and my brother were in the same fraternity, and he threatened to black ball my brother if he didn’t make sure I gave him a chance.”

After Jerry and Charlotte graduated from their undergraduate programs they were looking into their next steps. Charlotte decided to go to graduate school at Georgia State University. “At that time Jerry and I had been dating off and on throughout college. He knew at that point he wanted to get married, and kept bugging me to get engaged,” smiles Eggers. “I left my graduate program to follow him to medical school and got married. When you’re Catholic, you know you’re getting married for life, so you want to make sure you’re really making the right decision.”

After leaving her graduate program, Eggers embarked on her teaching aspirations. “I taught typing and business math in high school,” mentions Eggers. “Jerry and I started a family pretty quickly after getting married. I was 23 when we got married, and at 25 our first child, Jimmy was born. After that I stopped working and stayed home to take care of the kids. We had three more all close in age, Daniel, Audrey, and T.J.”

After T.J. was born, Charlotte and Jerry decided to leave Alabama to take advantage of a job opportunity in Winston-Salem. “It was tough at first because all of our family and friends were in Alabama, but Jerry wasn’t happy at the job he had with his dad. They butted heads a lot. However, when your husband and best friend isn’t happy with his career, you want to be supportive. As fate would have it, one of the residents he trained with at Vanderbilt told him about an open position at Forsyth Medical Center in pathology. He came and interviewed, and we moved shortly afterwards. I came first to get the kids set up in school. One of our kids stayed behind to finish out the year, but we wanted to hit the ground running and have friends and a community for the children. I also called Catholic Services and found someone who had a young baby herself who was looking to make extra money by caring for other children too. It ended up being someone who became like family and would be in our lives for life,” mentions Eggers. “Fortunately, when you have kids, starting over is not as challenging because of all their activities.”

Eggers relished being a mother to her active bunch. “If I could have done anything differently it would be to have been more consistent with them. I should have studied a dog training book to have made that possible,” jokes Eggers. “Both Jerry and I really enjoyed raising them in our community. Family was equally important to him,” says Eggers. Both Charlotte and Jerry were very active in giving back to the community that embraced their family so quickly. “We loved working on fundraisers at Forsyth Country Club for the Community Care Center. That was meaningful to us,” mentions Eggers. She also served as the president of the Medical Alliance of the Piedmont for several years in 2007 and 2008.

Once Jerry and Charlotte’s children grew and became young adults and started their own families, they loved tackling their greatest role as grandparents. “It’s just wonderful because I can take the good and leave the bad. With seven grandbabies ranging from 12 to a little baby born this past November, it’s just wonderful,” says Eggers who is affectionately referred to as Cha Cha by them. Eggers had hoped to continue celebrating all their milestones with her best friend, however Jerry passed away on July 19, 2016, from battling cancer. “It was really hard. I miss him every day. Jerry took joy in the little things. Our family always knew how much he loved us and was proud of us,” reflects Eggers.

Eggers too had her medical setbacks that challenged her; developing multiple sclerosis and suffering a stroke. “Having always been active all my life playing tennis and golf as an adult, and of course water skiing at the lake, it was really challenging for me,” notes Eggers. These days, she finds extracurricular activities like quilting and financial investments helps keep her stimulated mentally. “One of my most favorite quilts I did was for a friend who lost her husband. I sewed all of his ties together because I know how much those acts of remembrance are so meaningful when you lose someone close,” says Eggers. “I also like to gamble, so managing my money and trying to make more of it is the best way to do that,” jokes Eggers.

Despite the loss and setbacks medically, Eggers always manages to find the positive and stay focused on gratitude. “I’m lucky to have my family and close friends in this chapter of life. They’ve always been there for me,” says Eggers.