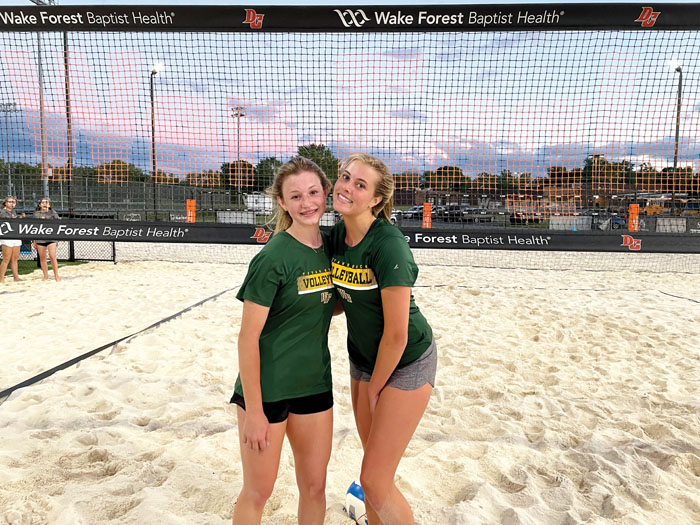 Beach volleyball is a sport that not many people know about in this area. That might not necessarily be the case at West Forsyth.

That’s because the Titans have a burgeoning program, and with that, has come a great deal of success in a sport that is unsanctioned in North Carolina, and therefore isn’t part of the sports offered by the NCHSAA. This season, which just concluded over the past weekend in Apex at Southern Sand Volleyball, was littered with teams from West Forsyth who showed that even a school that’s nowhere near a beach can do well.

The boys team of Hayden Lichty and Zach Lamoureux finished runners-up to a team from Wilmington Hoggard. A girls team from Hoggard also tripped West Forsyth. After finishing the regular season and conference tournament undefeated, Clara LaRue and Kayla Kozak, won the first three matches in pool play, but they lost in the semifinals to Hoggard, which ended up winning the championship.

“It’s definitely tough,” said LaRue, who is a junior. “I mean, I’m not a senior, so I’m excited to come back next year. Me and Kayla will probably still play some tournaments outside of school at Beach South (in High Point) and other clubs like that.”

LaRue, the daughter of Rusty LaRue, who was the head varsity basketball coach at West Forsyth for three seasons from 2015-18, also played football, basketball and baseball at Wake Forest before playing in the NBA and other leagues in America and Europe. After playing professionally, Rusty LaRue became the head basketball coach at Greensboro College and followed that to become the basketball coach and athletics director at Forsyth Country Day. He later joined former Head Coach Dino Gaudio on the Wake Forest men’s basketball team as an assistant in 2009 and stayed there with Gaudio and Jeff Bzdelik until 2014 when Danny Manning was hired.

“We’re definitely going to be friends and hang out, so I don’t think it was too bad of a loss,” said Clara LaRue, who also plays on the girls indoor team at West Forsyth, which is sanctioned and finished 5-5 this past season. “But we were upset that it was over. I think we’re glad just to have had such a great season.”

Clara LaRue took the team’s lone loss in stride, looking at the silver lining of playing the best-of-three sets match with Hoggard to the limit after beating a team from Croatan 2-0 in the quarterfinals. Clara LaRue and Kozak earlier played in pool play and defeated a team from Reagan, Cornelius Hough and New Bern.

“The team we played was tough,” she said. “We did beat them one set, so it was a good game. I think we just know that we played our hardest. I think we’re just proud how we did.”

As for Kozak, who is a sophomore, this season has been a wild ride for her. She transferred from San Antonio, Texas, last summer, and with that, had to adjust to new city, new school that was doing virtual learning because of COVID-19, new friends, and a new team.

“I feel like it was good,” Kozak said. “…As a sophomore and junior, I think that’s pretty good.”

“It was really fun just to like play with (Clara LaRue) and stuff,” Kozak said.

Clara LaRue broke her ankle early in the indoor season against East Forsyth, but Coach Lauren Gillon, who coaches both indoor and beach volleyball at West Forsyth, thought that LaRue and Kozak could be a good team.

“I wasn’t thinking about beach in the fall,” Gillon said. “So we finished that season and started moving into thinking about beach I knew that they would make a great pair just because of the experience and the connection that they had indoor, as well. They were friends from the indoor team, so it just kind of seemed like a no-brainer for that.”

Although Kozak was new to the school, she starred for her team in San Antonio. And Clara LaRue had already established herself at West Forsyth as a stellar player for both the indoor and beach teams. LaRue played with Madie Lichty her first two seasons at West Forsyth before Lichty, who is the sister of Hayden, graduated last year. Madie Lichty is now playing beach volleyball at Florida Gulf Coast.

“I think that’s one of the cool things about Clara this year, is that she has stepped into that leadership role,” Gillon said. “In the past few years she’s kind of been the baby — you know, she was a freshman on varsity and then she was a sophomore on varsity still pulling a huge chunk of weight on the team, scoring us a lot of points and was crucial player for us in 2019 season when we did very well (finished 24-5 in indoor and lost to Charlotte Ardrey Kell in the NCHSAA Class 4-A quarterfinals).

“She was more than a role player, but still kind of a baby because we had so many seniors. And so this year, her being and still playing the role of being a dominant player, and then Kayla coming in not knowing anybody, Clara developing those leadership skills really translated to the beach season in helping Kayla just kind of feel integrated and comfortable, and just kind of like that was always there really.”

Switching roles for Clara LaRue was beneficial to her after following Madie Lichty the previous two seasons.

The bond between Clara LaRue and Kozak melded quickly.

Clara LaRue came to Kozak about the possibility of playing beach volleyball together.

“She asked me, I think at the beginning of this year, if I wanted to play with her, like as a partner,” Kozak said. “And as the season started, we just got practice and played together.”

Clara LaRue didn’t let her ankle injury keep her from thinking she wasn’t going to play beach volleyball. She had about a three-month rehab and still wear an ankle brace. She even says that the sand for beach volleyball has helped in her rehab.

“It was tough,” Clara LaRue said. “I had to sit out the rest of the indoor season and I would just go to practices and watch them play. But it was definitely hard to not be able to help at the end of that. Yeah, I don’t know. It’s not been the best time, especially with COVID and not having anywhere else to go and being home all of the time. But (I) got through it.”

“Kayla’s younger than me. Madie was a junior when I was a a freshman,” Clara LaRue said. “Madie was definitely like — she would tell me what I needed to do, and she was definitely like my role model at the time. And I feel like with Kayla, Kayla’s a sophomore and she’s younger than me. So I feel like I’ve kind of moved into that (leadership role). I think she would probably say that. We keep each other level-headed and we work well together.”

Kozak is more quiet and reserved, so she relishes the motivation that Clara LaRue gives her.

“I feel like she kind of just tells me what to do,” Kozak said. “Like, she’ll just yell at me on the court and stuff. It helps me play, too.”

Gillon believes Clara LaRue and Kozak have the perfect personalities and skill sets to play with each other.

“I think Clara and Kayla being on the same level right now — Kayla’s a great defensive player. She’s got a quick first step. She reads the ball really well. She reads the court really well. She blocks shots,” Gillon said. “And with Clara, you get more power from her swing. You get a block, you get an aggressive serve. But they kind of balance each other out I think little better than Clara and Madie did.”

With two sand beach volleyball courts at West Forsyth, and multiple boys and girls teams playing for the Titans, they are set up for success for years to come.

“I think some people kind of questioned it at first,” Gillon said. “We have two beach volleyball courts on our campus that our booster club funded, and we’re so appreciative of that. That alone, having the courts, has allowed our school to grow with the girls and the boys programs.”

It’ll likely be well after Clara LaRue and Kozak graduate from West Forsyth, but both hope that it will be a sanctioned sport by the NCHSAA in the not-to-distant future.

“I think beach volleyball would be a great sport,” Clara LaRue said. “Like, I think it is definitely getting more popular and I think more people are playing, and I definitely think it could be (sanctioned).”