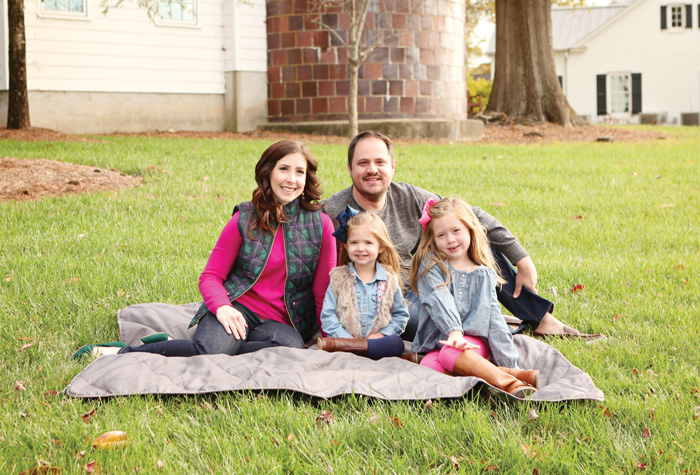 Melissa Stone grew up in South Florida as the older of two sisters. “My family and I have always been very close,” recalls Stone. “One of my favorite things to do with my mom as a kid was to bake.” Stone was always encouraged to be active as well. “I swam as a child, and really enjoyed it and the endorphins from exercise.”

In high school, Stone would meet her future husband, Justin. “It’s funny because we were friends first, and then later went on to date. I was dating his friend when we first met and he was dating mine, so we knew each other but things didn’t come together until a bit later,” explains Stone. After high school Stone headed off to the University of Florida in Gainesville to study to become a teacher. “I received my undergraduate degree in education, and then decided to stay there to get a master’s in elementary education,” notes Stone. She taught in Florida for three years after she completed her degrees.

“Justin and I got married after my first several years of teaching. He got a job offer in the Winston-Salem area, so we moved a week and a half after our wedding,” remembers Stone. She began teaching at Southwest Elementary School when the Florida native established roots in Clemmons. “The teachers, parents, students and community were a great environment to work in,” says Stone. “When my first daughter, Layla, was born almost eight years ago, I knew I wanted to stay home to raise her and stopped working at Southwest. We had our daughter, Blake, who is now 5, several years afterwards.”

Stone knew that professionally at this point in her life she wanted to have something that would provide flexibility. “As much as I loved baking with my mom, what started out as something fun turned into a side job. I had always made Oreo balls through the years for friends and family when we had get togethers. I didn’t ever think much about the way they looked, just the way they tasted. Then I started to think about the taste and design aspect. I had some friends approach me about making them for their events and gatherings. I went back and forth about a fair price to make it worth my time but also not too pricey that it would turn people away,” explains Stone. “Around Christmas time of this year, I put it out there on my personal Facebook page that I was going to take orders. I was blown away by the response. It was so overwhelming that I began my Oreo Balls by Melissa Facebook page to help manage requests and take orders.” Stone enjoys that she can complete the orders while her kids are in school or are sleeping so she doesn’t have to miss out on time with them. “I haven’t had to say no to any orders that have been requested yet, however, I wouldn’t mind having more space to bake and store them,” jokes Stone. “We had thought through Justin’s job that we were going to be transferred to New York but that has been put on a hold indefinitely. We had even sold our house and are in a rental with no garage and limited kitchen space while we figure out what the next chapter is.” Stone’s future in her new business is evolving also. “My daughter, Layla, keeps saying that she’s going to put money aside to open a store which is so thoughtful and sweet.”

Although Stone loves to bake and enjoy sweet treats, she balances that with her passion for fitness. “I had always been a yo-yo workout person. When I had gotten pregnant with Layla, I realized I needed to get my act together and worked out and lost the baby weight. With Blake, I didn’t get to take organized classes until she was one because I didn’t want to interrupt her nap schedule. Debbie at the Jerry Long YMCA told me about some of their group programs. I signed up immediately for a Les Mills program named GRIT and loved it. I also started taking the Les Mills bodyattack class and became hooked to the high energy fitness regimen,” explains Stone. She was approached by the regional director of wellness experience at the Jerry Long YMCA to start teaching. “Six months after I was in full throttle of taking classes, I received the message that they needed another bodyattack instructor. I was in shock first, but then figured if I was committed to taking classes, I might as well teach them since it was the combination of my passions. Training was incredibly hard, but I persevered through it, and am so glad that I did. I love the workouts, other instructors, and training people to be their best.” Almost four years later, Stone is glad for the balance the exercise has provided to her life. “With both the baking and instructing, it has added a whole new aspect to my life. I get to interact with people I wasn’t previously meeting, and I enjoy it so much,” she mentions.

Our neighbor reminds us that life is always evolving, which can lead to new challenges and rewards. “If you don’t try new things, you can’t open yourself up to find things you love,” reflects Stone.