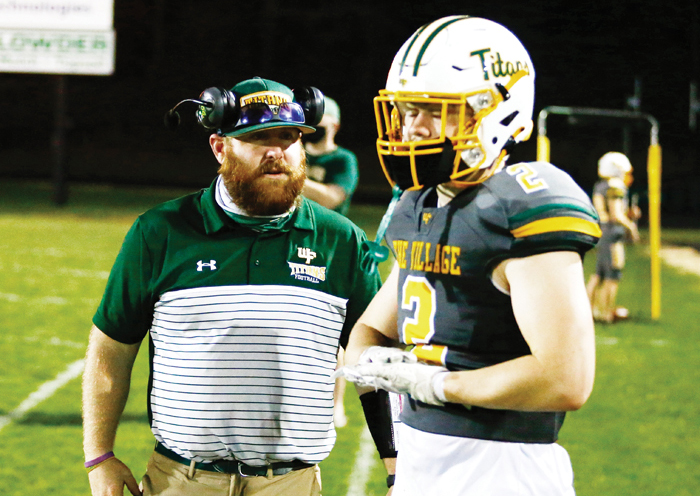 After a year without the East-West All-Star Games, last week brought the anticipation of the announcement of the football rosters by the North Carolina Coaches Association.

“It’s exciting,” Coach Adrian Snow of West Forsyth said. “I’m excited for those guys. It’ll be their last high school football game. Both of them will move on and go to college and different things, so they’re excited about it.”

Marzano, who is a 6-foot-2, 260-pound left guard, said Snow called him in advance of the official announcement to let him know he made the team.

“I’m just so excited that Jake and I get to put on for the team again,” Marzano said. “Every Friday night we were able to go out with our brothers, to go out on the field and all play, and show out for our West Forsyth Titans. So it’s kind of like we get to do that one last time.

For most of the Titans, they thought they had played their last game of the season on April 9 after losing to Davie County. Although the Titans finished 4-1 overall and 2-1 in the Central Piedmont 4-A they missed the NCHSAA Class 4-A playoffs. Hill even broke his collar bone against Reagan in the penultimate game of the season.

“I think I found out like two, three weeks ago,” said Hill, who is 6-foot, 185-pound defensive back, who also played point guard on the boys basketball team. “Coach Snow called me. I was actually in class. He was like, ‘Jake, I’ve got a question.’ And I was like, ‘Oh, God. That can’t be good.’

It makes it all the more special because Hill and Marzano are good friends, and Hill even lived with Marzano and his family for a period.

“I’d known that Carter was playing,” Hill said. “And it was probably a month later that I found out that they asked me to come. I was super-excited for that, so it was more excitement than anything.” 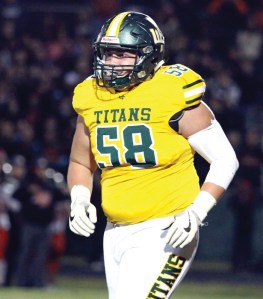 West Forsyth has had a history of sending football players to the All-Star Game.

“At West Forsyth we’ve been known for a lot of different things,” Snow said. “We’ve had guys be real successful and move on. You know, you get to go to all-star games. This is a good one because it’s so cool because of it’s right here in town. You get to go and enjoy it, and it’s a good thing.”

Snow said that he likes to mix it up on how he tells his players that they’d been selected for the All-Star Game.

“We do a lot of different things just to make sure they know that they mean a lot to us,” he said. “We’re not going to deal with them just because they’ve been there four years and we’re going to be done with them. We’re going to try to help them beyond West Forsyth and West Forsyth football. So it’s just a cool thing to see them get to go play in these games. They’ll do a great job.”

Marzano has come a long way since he started at West Forsyth. He was born in Charlotte and he played hockey until the last year and a half. He’d never played football until his freshman year on the JV team for the Titans.

“I can say this honestly, these were the best four years of my life so far,” he said. “The brotherhood was amazing. I played hockey before this since I was 4 years old. I had an idea of team sports, but I’m telling you there’s nothing like football — the amount of guys on one team, in the locker room. You can connect with so many different people, so many different backgrounds.

Marzano said he fell in love with football after beginning his career as a tight end before moving him to offensive guard. He also had the opportunity to play side-by-side with left tackle Jared Wilson, who is 6-4, 335 pounds and has signed with Georgia.

A group of seven players have bonded like brothers at West Forsyth — Marzano, Hill, Jordan Kennedy, Justin Borja, Mack David, David Pegram and Chris Van Kleeck — on and off the field at West Forsyth.

“That kind of like brotherhood that we have just made it just made so much of a special moment,” Hill said. “It was really cool just because of what we’ve been through together.”

“They freaked out,” Jake Hill said. “They might’ve been a little more excited than I was. Probably telling my (maternal) grandpa (Charlie Doss) was the most cool thing for me because I’m pretty close with my grandpa. He’s kind of like my role model. He’s like really the reason that I played football.

“And I called him and he started crying on the phone. It made me cry.”

Hill not only has the West Forsyth connection with his father and mother. He has it with his sister, Caitlin, who graduated from West Forsyth in 2016. She played both girls soccer and softball for the Titans. She also made the East-West All-Star Game for soccer five years ago.

“I wouldn’t say it was something we bonded over,” Jake Hill said. “It was more like, who was going to do better in their East-West All-Star Game. Me and her are super-competitive because she’s the oldest and I’m the youngest. So we kind of butt heads a lot.

All the players from both the East and West teams in the All-Star Game will meet in Greensboro the weekend before the game, and they’ll follow that was some practices before that game on that Wednesday night.

“It’s fun,” Snow said. “You get to watch them do it one more time. It’s fun. There’s no doubt about it. The cool thing about it is, it’s right down the road. It’s easy to go watch practice. You get to get up in the morning and go check them out, watch what they get they get to do, and watch who’s doing the right thing. Those guys will.

“It’s just neat to kind of go watch the process and get to see them play one more time.”

For both Marzano and Hill, it might be their last football game, period. Following graduation next month, Marzano will be going to Forsyth Tech to pursue a career in welding, and Hill will go to Cape Fear Community College in Wilmington, which also doesn’t have football. After a year at Cape Fear, Hill hopes to transfer to Western Carolina in Cullowhee in hopes of walking on as punter.

“It’s an achievement that I played four years of high school football, and I made the most of it,” Hill said.

Playing with Marzano is icing on the cake.

“Me and Carter, we actually weren’t really tight our freshman year. And sophomore year, I told him I needed a place to stay,” Hill said. “He was the first person that was like, ‘You’re coming to my house.’ I’ve been grateful ever since. He has saved my life in ways that he will never understand.”

For these two brothers at arms it’s fitting that they get to go out together.

“It’s kind of weird thinking about it,” Marzano said. “Freshman year, it was my first year coming in, I never would’ve thought I would’ve made it to this point. Now I’m a senior and going to play in the All-Star Game with one of my good buddies. It is, it’s breathtaking that this is happening.”