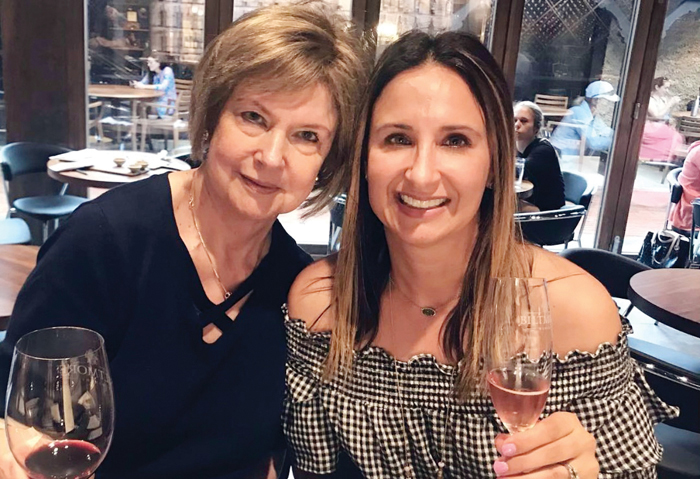 Lauren Tolley with her mother, Carolyn Wandscher, on a trip to the Biltmore.

Lauren Tolley grew up in Raleigh as an only child in a family that placed an emphasis on friendships and hard work. From a young age, Tolley’s dad would coach her softball teams, and her mom would support her cheerleading passion by taking her to all her training and competitions. “My parents got divorced when I was 17 years old, and at that time my mom and I got even closer. I remember the first Christmas after they divorced my mom took me to the Biltmore and we had the most amazing trip. She made sure that it was extra meaningful and pulled out all of the stops so new traditions could form. The Biltmore became a special place to the two of us every year afterwards,” explains Tolley.

When it was Tolley’s turn to choose where to go to college she initially chose Appalachian State University in Boone. “I was interested in industrial organizational psychology and wanted to establish a career in human resources,” notes Tolley. She realized after living in Boone she wanted to change gears and head back to more of a city life in Charlotte and finished her degree at the University of North Carolina at Charlotte. Tolley’s move for college turned out to be fateful personally too. She met Derek, her future husband, her senior year of college, and they hit it off instantly. “When I graduated, I immediately went to work in human resources at Bank of America in Charlotte and then for Keebler. I acquired really hands-on working knowledge of what I had studied while in school during that time,” explains Tolley.

Derek and Lauren decided to move to the Winston-Salem area after several years working in Charlotte. Tolley began searching for different jobs and ended up working in the guidance department of a school for two years before they decided to expand their family with their son, Wyatt, in 2010 and daughter, Reagan, in 2012. A year later, Derek and Lauren decided to open their own business, Safe Haven. “Derek had done extensive work in humane bird and wildlife removal, and at that time was in the process of patenting his netting tools that allowed the animals to be extracted without harming them,” says Tolley. “It made sense for us to start our own business and make sure that stores and companies had an option that allowed for humane bird removal that was also cost effective.” Tolley became the chief financial officer for Save Haven in 2013 when it began. Derek praises his wife’s contributions to growing their business. “Lauren put together our business processes, interior operations, manages our payroll and corporate taxes,” says a grateful Derek. “Lauren has helped us become the leading company for humane bird removal in the country. We’ve grown 500% and now have a presence in all 50 states.” Tolley credits his wife’s attention to detail and human resources background for helping them secure three patents on their products.

With business booming, and raising Reagan and Wyatt, Tolley was taken aback when her mother and close confidant developed cancer several years ago. “She had the most positive attitude about beating it. She tried everything to overcome it. We never even had those serious talks that many people have when they are fearing death because that would mean she accepted that she might die. When she passed after fighting cancer, it was devastating. I spread her ashes at the Biltmore where we had so many treasured memories from our frequent trips,” recalls Tolley. Her friendships have helped her move forward and honor her mom’s memory by living life to its fullest. “My friendships are very important to me. I’ve been lucky to have amazing friends that have been there for me. We like to work out together regularly, go to dinners, and take trips. It’s very fulfilling to have people in your life that care about you like family,” says Tolley.

Tolley also was recently able to see her father for the first time in a year and half because of COVID-19. “It was hard not to be able to see him because of the pandemic. He’s a fantastic cook, and whenever he comes over, we like to make things from scratch together. No one comes close to making his marinara sauce for spaghetti, and we missed making those memories together,” reflects Tolley.

Through the bumps and hard times in life, Tolley finds that what does sustain her is family, friendships, and the fruits of her hard work. Tolley knows that prioritizing who is most important that much joy is found.