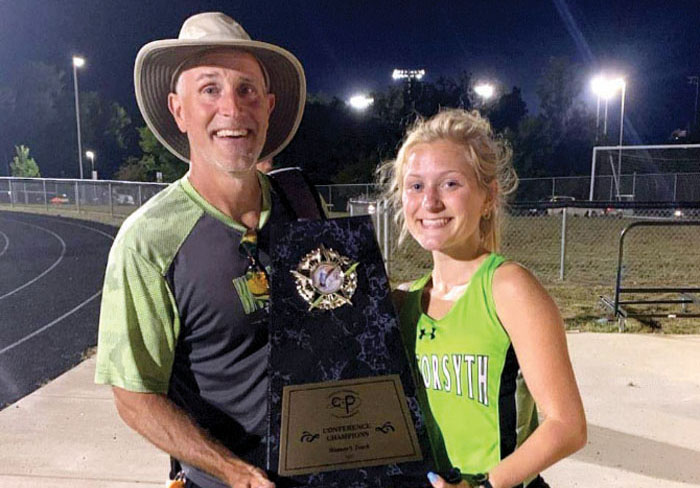 Getting to spend time with your family is a precious thing.

That’s no more evident than on the West Forsyth track team where Coach Nathan Newsome gets to coach his daughter, Blair.

Not only that, Nathan also had a chance to coach his other daughter, Mackenzie, before she graduated from West Forsyth in 2015, and he coached his son, Brock, until he graduated in 2019.

“Somebody asked me about it, and I said, ‘I’ve been lucky in my children have had an interest in doing the sport that I coach'” Nathan said. “Early in my coaching career, before I had children, I coached football and wrestling and track and field, was what I first started out doing.

“Had I continued that, I’ve always felt for my fellow coaches that have children, they don’t get to see them compete because they’re busy coaching their own, their other sports. For a lot of coaches, they end up foregoing coaching just so they can watch their kids be kids. So, I feel lucky that I’ve got to continue coaching, which I really enjoy, and to have my children compete in the same field.”

Nathan went a step further in describing the relationship between coaching and coaching his children.

“And on top of that, experience some success,” he said. “So that’s all been pretty cool.”

“It seemed weird at first, but watching my siblings have my dad as a coach, as well, made it not seem as odd,” Blair said. “I think it’s nice having him around, but it can make things extra stressful at times.”

Blair knew that she would be likely be scrutinized because she is the coach’s daughter.

“It’s been both an advantage and a disadvantage,” she said. “At practice it’s been really nice because I have somebody there if something goes wrong, but it can also be stressful because I feel extra pressure sometimes during workouts or whatever.

“It’s really nice on race day and stuff because he goes to each kid and gives them their little pre-race pep talk. It’s also nice having my dad give me my pep talk, and not just my coach.”

Not only are Nathan and Blair father and daughter, and coach and player, Nathan is an art teacher at West Forsyth and has taught Blair each of her three years in high school.

“In practice, and class and stuff at school he’s my coach or my teacher,” Blair said. “And it’s just kind of just an unspoken rule. We just kind of know. I do call him ‘Dad’ at practice sometimes. And it’s just out of habit, but he treats me just like everybody else.”

As difficult as it is, both the parent and the child know there are differences between a parent, teacher and coach versus a child, student or athlete in a particular sport.

“As a teacher or a coach, whatever the skill is that you’re trying to develop, you try to help direct kids toward their strengths,” Nathan said. “I used to think that you focus more on their weaknesses, but I have learned that you get more results when you try to amplify what they’re already good at.”

One wrench into teacher versus student has happened since last year when COVID-19 disrupted school. Nathan has still been teaching art, but Blair has been doing most of classroom work virtually this school year.

“Some people are scared of him, which they shouldn’t be,” Blair said. “It’s not that bad having in all three (father, teacher, coach). It’s kind of cool having him at home. He can critique my artwork and help me with it. And we can talk about practice schedules and workouts, and what we’re going to do, and how we’re going to plan those.

“So, it’s really cool to actually have him as all three.”

In addition to Mackenzie, Brock and Blair, Nathan, who graduated from West Forsyth in 1989, and his wife, Amy, who is a family and consumer sciences teacher at West Forsyth, have another daughter, Hope, who is 12.

“It’s convenient,” Nathan said. “Oddly enough, we don’t carpool. I’m coaching and always have to come and go at different times. Sometimes the kids will ride with me back and forth. But there’s many times where there’s three Newsome cars at the school. You might think, ‘Why don’t y’all ride together?’

“You know, everybody has their own schedules, but for it’s nice because I get to, a lot of times I get to go eat lunch with Amy and talk, or if I need her, I can swing by and say, ‘Hey.'”

As far as being his children’s coach, father knows best.

Genetics have also helped the children. It just so happens that in addition to Blair running cross-country for the Titans, she also runs the 800-meter, 1600, 4×400, and sometimes the 4×800.

Despite this being the last week of the regular season, the Central Piedmont 4-A meet was held two weeks ago at Davie County. The West Forsyth girls surged past Reagan to win the meet.

“It was stressful,” Blair said. “I’ve never been in those shoes before where I really made a big impact. We ran what we were supposed to run. And I tripled, so I ran the 16(00), and 800, and the 4×4, which was really difficult, especially in the weather conditions. I think we all stayed on top of it and kind of worked together to stay positive and hydrated.”

The conference meet ended late, which led to an interesting way to celebrate.

“And over the intercom, they said, ‘Can we have somebody, a representative from West Forsyth come over to the field house. And I was like, ‘Dad, is this the field house? Because we were standing right beside it.

“He was like, ‘Yeah.’ And the dude walks up and hands me a trophy. And I was so excited.”

Because there was lightning in the area, the crowd had thinned, making for a small group to celebrate.

“On one hand, there’s no pressure,” Nathan said. “Now the kids can compete where they’re just focusing in on what we want to enter our time in, and what not. I’m just trying to find the bright side.”

West Forsyth competed this past Monday in the Last Chance Meet and will have until next weekend to prepare for the NCHSAA Class 4-A Midwest Regional. The Midwest Regional will be June 18 at Davie County.

“I’ve run the virtual meet,” Nathan said. “If I ran everybody in all their events, and maxed them out, we would need a little bit of luck, but we would have a chance.”

“I think we have a good shot at regionals,” she said. “There’s going to be some close competition, but I think if our girls can work hard and do what we’ve already done, we can probably get second or third.”

One fly in the ointment is that Blair won’t be available to compete in the NCHSAA Class 4-A state meet on June 25 at Truist Stadium at N.C. A&T in Greensboro. Blair has been accepted to Governor’s School of North Carolina in Art at Meredith College in Raleigh, which starts on June 20.

“‘I’ve taught art for 25 years, and I’ve never had a student get Governor’s School,” Nathan said.

Nathan sat down with Blair to discuss her options.

“We loaded up the 4×8, and she split the second fastest time on the team,” he said. “And we ran 10-flat, which was tied for second in. the region, and probably one of the top eight times in the state. I though, ooh, yeah, we’ll probably do a little bit better than that, too, So, I thought, well I thought, ‘There’s a pretty good chance you’re going to make it to the state championship.’

“I said, but, ‘That’s why we have alternates.’ You know, Blair has been an alternate before for cross-country. And she’s in the role. Of course, I would much rather for her to be able to do both, but we’re under the understanding that the Governor’s School is a pretty rare opportunity that you can only do your junior year.”

There is a silver lining.

“We’re under the premise, that hey, ‘You’ll get to do that next year,” Nathan said.

Despite the bitter pill to swallow, Blair realizes the opportunity she has in front of her.

“It was a difficult decision to make,” she said. “In the long run, Governor’s School will make a bigger impact.”