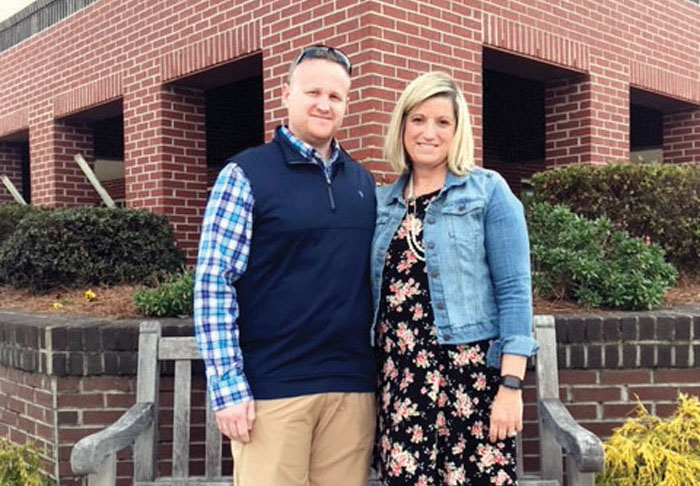 Lisa Brennan grew up in Adrian, Michigan, as the oldest of two siblings. “My family enjoyed traveling and staying active in our community,” recalls Brennan. “I swam in the summers and enjoyed participating in the band, color guard, and symphony during middle and high school.”

In high school, Brennan met her future husband, Matt, who was just a grade ahead of her. “His best friend and my best friend were siblings, so we naturally gravitated towards each other,” explains Brennan. “When it came time to decide where to go to college, I had initially thought I wanted to study marine biology, however, that program would have put me further away from Matt. I wanted to stay near him. I had also been interested in marketing and public relations and chose to go to Grand Valley State University in Grand Rapids, Michigan.” After Brennan graduated with a marketing and public relations degree, she and Matt were married four months later. “I immediately began working in advertising for a tier 1 auto supplier in Detroit, Michigan. I stayed with the company until we had our first child, Madison (now 11) four years after getting married. It was nice for Matt and I to have some time to just ourselves before expanding our family,” recalls Brenann. The stay-at-home mom added son, Colin (now 8) to the family three years later and a geographical change for them too. “Matt’s commute while we lived in Michigan was really long. He was recruited by Collins Aerospace (then B/E Aerospace) to come work in Winston-Salem, North Carolina. We decided to take a leap of faith and change directions completely since we would be leaving all of our family behind.”

The Brennans’ move turned out to be a very positive one for their family. “We of course missed all of our extended family terribly,” notes Brenann. “But the community in Clemmons was so welcoming to us. I began working at the Jerry Long YMCA in various capacities and it became like our family’s second home. I’ve now worked with them for almost eight years in aquatics (TYDE coach and water fitness) and now was a preschool teacher. I’ve also enjoyed participating in their fitness programs where I’ve met such a great group of moms that have become close friends.”

The confidence instilled from the professional and personal relationships made at the Jerry Long YMCA has encouraged Brennan to spread her wings in her career. In January 2020, Brennan started her own home decorating business. “I have always loved anything vintage, antiques and interior design so this is the perfect combination of my passions. I started Tobacco Leaf Farmtiques during COVID-19. It allowed me to have an artistic outlet during the pandemic. I hope to continue to build Tobacco Leaf Farmtiques to include local shows in addition to my booth and Etsy store,” explains Brennan.

Brennan decided to take her love for making someone’s space unique by getting her real estate license. Brennan starts real estate school next week and plans to be licensed by the end of the summer. “I love this area and working with people. It seemed like a really natural fit,” says Brennan.

Brennan is grateful for the support she has also gotten from Matt and her children for her creative career choices. “Being a mom is everything to me. I need to have a career that allows me to be there for them. I love watching them participate in activities they enjoy like swimming and golf. I am involved in the parent teacher association at their school and chair the annual book fair too. I don’t want to miss anything that is important to them,” says Brennan. “I’m lucky to be in a community that allows me to do that, and still follow my own passions.”