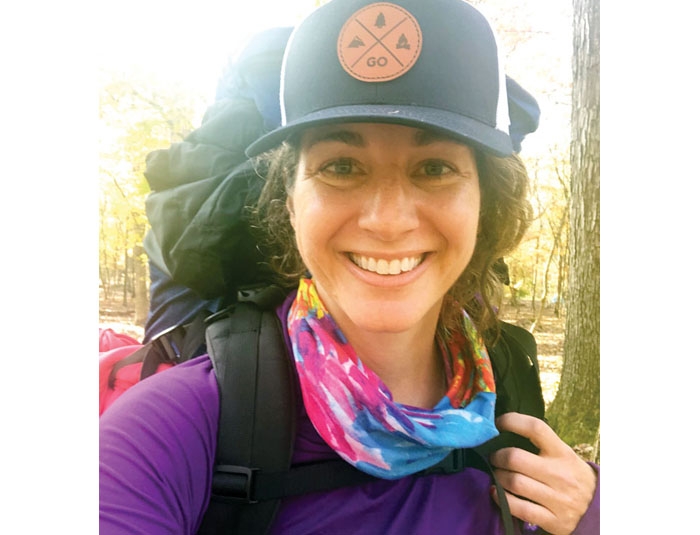 Kim Wilson spent her childhood as the youngest of two sisters in Harlan, Kentucky. Early on, she naturally gravitated towards hiking, and the comfort the outdoors provided her. “I also enjoyed being active in sports. I played tennis, ran track and cross country, and was involved in cheerleading. Luckily when you live in a town with a small population of less than 2,000 and schools that aren’t large, you’re able to play anything that’s available,” laughs Wilson.

However, having grown up in an environment where everyone knows your name didn’t appeal to Wilson for college. “I headed to the University of Kentucky for college to earn my degree in social work and minored in psychology,” mentions Wilson. She initially believed she wanted to focus on helping women in domestic violence situations. She was even proactive enough to seek and be awarded a two-year grant for her junior and senior years of her undergraduate program on the issue. When Wilson graduated magna cum laude in 2002, she began working as a case manager with Child Protective Services. “I performed initial assessments, family assessments, monitored clients’ progress and evaluated their case plan. At the age of 22, I saw what humanity had the potential to be like. It was hard to process a lot of what I was exposed to in many situations,” explains Wilson.

Wilson was still very compelled to help others, although it would take an alternate objective. “A friend of mine in the legal system had recommended me for a clinical research coordinator position in the Department of Neurology at the University of Kentucky. I worked there for almost three years, participating in an ongoing National Institute of Health funded clinical studies assessing Alzheimer’s disease,” says Wilson. She was part of a team that used various modalities of magnetic resonance imaging to further their understanding and research of the disease tendencies.

Wilson discovered that her enthusiasm for learning more about the why behind the brain was intriguing to her, especially in older adults. She embarked on various research positions while going back to graduate school to obtain her master of social work. “I realized that if I wanted to help people in counseling one day that I would need more training,” reflects Wilson. She graduated summa cum laude from the University of Toledo in 2009. “It was really busy during graduate school both inside and outside of the classroom,” says Wilson. She facilitated graduate research studies in areas of social work, epilepsy, and multiple sclerosis, and continued her work with Alzheimer’s disease. “It was a very demanding time, and I had a thirst for learning and understanding more,” explains Wilson.

With her new training under her belt, Wilson accepted a research position traveling frequently to assess the effects of combat-related posttraumatic psychopathology and post combat adjustment for members of the National Guard. “I’d travel frequently to conduct health interviews for military service members and developed assessments,” notes Wilson. During the end of Wilson’s third year of work with veterans, she learned that she was pregnant with her oldest, Eli (10). “Once Eli was born, I knew that it would be too challenging to continue with my position because of the frequent trips. I moved to the Winston-Salem area at that time too, and decided to be a full time mom,” says Wilson. She gave Eli a brother, Ben (8) just two years after he was born. “I’m so glad I was able to stay home with them while they were younger. During that time, I became active in various volunteer roles with Meals on Wheels and Children of Vietnam,” describes Wilson.

Once Wilson’s youngest began kindergarten she resumed her professional career. “For several years I was the intake coordinator for Wake Forest Baptist Health’s Memory Counseling Program. I counseled individuals with Alzheimer’s or other forms of dementia and also their family members. What I have always appreciated about individuals who experience these cognitive impairments is the wealth of life experiences they still have,” elucidates Wilson.

Wilson decided during the pandemic, that she would finally take a step that would allow her to combine her years of experience and allow her a bit more flexibility with her sons. “I opened up my own private practice, Kim Wilson MSW, LCSW. I help older adults face new phases of life that are challenging and disconcerting,” discloses Wilson. Her open-hearted and compassionate perspective allows her clients to feel empathy while sorting through complex emotions free of judgement. “I recently completed training on Eye Movement Desensitization and Reprocessing (EMDR). It was career changing for me. This effective psychotherapy method allows people to recover from trauma, depression, anxiety, PTSD, and other distressing life experiences. Most people have core beliefs about themselves, and this allows them to help declutter them — for instance not being good enough, needing to be in control, or feeling trapped to name a few,” enlightens Wilson.

Wilson still recognizes the importance of finding time to allow for some self-care with herself. “I realized during the pandemic how much I loved hiking and backpacking again. I could safely go with friends and reconnect on these explorations. I surprised myself by even backpacking in the snow at Grandfather Mountain this past winter. It was freezing but yet reinvigorating, and it was probably during these adventures that I built up the courage to start my own private practice,” reflects Wilson.

As Wilson continues to challenge herself, change others’ lives for the better with her profession and philanthropy, and observe her two sons growing into their personalities she feels confident she’s on the path that she was meant to discover.