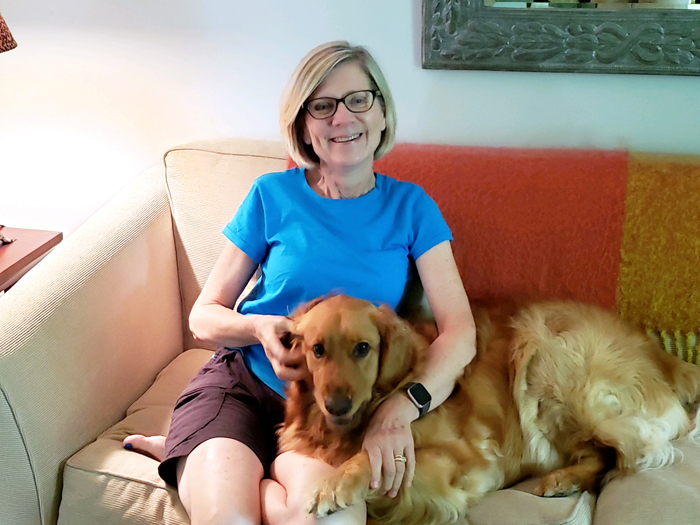 Kathy Giff grew up in Raleigh with a very close family which included a younger brother and many neighborhood friends. The idyllic childhood provided a framework of what she would want one day for her children and family. “We played outside and went to each other’s homes, and it was a great time,” recalls Giff. Being around kids, friends, and family was invigorating to Giff, but also the bond she shared with animals was important too. “My father was a vet, and I loved being around all animals as a child. I still do,” reflects Giff.

When Giff had to decide where to attend college she chose Furman University to study studio arts and psychology. “Back then you could tailor your major a bit and I gravitated towards art therapy,” explains Giff. “I really enjoyed my time in Greenville, South Carolina, but after I graduated, I decided to move back to Chapel Hill to be close to my family.” Giff began working in retail for the next five years as a young college graduate. “In 1985, I was still single, and decided to move to the Winston-Salem area to work at a store that has since closed, Shop of the Ragpickers. I was offered the job through someone I knew,” says Giff. Her move would be fruitful personally too. She met her future husband, Brian, and they were married in 1988. “We actually met at the YMCA of all places,” laughs Giff. “The timing was right for both of us. His dad had told him not to get married until he was 30, and ironically, he followed that advice by just a month. It’s now become a tradition in our family. Even our oldest son, Patrick (29) who is now engaged and going to be married.”

As Brian and Kathy began their lives together, they both agreed that expanding their family was important to them. Patrick was given a younger brother, Kevin (26) just a couple of years later. “At that time, I decided to be a full-time mom once Patrick was born. I was fortunate to raise my children in Clemmons West where I got to be a cul-de-sac mom with tons of adopted sons and daughters that came in and out of our home much like my childhood. Everyone knew that our doors were always open whether they wanted to play for just a bit, or if a parent had to go somewhere, we loved having children around,” says Giff.

When Kevin was in first grade, Giff began helping at Clemmons United Methodist Church Preschool. “Initially I was subbing for them, and not too long after I ended up with a 3-year-old class of all boys and one girl. I moved from being a part-time preschool teacher to teaching five days a week. I embraced my evolving roles which included being an art teacher as well. I also became a part-time children’s minister. Once I was asked to become full time in that position, I had to completely stop teaching preschool. I fulfilled that role for 15 years,” notes Giff. “My role at Clemmons United Methodist is now working with adults to figure out where they are best meant to serve in the church and community. Everyone has such different talents and gifts, it’s fun to help them learn where to best utilize them. I’ve always had the desire to develop leaders, even with children’s ministries it’s neat to see the growth. The children are especially forgiving of different behaviors and traits when working with others in their roles such as vacation Bible school.”

The Discipleship, Equipping Ministries and Missions coordinator has a four-legged friend helping her in her role with the church “I have brought my golden retriever, Gracie, with me many times. She’s a church dog and grew up in the preschool. I’ve always thought of her as an unofficial therapy dog. Whenever she’s around, people gravitate towards her and come out of their shell. I think animals can be of comfort to us humans,” explains Giff. “You can judge people’s character by how they treat animals. During COVID-19 she was my constant companion.”

Giff is one of many who is glad to see life resuming to a bit of normalcy. “One of my love languages is getting to hug people. It’s been nice to start doing that again. I’ve never been one that needs titles and positions to make a difference. I’ve always wanted to just leave a smile on people’s faces,” reflects Giff. She is looking forward to leaving a big smile on her mother’s face this weekend with family. “We are actually celebrating my mom’s 90th birthday, and she is well-loved in the community so there will be a party in her honor. We’re excited to celebrate it her, and my brother will be coming into town as well,” says Giff. “I’ve always admired how my mom sends cards to others to let them know she’s thinking of them, celebrating their occasions, and supporting them through difficult times too. That human connection is so important in life.”