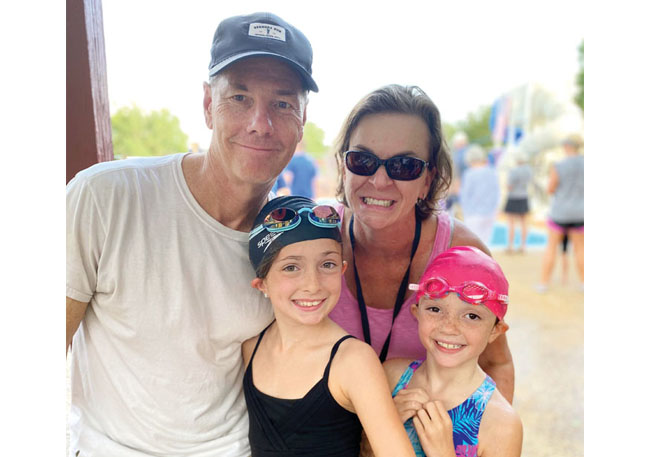 Melissa Kelly and her husband, Chris Lane, Kenzie Lane and Sierra Lane while they support their daughters at a Bermuda Run Swim meet.

Melissa Kelly grew up in Greensboro as the oldest of two siblings. As a young kid, Kelly discovered the fun and benefit to sports and health. “As I was growing up, my parents had me attempt different sports. I tried dance, soccer, and then running really became my thing. My P.E. teacher in middle school, Diane Smith, told me to try out for the track team. I did and distance running really was my passion. I stuck with it in high school too,” reflects Kelly. Her natural ability coupled with her work ethic allowed her to compete and earn a spot on the Junior Olympic Track and Field Team. “I loved competing and being part of a team,” says Kelly who even qualified for nationals.

The standout athlete was set to run at the University of North Carolina at Greensboro and began training with them. “Ultimately, after my first year I decided I wanted to focus on chemistry and biochemistry and transferred to North Carolina State University (NCSU). At that point, academics became my main focus, although I still ran for fun and exercise,” explains Kelly. After a year at NCSU, Kelly realized that she wanted to get her degree in nutrition and completed her courses at UNC-G. Kelly completed her bachelor of science degree in human nutrition and her bachelor of arts degree in biology. “I loved nutrition and liked the idea of learning how different antioxidant compounds affected and damaged your DNA, so I got my PhD in human nutrition science also at UNC-G,” notes Kelly. “After completing my academic work, I was ready to translate science into marketing and educating consumers. I had spent several years working as a research assistant while earning my PhD and thought what a great opportunity to apply what I had learned to help animals. I was offered a position at Nestle Purina Petcare and have been there almost 21 years.”

Kelly’s time at Nestle Purina Petcare afforded her many opportunities from being on the corporate team that traveled globally and having flexibility with telework. “I initially was based in the Midwest since it was head quartered in St. Louis, Missouri,” reveals Kelly. “I was fortunate enough to travel all over and frequently to continue with my work. Science is amazing. It was fascinating to see strides in producing products that really improved and changed the lives of animals. For instance, dogs that took probiotics would aid in calming them in stressful situations because it assisted their nervous system. Senior dogs with dementia and other cognitive problems could have certain ingredients given to them to maintain loss instead of it continuing to consistently worsen. Everyone at my work loves their pets and were bringing them to work with them. That type of environment was very conducive to inspiring you to be and do your best.”

It was because Kelly worked in an environment that had flexibility and understanding that she was able to move back from the Midwest to Greensboro after several years. “When my brother had his twins, I knew that I wanted to be a part of their lives. I was so glad to be able to continue in my role as the senior principal nutritionist at Nestle Purina Petcare and live near my family,” says Kelly. “It wasn’t too long after I moved back home that I met my future husband, Chris Lane, in 2007. I had continued running and we met through a group of folks who trained with us.” Kelly had multiple benefits from continuing her love of running. Finding her husband who shared her passion for the sport was a big plus. “We got married on my birthday when I was 36. Chris and I still do races for fun together after all this time. We’ve done the Marine Corps Marathon twice, one in Canada, really all over and it’s been such a neat experience to do it with him. Marathons and half marathons will always be a part of our way to stay connected and share our mutual interest,” explains Kelly.

Kelly and Lane didn’t slow down their runner’s pace too much when they decided to have daughters Kenzie (8) and Sierra (7). “Being a mom was humbling. I love them so much, and each day is a new adventure,” reflects Kelly. “Sawyer (26), my step-son is obviously at a much different stage in life, but it’s taught me how much each part of it goes by so quickly.”

As Kelly enjoys balancing her passion for science and improving what people know, raising her family, and taking some miles for herself, she feels fortunate that each step continues to put her in the right direction.