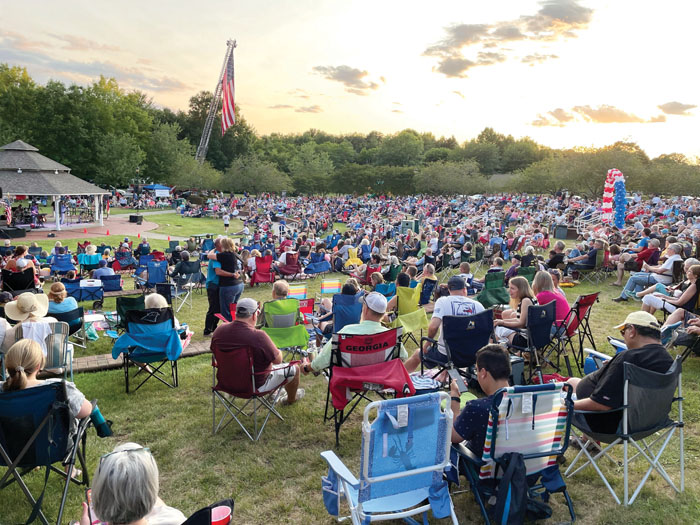 A large crowd packed Shallowfield Square for a July 3 concert, which is one of 10 on the busy 2021 schedule in Lewisville. Photo by Jim Buice, for the Clemmons Courier

Events coordinator gets busy at the beach, in the hospital to book bands

An already planned vacation at the beach, followed by an unexpected overnight stay in a hospital, didn’t stop Stacy Howard from putting together perhaps the best-ever concert schedule at Shallowford Square for 2021.

Howard, the special events coordinator for the Town of Lewisville, got a call on the way to the coast in May that the governor’s order on restrictions regarding mass gatherings outside was being lifted — and she knew it was time to get busy.

“I started thinking to myself that all the good bands are going to get booked if I don’t start doing something immediately,” Howard said. “Luckily, I had my laptop and iPad with me, and of course cellphone, and I kind of set up office from down there and stated booking.

“I’ll take even one step further. On my way back, I had already scheduled the Memorial Day concert (The Embers) but also had lot of things to take care of, and I’ll will be darned if I didn’t end up having a mini-stroke on the way back from the beach, so I was in the hospital for a night down at Little River. I felt fine, and they got everything under control, but I had my iPad, and I was literally booking bands in my hospital bed.”

Following the Memorial Day concert was a June performance with On The Border Ultimate Eagles Tribute Band that also featured another “packed” house, but Saturday night’s Chicago Rewired — The Premier Chicago Tribute Band and REO Survivor Tribute Band concert drew the largest gathering yet on a beautiful night just before Independence Day.

Mayor Mike Horn’s unofficial crowd estimate was 2,200 for the July 3 show, which included the Lewisville Fire Department hoisting a large U.S. flag and American Legion Post 522 presenting the colors and the Pledge of Allegiance before the playing of the Star-Spangled Banner.

“With the governor’s orders lifted, people have just wanted to get out of the house so badly,” Howard said.

Of course, last year was silent with the global pandemic, and when there wasn’t enough time to plan an outdoor play this year with the continuing restrictions, Howard said that freed up additional funds to offer more concerts. “This has given is more events than we’ve ever had before,” she said.

There are 10 concerts on the docket, in addition to the usual slate of movie nights and other activities. The schedule in July through September features concerts every other Saturday night: July 17 (“Slippery When Wet” — The Ultimate Bon Jovi Tribute Band), July 31 (The Catalinas), Aug. 14 (The British Invaders Band) and Aug. 28 (Jukebox Rehab), Sept. 11 (The Legacy Motown Revue) and Sept. 25 (Triad By Fire — Journey Tribute Band).

“We have a lot of different acts and have tried to offer a lot of variety,” said Howard, a longtime songwriter who has claimed her share of honors and awards over the years.

Howard also serves as office manager for the Town of Lewisville.

“We didn’t require her to do this on her own time,” Town Manager Hank Perkins said of the unique scheduling this year. “It just shows what a trouper she is. She did an awesome job doing what needed to be done. It was a big ask for her. She knows it’s a big part of Lewisville, and she was happy to do it.”

Perkins provided an update on the events in last Thursday night’s briefing and action meeting, which was the first “live” meeting for the town council since the shift to Zoom meetings after the arrival of COVID-19 last spring.

He also gave the most recent timeline for the start of the Gateway Project, stating that bids are due July 27 for the long-anticipated road improvement with a projected construction start in September.

The project covers the U.S. 421 interchange toward the bridge and through, and on Williams Road continuing between that interchange and the roundabout at Shallowford and Williams roads with a planted median being installed. Wider lanes in that segment will be provided to accommodate cars and bicycles along with curb and gutter, sidewalks, street lights and landscaping.

Perkins said that some objections were raised in the earlier stages of the project from those wanting a left-turn into the Circle K heading south from downtown before the roundabout at the bridge.

“The council pretty much and politely rejected that,” Perkins said. “They felt like keeping the traffic moving was important and then the proximity of the roundabout to go down and turn around in the roundabout and come back was so close that it wasn’t worth creating traffic conflicts.”

As for the upcoming construction, Perkins said that the traffic control plan calls for the road not to be closed but there may slowdowns during certain times of the day. However, he added that there are times in which the contractor will be required to not restrict traffic in “high-traffic areas the first thing in the morning, afternoon and school-time traffic.”