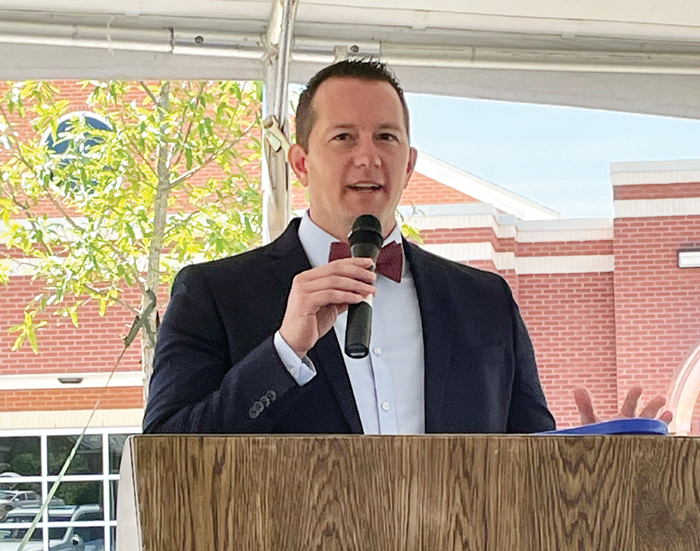 Photo by Jim Buice John Wait is stepping down as mayor of Clemmons after four years in office.

Clemmons will have a new mayor later this year as John Wait, who is in his second two-year term, has decided not to seek re-election in November’s municipal election.

Wait actually announced on Facebook well in advance of last Friday’s registration deadline that he would not be seeking another term. He said that returning to private law practice and family considerations led to his decision to step aside.

“I ran for this office three and a half years ago,” he said. “I had just transitioned to a new law firm and was still building up my practice. I had the capacity to serve as mayor and am thankful our voters chose me to lead. However, my hard work at my firm has paid off, and it is time for me to return to private practice and family life full time — especially now that (wife) Claire has her own business.”

Wait, a political newcomer when he was elected mayor for the first time, replaced Nick Nelson, who didn’t seek re-election in 2017. Wait held off a challenge that year from Larry Kirby, the longtime village public works director and later town manager who had more than 1,000 votes as a write-in candidate. Wait gained a second term with another victory over Kirby, who added his name to the ballot in 2019.

Wait said he expects “to still be involved with local politics in some form or capacity, and I’m open to serving again in the future. But right now, I think it’s time for someone else to take the reins.”

Barring something unforeseen, that will be Mike Rogers, who was elected to a four-year term as a member of the council in 2019 and was the only candidate to file for mayor in 2021.

“Yes, I have had some conversations concerning running for mayor,” Rogers said when asked if he had been considering this move for some time. “As you can see, I filed early after the filing period opened on the first day.”

That would have on been July 2 when the two-week filing period opened for all the N.C. municipal elections.

“As mayor, I will provide leadership for the continuation of goals and plans that previous councils have approved and further a new initiative for an environmental and sustainability committee for our community that the current council has discussed,” Rogers said. “This council has supported more stringent stormwater regulations to minimize the impact future developments have on existing residents while still maintaining property rights of land owners.

“We must continue the successes that previous leaders have provided for our village and ensure that we strive to repair and maintain our infrastructure, which in turn will result in a sustained strong economic environment for our businesses and stable home values for our citizens.”

Rogers served on the council for six years from 2011 to 2017 before being swept out of office with two other incumbents in 2017 as a result of an overriding issue — voters sided with a group of challengers (Michelle Barson, Scott Binkley and Pamela “P.J.” Lofland) who campaigned against a median on Lewisville-Clemmons Road — prior to being re-elected two years later.

Two others on the current council — Barson and Mary Cameron — filed to retain their spots. Barson was the top vote-getter in 2017 and is completing a four-year term. Cameron, who served six four-year terms and 24 consecutive years on the board before being part of the purge in 2017 along with Rogers and fellow incumbent Lanny Farmer, is completing a two-year term after winning re-election in 2019.

Cameron barely beat out Lofland for the final spot two years ago, and Lofland also filed in an attempt to regain her position on the council. Bradley Taylor joins Barson, Cameron and Lofland in the race for council seats.

In other municipal election filings, Mike Horn is running for a fourth consecutive two-year term as mayor in Lewisville.

Horn said he was very appreciative to the residents of Lewisville to be running unopposed as is the rest of the council.

“I believe the next two years will be so important to our town,” Horn said. “With the passage of the American Relief Act and the soon to pass American Infrastructure Act, we have opportunities for project funding that may occur only once in our lifetime.”

In addition, Lewisville will soon open the new Mary Alice Warren Community Center and the new Lewisville Middle School while construction for the new gateway project, including sidewalk and road enhancements, will be starting soon.

“These projects are the result of our current and many previous councils who shared a vision to keep Lewisville a wonderful small town in which to live and raise our families,” Horn said.

In Bermuda Run, current council members Mike Ernst and Ken Peacock have filed for re-election. Others who have filed include Mike Brannon, who is a regular at attendee of council meetings, former councilman Ed Coley (who left the board in 2017), and new resident Melinda Willis Szeliga.

Councilman Chris Fowler, who was elected in 2017, did not file for re-election. Current council members Curtis Capps and Heather Coleman were elected to four-year terms in 2019 as was Mayor Rick Cross.

Hanes Mall partners with The Salvation Army for Back-to-School…