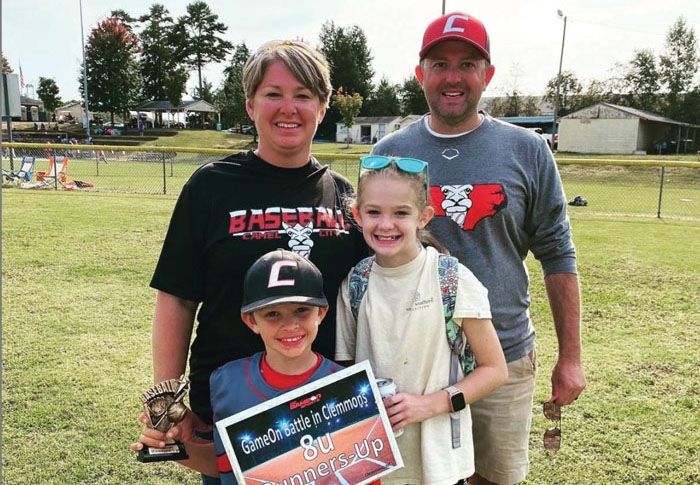 Ed Thutt, with wife, Amber, daughter, Morgan, and son, Carson at one of Carson's baseball games.

Ed Thutt was born in Winston-Salem but left at the young age of 2 for Kinston. His parents were both pharmacists and had a professional opportunity that they could not pass up in that area. “As a kid, science was always a big part of my life, and one that I enjoyed. I always recognized early on that I wanted to become a teacher. I had observed my dad teaching pharmacy law which is an obscure topic at the University of North Carolina at Chapel Hill. He had the talent of making a mundane subject very interesting and entertaining for his students. I knew then the path I would want to take for my career would be in education,” explains Thutt.

Thutt followed through on his childhood dream and headed to UNC and was awarded a spot in the competitive N.C. Teaching Fellows Program. “When I graduated, like most kids from Kinston, I wanted to get a job in Raleigh. I lived there right after graduation before I realized I wanted to get away from Raleigh because it felt like it was developing so much and getting too big. My godparents happened to know a principal in the Winston-Salem area that gave me an opportunity to teach seventh-grade science,” says Thutt. Within two years of accepting that job, Reagan High School was built and Thutt has been there ever since its inception. “I immediately began teaching in the science program and coached as well. Growing up, I never did many sports myself, but I view coaching as a different type of teaching, except the kids want to be in your classroom and don’t have to be,” says Thutt. “I fell in love with coaching and have really enjoyed it.” Thutt coached both the girls’ cross country and basketball teams when Reagan High School first began.

While Ed’s professional career was continuing down the path he had hoped, he also was fortuitous enough to have friends set him up with his future wife, Amber. “She was also a teacher and some of our mutual friends introduced us in 2004 and we were married in 2006,” remembers Thutt. The Thutts expanded their family with daughter, Morgan, in 2008 and their son, Carson, in 2012. As Thutt’s children began getting older and enjoying activities of their own, he began to realize his coaching days might be winding down at Reagan High School. “I didn’t want to miss my kids’ events and found another way to still be a part of the athletic program in a different capacity,” explains Thutt, who became the assistant athletic director at Reagan in 2007. “My primary job is team management. I make sure that the other teams know where to go and have what they need. If any problems arise, I also make sure that they get resolved. I am also the point of contact for referees and officials helping at the games,” notes Thutt. He also is the voice you might recognize at Reagan High School events, Wake Forest athletic games, and the Winston-Salem Dash as he helps as the public address announcer.

The extra time with his family has allowed Thutt to watch Carson’s travel baseball games and helped build Morgan’s in-home dance studio. “We stay pretty busy going to their activities and we enjoy supporting their passions,” says Thutt. He makes sure that he also takes time for his own passion of woodworking. “You know some guys like to play golf, I like to make things out of wood,” jokes Thutt. “I’ve made a lot of the furniture in our home. I also do commissioned pieces that has been primarily through word of mouth and referrals.” Thutt started an Instagram page to showcase his many pieces at @customwoodworkingbyedthutt that has cultivated quite a following. “I stayed especially busy during COVID-19,” reflects Thutt.

Thutt’s innovative ideas also transcend into the classroom. Known for his proactive measures in alternative energies, Thutt was awarded a grant two years ago to erect a 10-foot-tall solar charging station. “I know how much more meaningful it is to understand this topic if you can see it in action instead of just watching a video or reading about it. The kids are able to charge their cellphones and laptops while they are eating lunch or waiting for the bus,” explains Thutt. As an environmental science teacher, Thutt focuses his grant writing on getting more educational tools for Reagan focused on alternative energy. “I would love to get a miniature wind turbine on campus. We’ve got some areas on campus that get a fair amount of wind, but that’s another project for another day,” says Thutt.