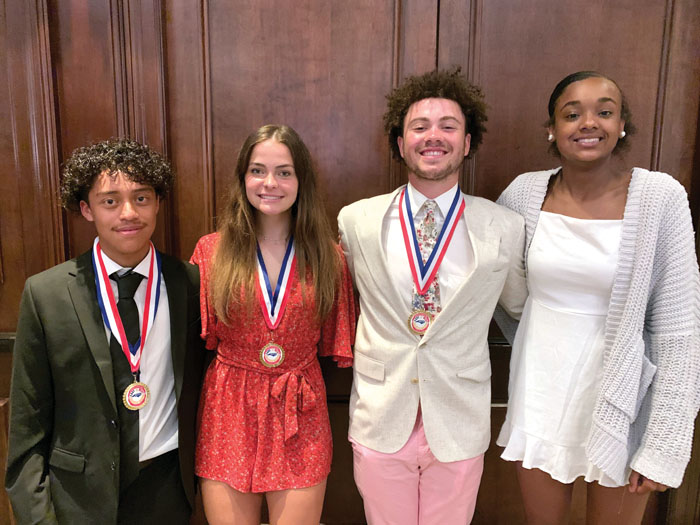 Four recently-graduated athletes from West Forsyth had one last chance last to play in a high school game last week at the East-West All-Star games in and around Greensboro.

The first game played was the girls all-star basketball game last Monday at Greensboro Coliseum. That gave Baskerville, who has signed to play at High Point University, a chance to show why she was named Central Piedmont 4-A girls player of the year this past season.

And she didn’t disappoint. She finished with 16 points and eight rebounds to help lead the West to an 87-66 win against the East.

“It was super-fun. I had never played in the Greensboro Coliseum before, so being in there and being as big as it was, I was surprised because I thought it would be a good experience because I had seen that the ACC Tournament was there too,” Baskerville said. “Playing on the same court was really cool.”

Baskerville, who played 26 minutes, said she had to adjust to the shooting background at such a large arena.

“When I first walked in, I was talking to my (West All-Star) teammate, Mariah (Frazier), I was like, ‘I’m used to their being like a wall behind the goal.’

“So, I was like, I’m hoping this doesn’t affect my shot because it was so much space behind it.”

Just like with any other sport players reported and met each other before having some practices. The basketball players met the Saturday before the Monday night games. Baskerville said they practiced twice the first day, once on the Sunday before the game, and had a shootaround the morning of the game.

“I actually ended up learning something from the first practice — like in our motion if somebody is dribbling toward you, you cut. And I didn’t know that before,” Baskerville said. “And I knew the practices were going to be fun, but I wasn’t expecting to go there and learn stuff, so that was really good.”

Baskerville even had a fish-out-of-water story to tell about being named to the East-West All-Star Game earlier this year.

“I was super-excited because when (former) Coach (Brittany) Cox (Hudson of West Forsyth) told me about the all-star game I had never heard of it,” Baskerville said. “I didn’t know what it was. So, I had been talking about it and then the day before I was just super-excited. I ended up leaving way earlier than I was supposed to that morning just to get there.”

It turns out that Baskerville confused the game in Greensboro last week to the Carolinas All-Star Basketball Classic that is normally held in the spring after the regular season is over. That game this year was canceled because of concerns over COVID-19.

“I was talking to Skyler (Curran, who is a former West Forsyth player and will be a senior this season as a teammate with Baskerville at High Point) in summer workouts. And I thought it was the game where like North Carolina played South Carolina. They hold it in Wilmington every year,” Baskerville said. “So, they were like, it’s in Greensboro. I was like, I didn’t know they had this all-star game. But after like going after I had seen it had been around for a while, I was like, ‘This is really cool.'”

Baskerville will report to High Point next month, but she already took one class and she’s been doing some workouts. In addition to Curran, who was named the Big South Player of the Year this past season, she’ll also have former teammate Callie Scheier playing at High Point as a junior.

“It’s helped me a lot personally because I roomed with Skyler in the summer,” Baskerville said. “And like any questions that I had, I could just ask her because she was right there. But they check on me a lot to make sure I’m good with everything. And me already knowing some people on the team when I got there made me a lot more comfortable.”

McGuirt will also report to college next month when she will travel to Pittsburgh to play at Carnegie Mellon. But she had a chance to represent West Forsyth last Tuesday at the East-West All-Star girls soccer game at Bryan Park in Browns Summit.

Not only did she play, she started as a defender.

“It was very exciting, and I was just honored to have that kind of position,” McGuirt said. “It was really cool.”

McGuirt played all but 11 minutes of the 80-minute game that finished in a 1-1 tie.

“Honestly, it felt like a high school game to me to be honest,” she said. “Like, it definitely, there was a lot of pressure to kind of play well because I am representing my school, and I was chosen for the game, so I felt like I had that pressure on my shoulders.

“But I think it went pretty well. I think the game ended up being 1-1, and I thought it was pretty fair result.”

In addition to starting, McGuirt was still on the field when the final buzzer sounded, ending her school career.

“I was definitely more said, I think, playing my last actual high school game,” she said. “But I think, I don’t know, I didn’t feel any different.”

McGuirt had plenty of support at the game from her family, including fraternal twin sister Victoria, as well as Coach Scott Bilton of West Forsyth.

“I think 10 members of my family were there, so it was cool,” she said. “And then I was nervous because I wanted to play well in front of those guys — happy that they were there.”

“It’s definitely going to be hard to adjust,” Avery said. “I was up there (Carnegie Mellon) the other weekend meeting all the girls and stuff. And after, I was up there four days, and on that fourth day you definitely realize how much like you miss your family.

“Also with my sister, I feel like she’s been with me since I was born, so it’s not something I like to think about. Just being separated is kind of sad.”

Guzman also had a chance to cap off his stellar career at West Forsyth with the all-star appearance last week in Macpherson Stadium at Browns Summit. He started at midfield and 64 minutes for the West, but the East won 3-2.

“It was fun meeting kids from across the state who were also able to play in the All-Star Game,” he said.

The players and coaches met the Sunday before the game the following Tuesday night. He also played in front of his family, friends, and Coach Jeffrey Williams from West Forsyth.

“I was a little bit nervous since there was a lot of people there,” Guzman said. “They were expecting a good performance from me.”

The West outshot the East 11-8, and Guzman finished with one shot.

Being able to represent West Forsyth one last time as a player was special to Guzman.

“I think I did the best I could in my high school career,” he said. “And I got to play in the All-Star Game my final game.”

Hill was a two-sport star as a football and basketball player at West Forsyth, but he capped his career last Wednesday in the East-West All-Star football game as defensive back at Jamieson Stadium at Grimsley High School in Greensboro.

Although it was special for Hill it didn’t start as well as he would’ve liked. Offensive lineman Carter Marzano of West Forsyth, and one Hill’s best friends, was selected for the game, but couldn’t attend because of having to work.

“It just kind of threw me off,” Hill said. “So, my head wasn’t all the way in it out there. But when I got there, it was just like being around a bunch of football guys again, so it was like a flip of the switch, I guess you could call it.”

After not playing football since early April, it was an adjustment to prepare.

“The game wasn’t all that bad, but that first practice that we had, it was pretty rough,” Hill said. “I’m not going to lie to you.”

Despite having not played in 31/2 months Hill said he was prepared.

“I wouldn’t call it nerves,” he said. “I would say more like butterflies like I was thinking so much about getting to know the team and go out a winner instead of going out with a loss.”

“It makes me feel good to know that the last football game I played in is going to be a ‘W’ in my book,” Hill said. “So, it’s a little better than thinking about losing to those people across the (Yadkin) River (lost to Davie County in the final game of the season).”

Many coaches from West Forsyth, including Coach Adrian Snow, were in attendance.

“After the game, it was awesome,” Hill said. “All of my coaches came to watch me play. I got to see all of them for the first time since football ended. So, I got to see them, and of us were happy because we won. Getting to go back to the locker room after a big win and have fun with your teammates, so you can’t ever go wrong with that.”

In addition to the West Forsyth football coaches being there, Hill had a big family contingency there. His father, Johnny, was the interim girls basketball coach this past season, his mother, Charla, is a math teacher at West Forsyth, his brother, Darius, and his sister, Catlin, were there. Caitlin played in the East-West All-Star girls soccer game in 2016.

“It was really cool to have my brother and sister there because my sister played in her East-West All-Star Game,” Jake Hill said. “It was cool to have her there because she normally doesn’t get to come because of school or work. So, it was awesome to just have them all there together and get to see them all after the game.”

Hill will attend Cape Fear Community College in Wilmington in the fall, but even though he’s putting football on hold for now, he realized the experience he and the other West Forsyth athletes just had last week in the East-West All-Star games.

“It did mean a lot,” he said. “Me and Shakira are probably closer than I am with the other two.

“We were talking and she was like, ‘It was crazy how we had four kids and all the other schools only had like two.’ And I was like, ‘Hey, I guess we’re doing something right.'”