‘Perfect Fit’: Bobby Ogburn’s family gets historic marker for Peter and Comfort Clemmons House along with a new owner 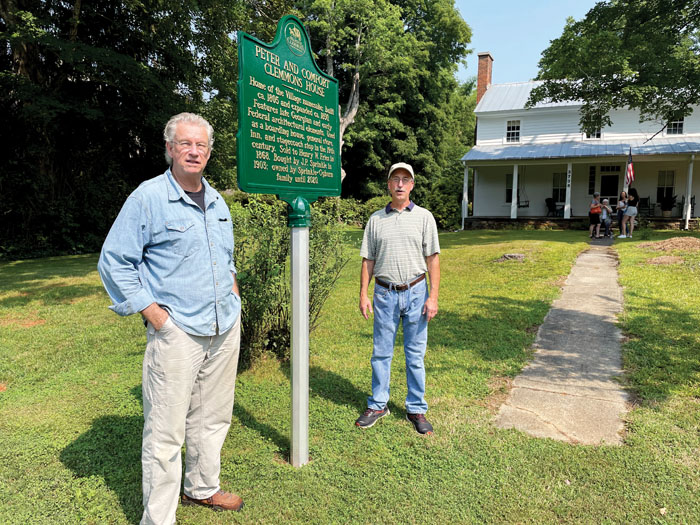 New owner Steven Marlow, left, and Bobby Ogburn, whose family lived in and took care of the Peter and Comfort Clemmons House for 117 years before selling it last year, stand beside the historic marker that was unveiled in front of the house at 3736 Clemmons Road last Wednesday morning. Photo by Jim Buice, for the Clemmons Courier.

Bobby Ogburn’s family owned the Peter and Comfort Clemmons House, which was built in 1805 along what is now U.S. 158, for more than 100 years until selling it last year. So he naturally thought it was worthy of having a historic marker.

“The house is 216 years old, and our family has lived in and taken care of this house for 117 years,” Ogburn said. “I’m very proud of that. This house has deserved that marker for a long time.”

And last Wednesday morning, the sign was unveiled during a special ceremony coordinated through the Village of Clemmons with Ogburn and new owner Steven Marlow, who is now restoring the interior of the 3,500-square-foot house, sharing in the removal of the covering.

“I want to start by saying thank you to Bobby,” said Clemmons Mayor John Wait. “None of this is possible if he hadn’t reached out to us asking for our assistance and input. It’s important to save these structures not just for the village but just generally for the community, Bobby’s family and for everyone to share.

“And to Steve, thanks for making the investment. I am excited to see what you’re going to do with it. This house with the (Philip) Hanes house just down the road, I think they are really good anchors for the community to remember our roots.”

Councilwoman Mary Cameron said: “Any time you can save a piece of history like this it’s rare and very special.”

Ted Guenther, Clemmons representative to the Forsyth County Historic Resources Commission, told the assembled gathering that the first historic markers were installed in 2001 throughout Forsyth County and that 60 markers have been placed to mark important places and events. 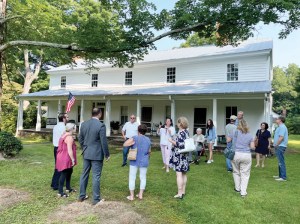 The crowd gathers in front of the Peter and Comfort Clemmons House prior to unveiling the historic marker. Photo by Jim Buice, for the Clemmons Courier.

Ogburn said he didn’t know about the process of getting something like this done and was very appreciative of all the help and contributions provided by Michelle McCullough and Heather Bratland of Forsyth County Historic Resources, Realtor Michael Ryan, Village Manager Scott Buffkin and the Village of Clemmons, the Clemmons Historical Society and Preservation Forsyth.

Ogburn added he thought it was noteworthy that his family had the house for longer than all the other occupants combined and that his great-grandfather, J.P. Sprinkle, who purchased the house in 1903, was a sawmill man and owned and operated Clemmons Lumber Co.

As for the new owner, Ogburn said he considered it to be a “perfect fit” because of Marlow’s deep passion for restoring historic homes.

“I grew up in a house very similar to this,” said Marlow, who resides in Florida. “It was a stagecoach inn in upstate New York called the Red Lion Inn and built in the late 1700s. I said this is the spitting image of the house I loved so much.”

It’s unlikely he would have ever discovered the house at 3736 Clemmons Road had he and his wife’s two daughters not decided to attend Wake Forest.

“Our daughters just graduated from Wake,” he said. “We camped some at Tanglewood and have been by this house the last four years, driving by there all the time after we saw it.”

And thinking… “The minute that comes up for sale, I’m going to snap it up, just by chance. One day I’m looking at Zillow and it had been on there for an hour, and I called my Realtor friend, Keith Bandy of Keller-Williams, and I said, ‘Keith, if you’re delivering the baby, drop the baby. Write a contract, find out who owns it, full-price offer, whatever the deal is.’ ”

Ogburn said he was surprised about getting an offer so quickly on that first day and later learned the details about why Marlow was so interested.

“They didn’t know about the inside,” Ogburn said. “You’re either wanting a historic home or you’re not. The exterior is in great shape.”

Marlow, who is a structural engineer and longtime general contractor, said he is planning to do most of the work himself and stripping it back to its originality.

“I have some great ideas, but it’s going to take some time,” said Marlow, who has put in all new utilities, a new sewer line and water line from the city, gas, wiring and a lot of foundation work.

The building summary says there are six bedrooms and just one bathroom, which apparently wasn’t added until the 1950s. There are also eight fireplaces.

“Depends on how you slice it up,” Marlowe said of the rooms. “There are seven bedrooms upstairs now and two full baths up there with another full bath downstairs. Now I have three baths. I started taking the old one out built in the ’50s.”

Although Ogburn no longer owns the property, he said there’s one piece of unfinished business he’d like to see completed.

As for the house itself, Ogburn knows it’s in good hands with Marlow.