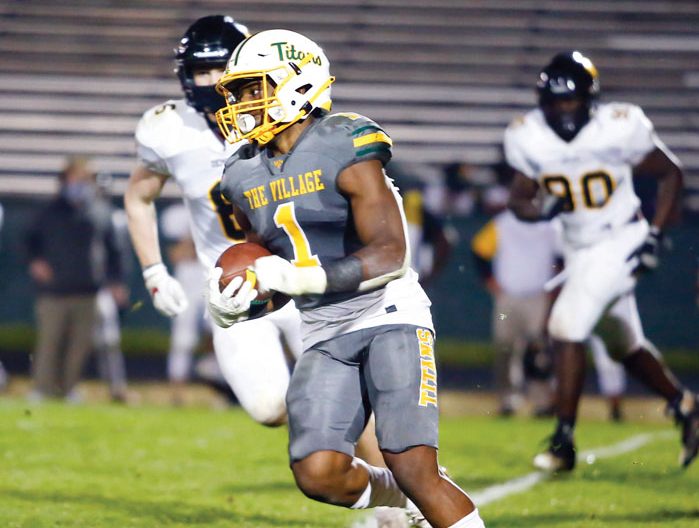 It seems like it was just yesterday when the West Forsyth football team last played.

Well, it was exactly yesterday, but because of COVID-19, last season was pushed to spring and the Titans last played on April 9. So, even though it’s been four months since their last game, no matter for the Titans and Coach Adrian Snow. It’s been business as usual this past offseason as it prepares for the fall season.

That preparation began this past Monday for the Titans and all of the other teams in the NCHSAA across the state, as they started official practices in preparation for their first games, which are scheduled for Aug. 20.

“We treated it just like a normal summer,” Snow said. “We got back in there and got back to work, and here we are.”

The only slight change was that some of the players at West Forsyth played multiple sports and didn’t finish their seasons until later in the spring before school finished in June.

“It’s been a little different because we’ve been dealing with some kids playing some other sports,” Snow said. “…But we worked through that because we understood their time was taken from them. We’re ready to go.”

Summer workouts for the West Forsyth football team consists of three days of running and lifting, and one day of practice, according to Snow.

“We have four days a week,” he said. “And we go in the mornings. We normally go 9-12. And our kids, they understand what’s going on. We’ve done our 7-on-7s, we’ve done all of that. We’ve done all of those things. Now, it’s just time to get ready and go. And that starts on Monday.”

The key to the dog days of practice of practice in August is practicing as early as they possibly can.

With less than three weeks to practice and prepare before its first regular-season game on Aug. 20 at home against Asheville Reynolds, there is much to do in a condensed period.

“The good thing is, we’ve laid a foundation already,” Snow said. “We’ve had mini-camp last week, so the kids know what’s going on. So we kind of get back in there and fine-tune some stuff this week because you can’t have contact until Saturday. You start having contact and make sure you’re straight on what to do, how to have contact, what’s going on there, and then just kind of get ready.

Although West Forsyth and every other football team played a spring season this year, teams used the spring in many ways to get ready for the fall season.

“We basically had spring practice, so it was kind of nice in that sense,” Snow said. “So, most of our kids kind of know what they can and can’t do. So, we try to put them in spots and see if they definitely improved on this and that. Put some new kids in, and it’s just where we’re at now.”

The Titans finished 4-1 overall this past spring.

“It’s good that we got to play,” Snow said. “That was one of those deals. We’re trying to get back in the swing of being regular now, and here we go.”

West Forsyth has two scrimmages — at home on Aug. 11 against Mooresville, and Aug. 13 against Maiden at Mooresville — before it opens the season a week later.

“At the end of the day I think you’ve got to prepare yourself,” Snow said. “We go all the way, basically we prepare for the 11th, knowing what we’re going to have to be able to do as of the 11th. And then on the 13th, we kind of put a full thing out there because we do all the kicking on the 13th. So all of those are vital.

“There’s practices and we’re just trying to get ourselves ready.”

In sense, the game against Maiden on Aug. 13 will be a dress rehearsal for the regular-season opener seven days later against Asheville Reynolds.

“It’s a half of football, so we do the best we can,” Snow said. “I don’t think you can run around scared about injuries. Injuries are part of our game. Sometimes it happens, sometimes it doesn’t. We do the best we can to get our kids prepared and move on, and see what happens. But we don’t, when I say we don’t worry about injuries, we don’t want anybody to get hurt. We’ve got to prepare our kids.”

West Forsyth wants to move on from the spring season after being 4-0 before the final game at Davie County. However, Davie County tripped West Forsyth 36-35 in overtime. West Forsyth finished the season 4-1 overall and 2-1 in the Central Piedmont 4-A, missing the NCHSAA Class 4-AA playoffs by conference winning percentage.

In addition to the home game against Asheville Reynolds on Aug. 20, West Forsyth plays two more nonconference games — Aug. 27 at Oak Grove, and Sept. 3 at Weddington.

“It’s all about day-by-day,” Snow said. “We’ve got to try to get better on Monday, see what happens. Then we’ll turn it around and go do it on Tuesday. I think sometimes we talk too much — people talk about state championships.

Following those three games, West Forsyth will be off on Sept. 10 to prepare for its Central Piedmont 4-A conference opener on Sept. 17 at home against Mount Tabor, which rejoins the conference after having been in the Piedmont Triad 3-A since the 2017-18 school year. Also, Parkland rejoins to conference to have an eight-team conference consisting of West Forsyth, Reagan, Davie County, Reynolds, Mount Tabor, which won the NCHSAA Class 3-AA state championship in the spring, Parkland, East Forsyth, and Glenn.

“It’s a great league top to bottom,” Snow said. “You’ve got to be ready to play every Friday night. It should be fun.”

East Forsyth and Glenn were in the Metro 4-A until the 2016-17 school year, but they both moved into the Central Piedmont 4-A, Since Mount Tabor and Parkland have rejoined, and East Forsyth and Glenn have remained, it creates a conference where there are rivalries among the seven 4-A teams in Forsyth County, as well as Davie County, which is just on the other side of the Yadkin River.

“It’s one of those things where it looked like the natural thing to do in our area,” Snow said. “They did it so it’s what we’ve got, so we’re going to play the best we can and see what happens in this league. A lot of great players, a lot of great coaches.”

The Titans lost 18 seniors from last season, but like every other season, they should compete for the conference title.

“We’ve got some good young guys we’ve plugged in there and will do some good things for us,” Snow said. “So, at West Forsyth, nobody wants us to rebuild. Everybody always wants to reload. And at the end of the day, we’ve got to kind of plug them in there and see what happens.

“There’s still some unknowns. We’re just looking forward to trying to figure them out.”

After losing just one game this past spring, and losing 6-foot-4, 335-pound offensive lineman Jared Wilson, who signed with Georgia, 5-11, 187-pound running back Nasion Johnson, and 6-foot, 185-pound defensive back/punter Jake Hill, who just played in the East-West All-Star Game last month, the Titans still have plenty of building blocks.

“I think they’ve got a chance to be really special,” Snow said. “We’ve got a good group of kids that have worked real hard. Defensively, I think we’ve got a lot of returners coming back. And offensively, we’ve got some key pieces that are really talented. So, it’s an exciting time.”

Offensively, the Titans still have 5-11, 201-pound senior running back Jevante Long. Long and Johnson combined this past spring to have one of the most dominating running back tandems in the area. And the Titans will have junior quarterback Kian Bailey, who is 6-3, 180 pounds.”

“Jevante Long is as good as there is around here, and in the state,” Snow said. “Great kid, great player. He does a great job. We’ve got some other kids that are talented…West Forsyth’s always going to have good running backs.”

“Just a talented group of kids,” Snow said. “Man, they do a great job.”

The Titans also have the benefit of having some depth. Snow said that he expects about 120 players combined will play JV and varsity football at West Forsyth this season.

“It’s a great place to be,” he said. “It’s a great school. Football is valued there and kids know it, and they’re excited to be a part of it.”