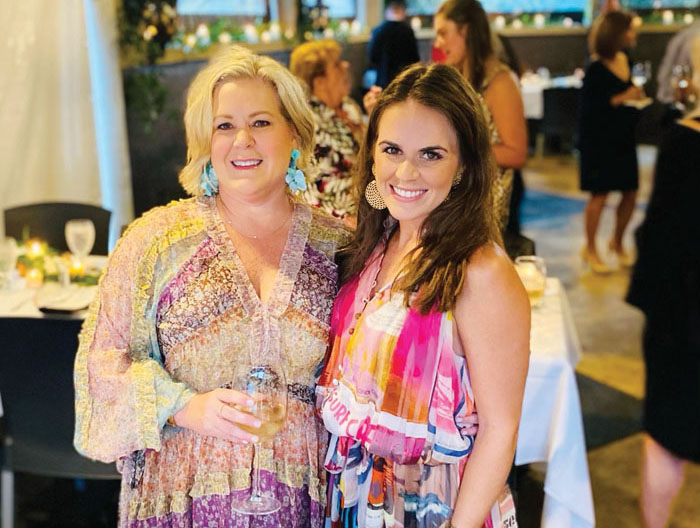 Lori White with her and her daughter, Morgan Cooper.

Lori White grew up in Kernersville as the youngest of two children. “From the age of 16, I always had a job and enjoyed working. I worked as a hostess at a restaurant, Belk, and then headed to East Carolina University (ECU) to study psychology. I had decided on ECU because of a teacher that I had in high school at East Forsyth, Mike Butner. He had talked about ECU and his great experiences that he had there. I of course loved to be near the beach,” recalls White.

Shortly after graduation from ECU, White began working at Piedmont Airlines as a gate agent. “I had moved back home and met my future husband, Larry. We met at the original Village Tavern, so of course, we now have all of our anniversary dinners there,” laughs White. “We have been together 36 years now.” Larry and Lori had a shared passion for sales in common. “When Piedmont merged with the USAir, I decided to really embrace that love for sales. I went and worked for Ed Broyhill as a customer sales representative. I gained valuable sales experience selling furniture,” reflects White. “I then transitioned to staffing and began my own staffing business in 1999 called Carolina Placement with Larry. We are able to place people in temporary and temporary to permanent positions.” White’s now 22-year-old business has also allowed her to help people in her community too. “We are very active with the Hispanic League in Winston-Salem. We sponsor a Hispanic/Latino student for an academic scholarship towards a four-year college every year through them. The partial academic scholarship helps defray costs for them to attend school. We’ve seen two students graduate already from our partnership and it was really neat to see them take advantage of the opportunity awarded to them,” says White.

White believes giving back is something that is important. “Giving back to our community has always been something I have wanted to do. My team at Carolina Placement believes in it too. We are all very active with the Hispanic League, and also with the Winston-Salem Street School. They help at-risk youth with providing a private alternative to receiving a high school diploma,” explains White. “Once they graduate, we are then able to help them find employment opportunities. Having people in their corner is important after being in situations where they didn’t get support for a variety of reasons in their family lives. It also shows them how to be financially independent.”

White’s professional and philanthropic contributions have been important to her as a parent. Mom to daughter, Morgan (30) and son, Chandler (27) was excited to share her passion with her work ethic and making a difference with them. “Morgan and I recently opened up a boutique in Thruway called Hive,” says White. “It’s a contemporary women’s store with mostly clothes but also some gifts that we opened in April. We’ve been open now for 90 days and I’ve really enjoyed working with my daughter in a business environment.” The philanthropist is of course, excited to see her newest business adventure also impact the community with new opportunities. As Maya Angelou once noted, “One most know not just how to accept a gift, but with what grace to share it.”