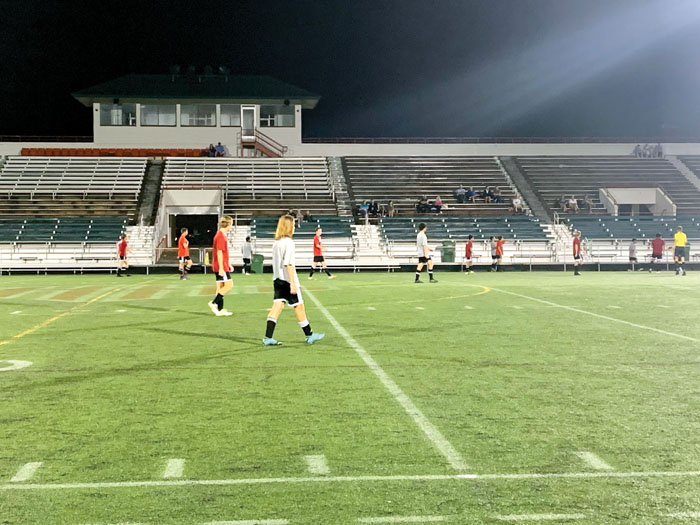 It’s just mid-August, but fall sports teams at West Forsyth and across the state will start next week competing in regular-season games, matches and meets in fall sports.

The Titans’ football team will start next Friday at home against Asheville Reynolds, but earlier in the week, teams in boys soccer, volleyball, girls tennis, boys and girls cross country, and girls golf will start its regular seasons. But these teams won’t just be playing any of these sports without any preparation. They’ve been working out all summer, and fall practices started Aug. 2.

The West Forsyth boys soccer team will defend its Central Piedmont 4-A title after finishing 11-3-1 overall and 9-0-1 in the conference.

The Titans lost six seniors from that competed earlier this year because of COVID-19, including Jesse Guzman, who played in last month’s East-West All-Star Game, as well as Jack Watkins, who moved to Wilmington. But that doesn’t mean the Titans are bereft of talent.

The Titans have 13 returning players, including senior midfielder/forward Daniel Bustos, senior defensive midfielder Walker Paschold, and junior attacker Alex Flores. Paschold’s younger brother, Haegan, is a freshman and will be playing outside forward.

West Forsyth finished well ahead of East Forsyth (7-6-2, 6-3-1 Central Piedmont 4-A) and Reynolds (8-5, 6-4), which finished runner-up in the 2019 NCHSAA Class 4-A state championship, in this past season’s conference standings. In addition to those teams, as well as Reagan, Glenn and Davie County, two more teams from Forsyth County will join the conference this season. Mount Tabor and Parkland, which previously were in the Piedmont Triad 3-A, are back in the conference after four years.

West Forsyth finished last season on March 16 after losing to Raleigh Athens Drive in the first round of the NCHSAA Class 4-A playoffs. So, in a sense, the Titans had an extended spring practice.

“And so they haven’t played all the time, but I think they’ve had a decent break. It’s thrown them off a little bit from I guess from normal summer workouts With a lot of the restrictions being lifted, people going on vacation more, it’s just sort of an odd time, I think.”

Just like with any other team, the West Forsyth volleyball team had its previous season altered. The Titans started their regular season last year on Nov. 17 and finished their 10-game season on Dec. 17.

The Titans played all conference games last year and finished 5-5. missing the playoffs. 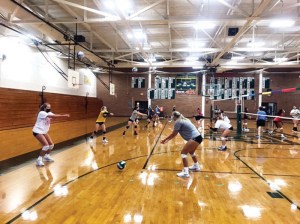 The players and coaches are wearing masks, much like last season, to help prevent the spread of COVID-19.

“For the team last year, like the first practice we had with a mask, it was one of the weirdest practices I think for all of us because in volleyball and most sports so much communication is involved. And there’s so many changing factors on every single ball that goes over the net,” Gillon said. “So when that communication is hindered I think it caused a lot of shutdown and breakdown of what was going on.”

After nearly a year of their having to wear masks, the team has been more acclimated.

“We’ve had more time to get used to everything,” Gillon said. “I think they’re just more used to it, really.”

The Titans lost seven seniors, which is the most they’ve lost since 2014, Gillon said.

“It’s not ideal, but we’ve had a ton of kids that just kept developing throughout the program,” she said. “We added a couple along the way…I think experience just speaks for itself really in any sport. The longer you play the more you know.”

“We just have three really well-rounded seniors that have strengths in different areas, which I think will be really helpful.” Gillon said.

“After losing seven seniors I feel like, for me, I’m kind of taking it day-by-day, practice by practice,” Gillon said. “I have a strong group of athletes, I have a strong group of volleyball players. And I always have confidence in the group that I have. I think it’s kind of hard to say, like after losing seven seniors it’s kind of hard of hard to say, this is where we’ll be. We have a whole new group.”

If it feels like just yesterday since girls tennis finished. Girls tennis was pushed back to late in the school year this past year, and the West Forsyth girls finished its regular season on June 3. And for some players, the season didn’t finish until late June. 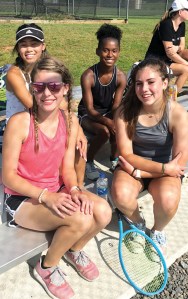 “Court 6 gives you the same amount of points as Court 1,” Krenz said. “That’s the team. There’s pressures on every court. You know, if you’re placing somebody on their ability on the court they should have a good and equal match with whoever they’re up against in parameters.”

Krenz said playing in the spring was a benefit.

“There was a little bit of momentum,” she said. “The downside is usually every October myself or my husband will give them a little checklist, and say, ‘OK, this what we want you to work on before next season.’

“Maybe it’s changing your serve grip, whatever. So, I didn’t have so much time for people to work on things. But the momentum and being in communication even though we haven’t had tennis practice together (during the summer) has been good.”

“And I’ve said, though, we’ve got our work cut out for us because I feel like you should never kind of sit back and think. OK, ‘Hey, we just won, we’ve got this’ kind of thing.”

Cross country at West Forsyth has always been strong, and didn’t doesn’t appear to be changing anytime soon with Coach Nathan Newsome.

“I think we have a good crop of some new girls that are going to help out,” Newsome said. “And some of those that have not been those top-tiered girls now are and they’re pretty well prepared.”

Reagan won the Central Piedmont 4-A last season, but West Forsyth should be right there, along with Reagan and newcomer Mount Tabor.

“I think we can win the conference,” Newsome said. “It’ll be tough. I think with Mount Tabor being introduced, I think they bring a strong group back. And Reagan, of course, will always be good.”

Despite finishing runner-up in the conference to Reagan last season, it could be motivating factor for West Forsyth this season.

“So, I think with some renewed normalcy I think they’re excited to compete. We’ll see how things shake out once we can kind of see how good the conference is. Rather than being just us and Reagan, now it’s going to be us, Reagan and Tabor.”

“That’s kind of where of where we’re at now,” Nathan Newsome said. “Brandt and Wesley were really strong in the region. Dyllan and Kadin also ran varsity for us last year. And the rest of those of those guys are kind of like those girls last year — they were kind of the JV-type runners. And now they’ve kind of moved up into a more important role. They’re looking pretty good.”

The boys hope to capitalize after winning last season’s Central Piedmont 4-A championship, as well as winning the regional.

“I would think that we would be expected to be rebuilding and not as good,” Newsome said. “But I think we’ll surprise a lot of people. I think we’re going to be good. Mount Tabor, I think on paper especially, looks to be the top in the group, and that’s fine. I’ll let them be the one taking the bulls-eye as far as that goes because if they don’t win with everybody that they now have on their team then that’s tough for them.”

Much like other sports, the girls NCHSAA Class 4-A state championship was held much later than normal, concluding on May 11 at Pinehurst No. 1.

“It’s great to be back to normal,” Walwik said. “We’ve got (12) matches scheduled, which is good number. Seven conference matches and five nonconference matches. We look pretty good this year.”

Unfortunately for West Forsyth, it competes in the Central Piedmont 4-A with foe Reagan, which captured both the team and individual state championship after Reagan defeated runner-up Cary Green Hope by eight shots, and Reagan’s Macy Pate won the individual championship by one shot against Wilmington Laney’s Grace Holcomb.

“I really think we’re better than anybody else outside of Reagan,” Walwik said. “If we just play golf, which we know we can, I don’t think it’s a problem.”