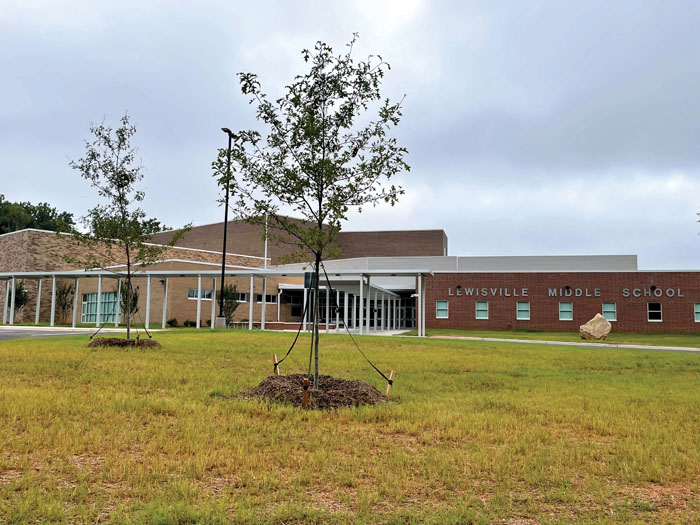 The first day of school will be Monday, Aug. 23, at the new Lewisville Middle School. Charles McAninch is serving as the principal. Photo by Jim Buice, for the Clemmons Courier.

Traffic to be monitored at new Lewisville school

With the start of the Gateway Project delayed once again, concerns over potential traffic slowdowns in Lewisville will shift to the north end of town with the opening of the middle school.

Town officials were hoping that a proposed roundabout at Lewisville-Vienna Road and Robinhood Road, which was originally scheduled to coincide with the arrival of the new Lewisville Middle School, would help immediately with traffic flow.

However, since that project was pushed back to 2022, Mayor Mike Horn is hoping for the best while working with DOT and local Forsyth County Sheriff’s Office deputies to monitor the traffic.

“My understanding is that there is ample stacking on site at the school to move folks onto school property quickly,” he said. “There will also be a traffic person at that entrance to direct. The intersection of Lewisville-Vienna and Robinhood Road also has potential for backup.”

Meanwhile, Town Manager Hank Perkins said in last Thursday night’s town council meeting that going through the bid process a second time failed to draw any response for the long-anticipated road improvement project from the U.S. 421 interchange extending to the roundabout at Shallowford and Williams roads. 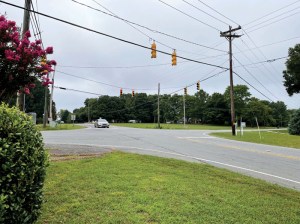 Earlier in July, Perkins gave the most recent timeline for the start of the Gateway Project, stating that bids were due later that month with a projected construction start in September. Now, it will be sometime in 2022 at the earliest.

“We have been through two advertisements, and both times we have received no interest in the project,” Perkins said. “The primary reason we see for lack of interest is just the state of the economy and the amount of work present for contractors. They are just too busy right now. That’s a good thing for them and a bad thing for us.

“What we’re planning is to delay for a while the re-advertisement and be strategic with the project being available at the end of February and then with timing with the DOT and the contractors. What we’re hoping for is they will look favorably on this project because it will go for on eight months. From a business perspective on a calendar year, we think that will improve chances to gain interest and move forward with the best project we can from a dollars and cents standpoint.”

Horn added, “simply put, right now there are more projects than contractors with the larger and more profitable projects getting the most attention.”

The project covers the U.S. 421 interchange toward the bridge and through, and on Williams Road continuing between that interchange and the roundabout at Shallowford Road with a planted median being installed. Wider lanes in that segment will be provided to accommodate cars and bicycles along with curb and gutter, sidewalks, street lights and landscaping.

Perkins added that another variable has entered the equation that could impact the Gateway Project, the Lewisville-Vienna Road and Robinhood Road roundabout project and others that may be in the works. It’s called the federal Endangered Species Act, which includes animals and now plants.

“We have to add a study for this endangered plant,” Perkins said. “The plant only grows in the public right of ways. The difficulty in this is that you only have a window from August to October to complete your study. If you do not study during that time period when the plant is supposed to be present, you can’t move forward with your project.

“The Gateway Project is going to have to be studied because we haven’t had shovel in the dirt right now because we’ve been through two advertisements. So we’re going to add that to study the corridor for the plant as well. We’ll be studying for the plant at the intersection of Lewisville-Vienna and Robinhood.”

As Perkins said, “if we started a preliminary engineering study, say November, December, January, if you can’t study and look for a plant until August, you’re stymied. When we come back (to meet) in September, we’re going to have a lot more conversation about looking for this plant.”

In another item, the new Mary Alice Warren Community Center is progressing toward completion, but Horn said that nothing has been finalized about an official opening date and dedication ceremonies.

“The actual opening was to be sometime in October and may still be,” he said. “However, we are being very careful about the opening date because of the delta variant. We expect that we’ll have hundreds of residents who will want to tour the new community center, and we want to do the opening at a time when it will be safe.”