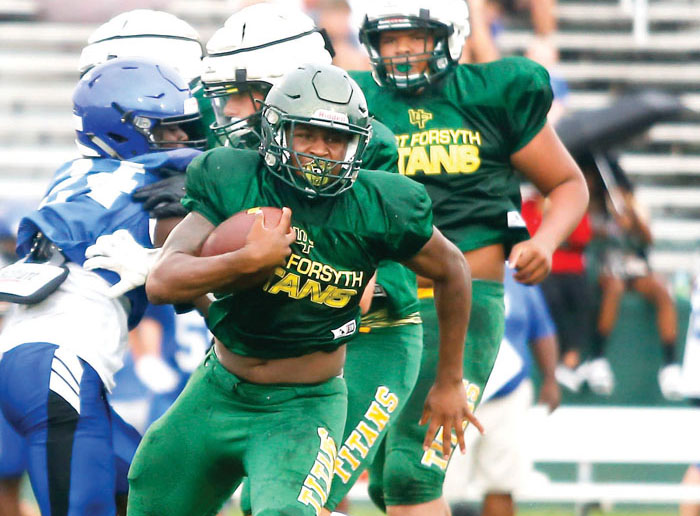 West Forsyth running back Jevante Long, who's a senior. Photo by Brad Richard. To view and order photos, go to https://www.ncprepphotos.com/

High school football starts across North Carolina on Friday night, and with that comes plenty of excitement.

But with all the excitement comes a lot of question marks for all teams. That’s certainly true for West Forsyth as it prepares for its opener at home against Asheville Reynolds.

The biggest question might be the health of Coach Adrian Snow. Snow missed the first two weeks of practice after having a kidney stone. Snow has been in contact with the team and coaching staff, but he’s allowed for offensive coordinator Sean Joyce and defensive coordinator Jonathan McIntosh to be the acting coaches while he’s out. It’s possible that Snow could coach on Friday night, but as of Monday afternoon that is still a big question mark.

Both Joyce and McIntosh said it’s day-to-day, but they have prepared all week for its first game against Asheville Reynolds.

“I’ll be honest with you. We miss him,” Joyce said. “…But it’s a testament to Coach Snow. He’s done such a great job in his tenure here as far as running a program. It has continued to run very smooth. Coach Mac (McIntosh) has taken care of things defensively. I take care of things offensively.

“It ain’t the same without him here, but it is still running smooth.”

The problem with the kidney stone has persisted since the end of this past school year, according to Joyce.

“He’s been battling it all summer,” Joyce said. “There have been days that he’s been struggling with it. I think he finally, three weeks ago decided to have it busted up. But, yeah, it’s been something he’s been dealing with for a while.”

Joyce is in his third season as the offensive coordinator.

“I’ve worked with Coach Snow before,” he said. “Actually, I played football for him in high school. I coached with him in his first head-coaching job for two or three years. He and I played for the same head coach in Alex Mebane, so it’s not that big of a difference. It’s just how you show up and continue to work, and do the same things we’ve been doing.”

The biggest difference for Joyce and McIntosh is just not having Snow around.

“He handled so many things on the field and off the field, it allowed us just to focus on just coaching defense and focus on coaching offense,” McIntosh said. “And now, we’re having to split up responsibilities with who’s going to check the players in each day, who’s going organize pre-game meals, who’s going to talk to the referees? All those things, so everybody’s had to step up and take on a little more responsibility.”

McIntosh has been an assistant coach for all but one season since Snow has been the head coach at West Forsyth.

Knowing the ins and outs of running the program has been important.

“We’ve seen how (Snow) runs the program and we’re just trying to do our best to imitate what he would do, and just keep things running smooth and keep the ship sailing,” McIntosh said.

McIntosh’s role as a coordinator will remain the same.

“This is my third year as the defensive coordinator, so nothing defensively has changed because I’ve pretty much been in charge of the defense for the last couple of years,” he said. “So, it’s just the added roles that we’ve all picked up since he is not here.”

Joyce and McIntosh’s roles will depend on Snow’s health.

McIntosh said that Snow has sent a weekly schedule and has watched film. Snow even watched film of the first scrimmage last Wednesday at Jerry Peoples Stadium with Mooresville. He was able to watch the final scrimmage last Friday against Maiden online through NFHS.

“We’ve just really tried to get personnel where it needs to be, trying to get the guys understanding exactly what it is we want them to do,” Joyce said. “I mean, let’s be honest, it’s been the same. Scrimmages are a practice…

“There’s no winner or loser. We’re just trying to get better.”

If nothing else, the two scrimmages broke up the monotony of practicing against each other for nearly two weeks.

“I think the biggest thing for our kids is, they got a chance to hit and tackle somebody else besides each other,” McIntosh said. “So, everybody was excited. The kids were excited. We were excited. And you know, the real stuff’s right around the corner once you get done with the scrimmages.”

There were just two days between the scrimmages with Mooresville and Maiden.

Since the final scrimmage was last Friday against Maiden, West Forsyth has its normal full week to prepare for Asheville Reynolds, whether Snow is able to coach or not.

“It’s preparation week,” Joyce said. “It’s the same as always. We met as a staff. We broke down film. We talked about personnel. We made sure everything’s where it needed to be. And have practice plan ready to go, and just come in (this past Monday) to implement it.”

Junior Kian Bailey played most of the snaps at quarterback this past season when the Titans finished 4-1 overall and 2-1 in the Central Piedmont 4-A. However, Joyce said that Bailey has been moved to receiver, but could play some quarterback. Joyce said that sophomore Bert Rice started at quarterback against Mooresville last Wednesday, but Bailey started Friday against Maiden.

Senior Chris Van Kleeck, who has predominantly been a middle linebacker, also played at quarterback during the scrimmages. Joyce said the starting quarterback won’t be known until just before game time against Asheville Reynolds.

“It’s hard to say,” Joyce said. “They both (Rice and Bailey) bring different things to the table. Bert throws the ball really well, but he’s not as big of a runner. Kian is more of an athletic quarterback, who does a better job running. They both did some really good things. It just kind of depends on what’s going to be best for us this week.”

“We’re very young offensively right now.” Joyce said. “Up front, right now we’ve got a senior in (Jacob) Wolf, and he’s our center. He’s the only senior we’ve got right now. And then we’ve got a couple sophomores and juniors, so we’re pretty young up front.”

And even though the Titans lost dynamic running back Nasion Johnson to graduation, they still have senior Jevante Long, who was part of a two running back attack for the Titans. But linebacker Mack David is expected to play running back.

“Our running back, Tay (Long). He electric,” Joyce said. “He’s going to do great things for us this year. Mack David, he’s going to carry the ball for us some, and looks great. So, we’ve got some skilled guys. Bralen Moore at receiver, he may be one of the best in the conference. He’s done really good things in the two scrimmages.

“So, although we’re young and we’ve got some things to shore up, we did a lot of good things in both scrimmages that were exciting.”

David might be the spark plug that the Titans use on occasion.

“Mack David is probably our best defensive player,” Joyce said. “We’ve got to have him offensively. We’ll use him sparingly, but we’re not afraid to use him.”

The Titans should be stout on defense even though they lost defensive back Jake Hill, who played this past summer in the East-West All-Star Game in Greensboro, to graduation.

“Right now, we have a really experienced defense,” McIntosh said. “We have, I think, eight starters returning from last year’s team back. So, D-linemen, we’ve got some more depth than we had last year. David Eldridge is a senior in the middle. He’s going to anchor the D-line at nose guard. And of course, we’ve got Mack David at linebacker, who is a stud. I mean, he’s an all-state linebacker.”

McIntosh said that David’s brother, Caleb, will play beside Mack at linebacker. Aquavian Rush will play outside linebacker, along with Avery Salerno, and Don Robinson is at cornerback.

“We’ve got an experienced team,” McIntosh said. “We have high expectations for them. And hopefully, we can live up to those.”

It’s always a little problematic for the first game of the season when you play against a team that you have no game film on from the previous game. Asheville Reynolds finished 7-2 overall and 6-0 in the Western Mountain 3-A conference during the spring season because of COVID. Shane Laws is the head coach of the Rockets, who lost to Charlotte Catholic 27-0 in the second round of the NCHSAA Class 3-AA playoffs.

“We have film from their scrimmage,” Joyce said. “And we’ve been able to watch it a little bit.”

“We’ve played this team before,” McIntosh said. “We know they’re well coached. We know that they’re a talented team. And our kids are going to go out and compete and do the best they can. And that’s all we can ask of them. Whatever the outcome is, if we give 100%, then we’ll live with it.”

Asheville Reynolds is the first of three nonconference games for West Forsyth — Aug. 27 at Oak Grove and Sept. 3 at Weddington — being the other two. The Titans will be off on Sept. 10 before starting the seven-game Central Piedmont 4-A schedule on Sept. 17 at home against Mount Tabor, which won the NCHSAA Class 3-AA state championship in the spring.

“I think we get tested early. I think with any program, a top-tier program wants to be tested early, especially in the conference that we’re in,” Joyce said. “And I think we will be tested. Hopefully, we’d like to win every game. That’s out goal. But I think the talent that we’re going to face gives us a good judgment of where we’re at right now as a team.” 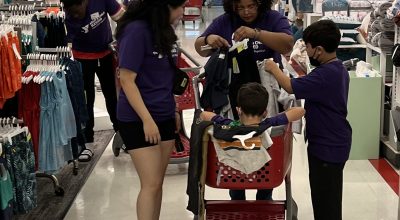 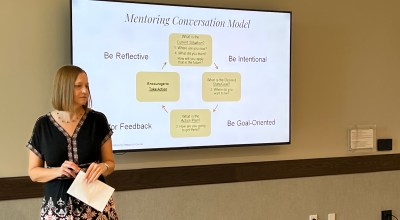 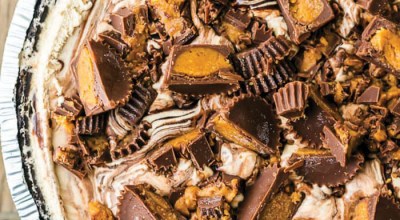 Bless Your Spoon: Beat the heat by chilling out 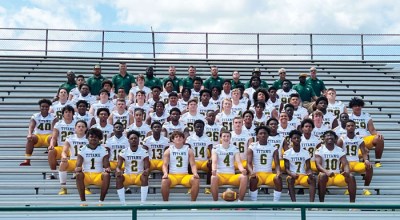 Fall Sports Preview — The Friday Night Lights are upon us