West opens season with win over Asheville Reynolds at home 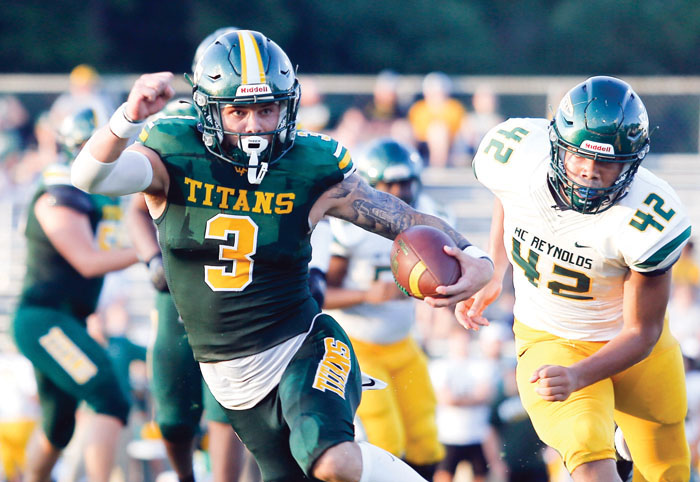 The West Forsyth football team opened its season with a resounding 37-7 win against Asheville Reynolds at Jerry Peoples Stadium.

However, the game almost became secondary with the health of Coach Adrian Snow. Snow has dealt with a kidney stone most of the summer and missed the first three weeks of practice. While with the kidney stone he developed COVID-19 and was admitted to the hospital on Sunday, Aug. 14. As of Monday morning, Snow, according to offensive coordinator Sean Joyce, who is one of the two acting head coaches, along with defensive coordinator Jonathan McIntosh, was still in COVID protocol. However, Snow is feeling better. According to the coaches and officials at West Forsyth, it is unknown when Snow will be back coaching the Titans.

Following the game this past Friday against Asheville Reynolds, Principal Kevin Spainhour of West Forsyth spoke about Snow.

“This was a great win for West, a great win for our coaching staff, under the circumstances,” Spainhour said. “Coach Snow, obviously watched the game from (the hospital). He was texting me during the game. But Coach Snow is struggling still. He’s progressing well, but he is dealing with the impact of COVID right now.”

In the meantime, Joyce and McIntosh will remain as the acting head coaches. West Forsyth plays at 7 p.m. Thursday night at Oak Grove in Midway.

“He is hospitalized, but we’re expecting him to return home soon, and hopefully he’ll be returning to the sidelines,” Spainhour said.

“The Snow family wants to thank everyone for the huge outpouring of love during this difficult time. Prayers are being answered and Coach Snow is improving daily — with today being the best yet with the oxygen levels and lungs. We thank you for being here for us and appreciate continued thoughts and prayers. Gina, Macy and Coach!!!”

The key is that Snow is getting better.

“He’s getting better every day,’ Joyce said. “Who knows? It could be two days. It could be — who knows? I just know that we FaceTime — Coach Mac and myself try to FaceTime him at least two or three times a day. He wants to make sure the offense is right and the defense is right. But the last two or three days, you could see a huge improvement as far as him being able to talk. 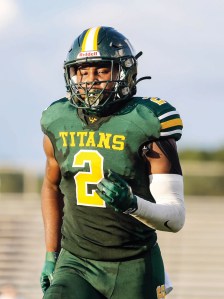 Not that West Forsyth needed any motivation to play Asheville Reynolds last Friday, it used Snow’s improving health as a chance to be ultra-focused.

“Talking to the guys before the game, some of them had ‘Snow’ written on their wrist bands,” Joyce said. “And there was banners up in the stands, ‘We’re playing for Coach Snow,’ and all this. When I talked to Coach Snow, he said, ‘Don’t make it about me. This is not about me. It’s about those guys in the locker room. They need to play for each other.’ I relayed that to them.

“They were ready to play. Knowing that he wasn’t here they wanted to make sure they made him proud, as well.”

Despite having coached the team for the first three weeks of practice it was quite the juxtaposition for Joyce and McIntosh.

“Once 7 o’clock got here it was easy because Coach Snow, literally on game nights, Coach Snow lets me run the offense and Coach Mac run the defense,” Joyce said. “So, we are accustomed to that. Everything leading up to that point with all the minutiae and things that he has to take care. I know a head coach has to do a lot, but he does a lot.

McIntosh also echoed what Joyce said about all the responsibilities Snow has as the head coach of a large NCHSAA Class 4-A school.

“Busy,” McIntosh said. “I’ve got a new respect for what Coach Snow does, that’s for sure.”

There was still the pomp and circumstance that goes with a high school football game, especially the season opener, but it was different not having Snow there.

“We miss him like crazy,” McIntosh said. “We hope he gets back as soon as he can. Just his presence on the sideline is a good thing for us.”

Snow has been the head coach at West Forsyth for 13 seasons, and the Titans are perennially one of the best teams in Forsyth County.

“Coach Snow has done such a great job with a program,” Joyce said. “From who he learned it from to him. He has placed people where they need to be, and the kids understand what is expected. So, just like today is a great example. Although he is not here, he’s here because of what he’s exhibited.”

As far as the game this past Friday, it was pretty much smooth sailing for the Titans (1-0) as they beat the Rockets by 30 points. The Titans scored first with 4:47 left in the first quarter after quarterback Chris Van Kleeck fired a 30-yard pass to Bralen Morris to help the Titans take a 7-0 lead.

It didn’t take long for the Titans to score again. Running back Jevante Long scored on a 1-yard run to help extend the lead to 14-0 with 2:24 left in the first quarter.

“At the beginning of the game, I felt like we had some new people in new positions,” Long said. “So, I feel like we just had to like to be able to understand the roles that everybody was put in. And once we understood that, we were pretty smooth after that.”

After having Long and now-graduated running back Nasion Johnson as running backs for the Titans during the spring season, Long is the featured back this season.

West Forsyth continued to clock on offense. With 6:59 left in the second quarter, Van Kleeck threw an 8-yard touchdown pass to Morris to help push the lead to 21-0.

“We struggled a little early, but that’s expected,” Joyce said. “We’re a little young up front. We only have one returning starter, so we kind of expected it. I thought those guys, our offensive-line coach, Coach Benjamin, he was able to settle them down, understand what we needed, and just kept churning. Eventually it’s going to break and work.”

West Forsyth had 111 total yards at halftime compared to just 49 for the Rockets. However, despite the comfortable lead, the lone blip for the Titans happened in third quarter. West Forsyth kicked off to start the second half, but it was called for offside. On the ensuing kickoff, Max Guest of the Rockets caught the ball around the 10-yard line and scampered 90 yards to a touchdown just 16 seconds into the third quarter to help make it 21-7.

“You know how high school kids get?,” Joyce said. “Coming back down, they were all jacked and excited. I want ’em to be excited, but also understand, hey, it’s 0-0 (in the) second half. If we were down 21-0, we’re going to expect to come back and win. Same thing for any other team we play. So, you’ve still got to come out, execute and finish the drill.”

The Titans regrouped, and Long scored on a 6-yard run with 8:29 left in the fourth quarter to help extend the lead to 28-7.

“In the first half, I would say I didn’t run as good as I would like to, but I feel like I got the job done in the second half when we came back out,” Long said.

“We had the interception over here in the corner,” McIntosh said. “I told Will Hayes, our safety, I mean we ran that play probably 10 times in practice throughout the week and he was sitting in the right spot, and I told him he couldn’t play it any better than he played it.”

After the interception, Long scored one play later on a 1-yard touchdown run with 8:15 left to make it 37-7, but the kick for extra point failed. Long finished with 96 yards rushing on 23 carries.

After the game, West Forsyth spoke about the game, Snow, and preparing for the short week for Thursday’s game at Oak Grove.

“It’s been weird not having a head coach,” Long said. “Coach Snow hasn’t missed a game in ever. It was different for his part, but if he was here, he would tell us just to play for each other. So, we tried to play for him, but we’re trying to get the job done. So, we’ve got great coaches, a great coaching staff, and we’ve got great players who listen. So, we get the job done.”

Although Snow was in the hospital last Friday night, with modern technology, he was able to see the game. He even took part in the post-game celebration in the locker room.

“He FaceTimed us in the locker room,” Long said. “I’m glad that he was able to see us play tonight.”

“Coach Holcomb does a great job preparing his team,” Joyce said. “And I expect a great game. Obviously, we hope we come out on top. We’ll be prepared. We’ll be ready.”