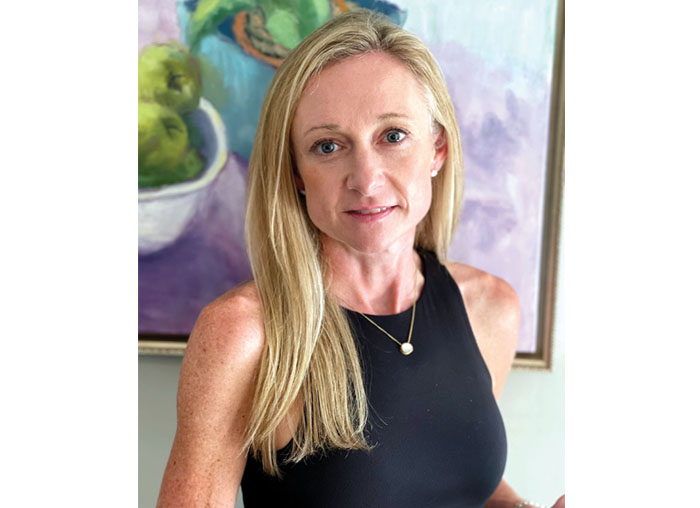 Elizabeth Foley grew up in Winston-Salem as the middle of three sisters. The close family enjoyed playing and excelling in both cross country and swimming. “I started swimming in summer league, and like my older sister joined what was then the WSY (now TYDE). A coach that really made an impact on me was Robin Jacobs. She was incredible and left quite a legacy. It was really sad when she passed recently,” recalls Foley.

Outside of the pool, Foley broke records as a cross country runner at Mount Tabor High School too. Averaging 19 minutes and 10 seconds a race, Foley credits her coach, Mike Esposito for helping her running career. “He did an excellent job with us, and went on to coach at High Point University,” says Foley. Coaches at the next level were also taking notice of Foley’s strength and versatility in both sports. “I was really interested in Sewanee: The University of the South because it is so beautiful. My grandfather, uncle and sister had all gone there, so naturally I wanted to take a look at it. Davidson College had also been on my radar too,” reflects Foley. As the valedictorian and athlete of the year for Mount Tabor’s class of 1997, Foley was able to make the choice herself and went to Sewanee and continued to swim.

Foley enjoyed her time at Sewanee and graduated with a bachelor of arts degree in economics and a minor in religion. “After I graduated, I took a year in between going back to school. I knew that I was ready to head back to North Carolina, but I wasn’t 100% certain what I wanted to do. In the interim, I went to Atlanta, Georgia, where one of my sisters was living. After that year, I ended up going to the University of North Carolina at Chapel Hill (UNC) for law school,” explains Foley.

While Foley was at UNC for law school she met her future husband, Paul, during her first year. “He was a year ahead of me, which was helpful with navigating school,” remembers Foley. “We started dating when we met and got engaged at the old well my last week of law school. We were married a year later.” Paul had spent his summers working up in New York and had plans prior to meeting Elizabeth to go there after graduation. “I had gotten barred up there as well just in case we ended up there, but with my family still in North Carolina, we compromised and decided to move to Washington, D.C., after law school,” says Foley. “During that time, we worked for some of the bigger firms and got that experience which was helpful.”

After five years in D.C., Foley headed back to North Carolina. “I knew that I wanted to live near my family again, so we looked at firms in Charlotte, Raleigh and Winston-Salem. Ironically, we both got offers in Winston-Salem, and we came back,” notes Foley. She began working for Blanco Tackabery. Foley’s passion was revitalizing historic properties and turning them into viable housing projects. “I loved revitalizing urban areas and being able to turn a historic property into a safe housing opportunity. I found it to be very rewarding. I knew early on in law school that I wanted to do urban development and public planning,” mentions Foley. Her expertise in that area made being appointed to the North Carolina Housing Finance Agency Board of Directors a natural fit as well.

As Foley was getting established again back in her hometown, she and Paul welcomed their first child, Grace, in 2011. “When Grace was born, we always knew that she was a differently wired child. From early on, we could tell that learning in an environment outside of mainstream school was going to be necessary for her. During her kindergarten year, I took a leave of absence to help figure out how to support her. We received an official diagnosis that Grace had autism, and so we wanted to provide all the resources that would help her thrive. Grace is twice exceptional with a learning disability, and I initially was nervous to put a label on it, but it was helpful to see her through a different lens,” says Foley.

While supporting Grace, Foley welcomed twin girls in 2013, Clare and Mary. “Adding the twins to the mix took a lot of balancing. I went back to work three months after they were born and was working about 20 hours a week. It was nice to have that professional side to life, and be a mom at the same time,” remembers Foley.

As the girls got older, Foley’s day to day looked a lot different. “In 2019, I stopped working at the law firm. It’s helped free up my time to volunteer at Grace’s school, West Lawn, which serves twice exceptional students,” says Foley. She helped get the school off the ground with rezoning the property for private school use. “It’s neat because it started last year with just six students and has almost doubled with 11 students ranging in grades third through seventh. Each child has a curriculum designed specifically to their academic needs,” explains Foley. When Foley isn’t volunteering to help at Grace’s school, she enjoys taking Clare and Mary to various extracurricular activities like swim team, dance and gymnastics. “The kids are at an age where they really enjoy these activities,” explains Foley.

Foley and her family also enjoy being active at their church, St. Paul’s Episcopal. “It’s the church where I grew up, got married, and baptized all the kids. It’s very special to our family,” says Foley who teaches Sunday school and is a circle leader in their congregation.

When not participating in extracurricular activities and church, the Foleys stayed busy welcoming a new family member this past June. “The big excitement for our summer was welcoming Grace’s service dog, Benjamin “Ben” Franklin to our home,” mentions Foley. “It took a while for us to get a service dog, but it has been such a blessing to Grace because he helps keep her calm in public spaces and all the girls just love him. He’s a standard poodle that was trained at Love and Lead and was a bright spot for everyone when he came home to us in June after two years of waiting.”

As Foley’s children head to school this week like many others, she is looking forward to continuing to support them and find ways to help out around their schools and in the community. “Although, I don’t work out in the same way I did when I was in college, I still enjoy going to a yoga class and playing tennis when it fits in my schedule. I did enjoy sports a lot growing up, so it’s fun to see it now with the girls and the valuable lessons it instills,” reflects Foley.